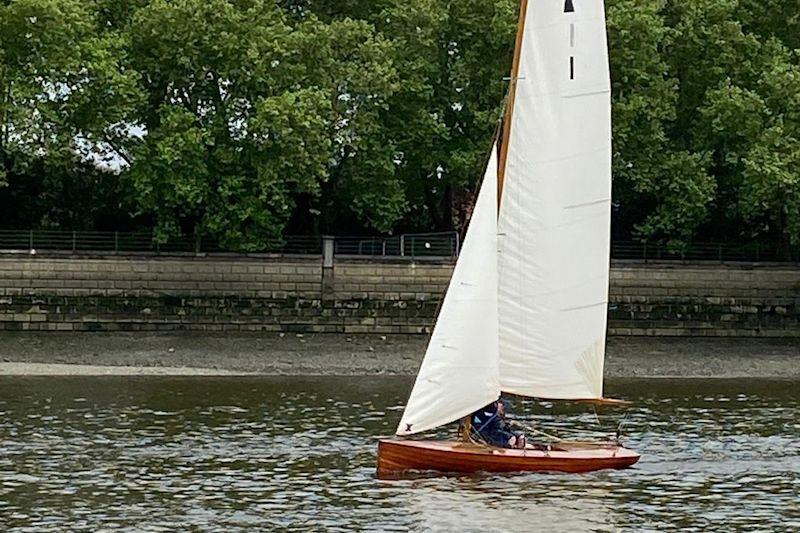 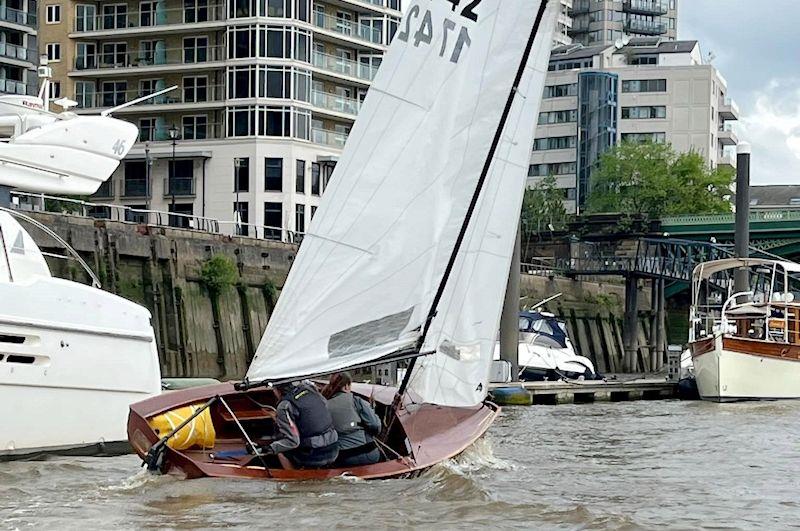 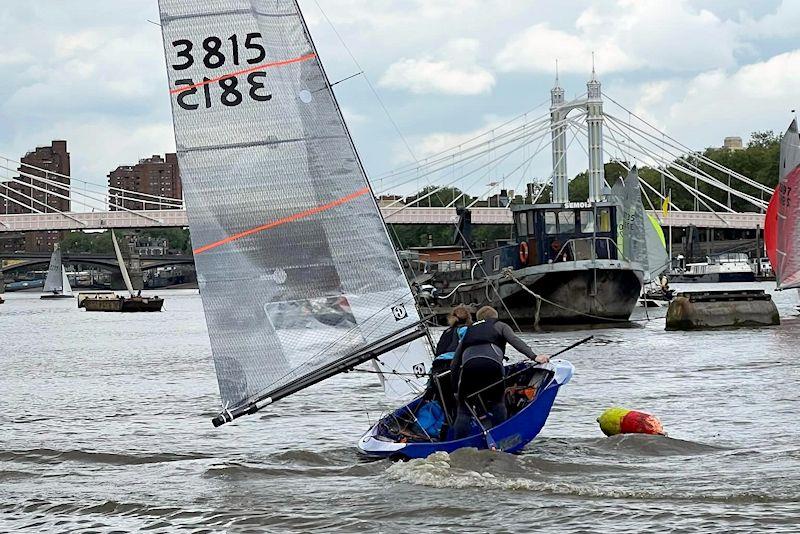 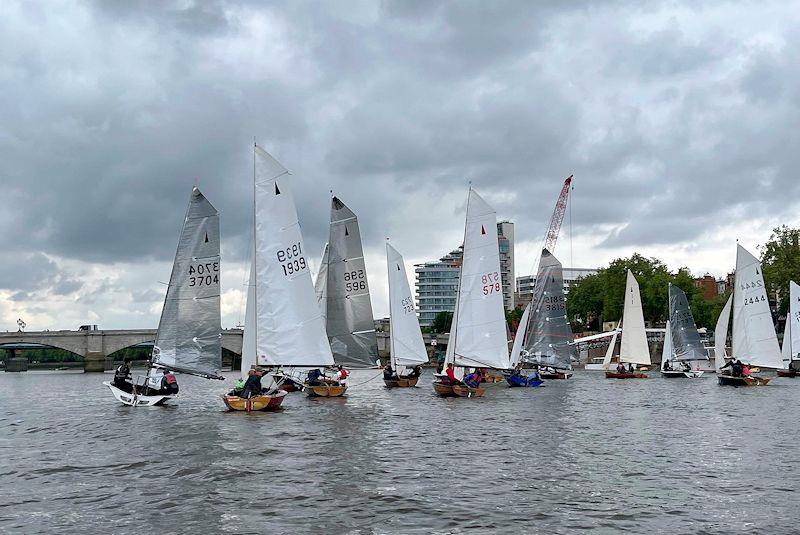 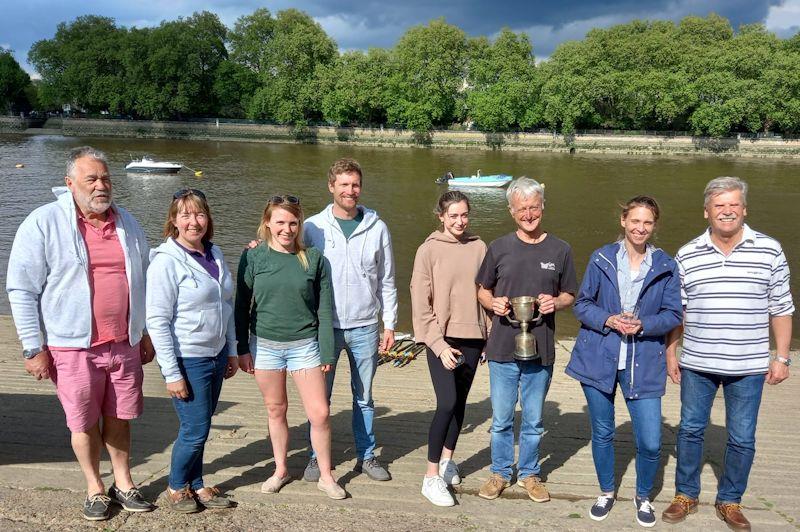 Saturday 7th May saw twenty merlin rockets arrive at Ranelagh excited about the prospect of the annual jaunt downriver from Putney to Battersea Park. Ranelagh SC were over the moon to have 13 visitors from as far afield as Lymington, Fishers Green, Medley, Wembley and various Thames based sailing clubs. Seven RSC merlins were excavated from the back of the shed, all beautiful, varnished wood.

Rigging on the embankment were the actual oldest and youngest merlins with Kate (merlin no.1) and The Kraken (no. 3815), later to finish in consecutive positions bringing up the rear of the top half. Kate, as ever was a joy to sail and the visitors in The Kraken looked like they'd had quite a nice race.

The briefing was held, with the bridge restrictions outlined in great detail. No spinnakers before Fulham rail bridge, don't go through the southern most arch of Putney Bridge and make sure you don't hit the scaffolding under Wandsworth Bridge. We'd be utilising our believed to be unique 10,4,1 starting sequence and rules regarding launching wouldn't be enforced enabling the Le Mans start should anyone fancy it. There would only be one buoy, try not to hit it or it would be a re-round dating back to the glorious 80s.

With a decent breeze most launched in good time and enjoyed practising their staying away from the line skills. It was primarily a beat downriver with the odd spinnaker hoist thrown in for good measure. Approximately 12 boats went under Fulham Bridge abreast with millimetres to spare and cheerful calls of room being called from both concrete legs of the bridge.

Leading the way were a group consisting of Rob and Hattie Cage in 1692 and Chris and Pip Kilsby in 3735. Tim and Ed Medcalf in 596 (returning to its birthplace at the ripe old age of 67) took their turn in the lead and Duncan Salmon and Ruth Hanstater in 3702 were always in the mix as were Stuart Jenkins and John Hollands and the Fishers Green brigade led by Christian Hill and Nick Yanna in 2997.

With the one buoy hidden away behind a barge on the park-side of the river, it proved for some to be surprisingly easy to hit, the Medcalfs achieving it on three occasions and Kate certainly hit it once. The buoy drop was timed perfectly with the tide turning to bring us home as the fleet rounded. The return had long downwind stretches with the occasional slow bit for the leaders allowing the mid-back of the fleet to catch up a little every now and then, but to no avail.

A battle royale ensued on the way home during which the world ended for some, but Rob and Hattie Cage emerged comfortable victors by the finish. Duncan Salmon (Ranelagh's most loyal visitor) and Ruth Hanstater won the next close battle from the Kilsbys who emerged ahead of John Heath and Nicola Scadden in 578.

First Classic were Richard and Mariela Burton in 3482 and the Cages took the de May vintage victory on a simple but effective handicapping system with wooden masts and small spinnakers being given time by the carbonators. Stuart Jenkins and John Hollands were second in 723 and Kate, sailed by Fran Gifford and Sophie Mackley took third in the de May results.

So the podium had two wide boats and a narrow boat, everyone had a wonderful time as ever and we all sat down for a wonderful butter chicken, with rice, daal and raita, washed down with beer from London's cheapest bar.

It was a two-man show with Brian Clarke doing the catering, the start sequence, rescue boat 2 and back in the box to note the finishing times and Commodore James Hayward doing entries, rescue boat 1, photos, mark laying and results. Thank you to Brian and James for making it work with joy in their hearts and their smiles.

The Thames, de May and Classic series is generously sponsored by Craftinsure with hoodies and water-bottles distributed amongst the many prize winners. The series continues at Tamesis on 21st May with a Silver tiller there on 22nd. Another fantastic Thames venue to be enjoyed by merlins of all ages.

Ranelagh is a wonderful club under constant threat from the continuing development of Fulham Football Club. Please visit FFC Pier - Ranelagh SC and Petition - Save Our Sports on the River to help us fight the fight to save recreational sports on the River Thames.

Our next Ranelagh Merlin open is on October 23rd where we'll do battle on the Putney- Hammersmith stretch of the Thames in glorious winds and sunshine once again.