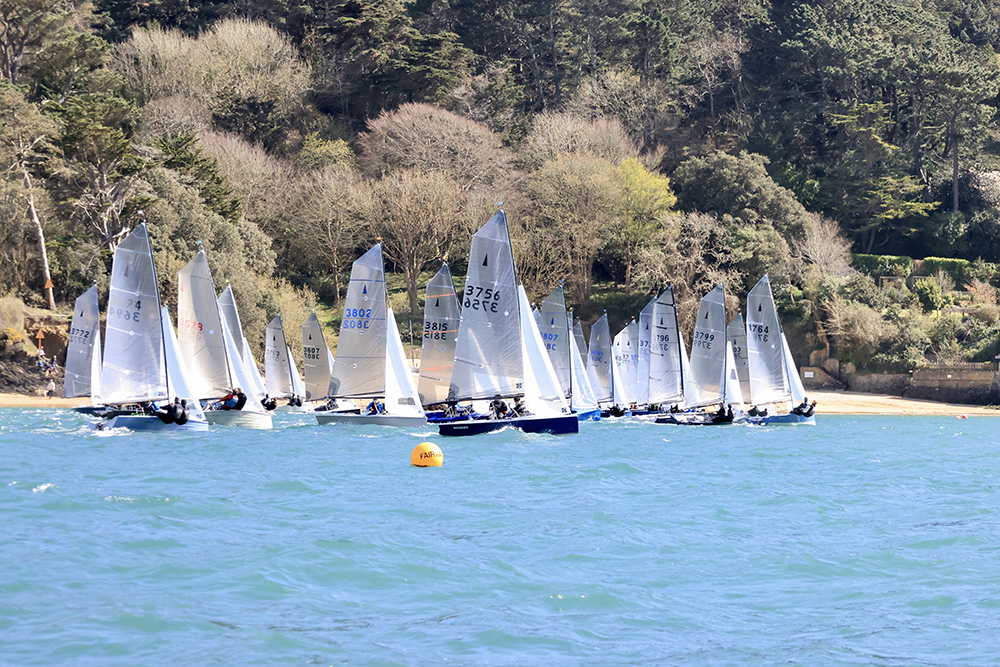 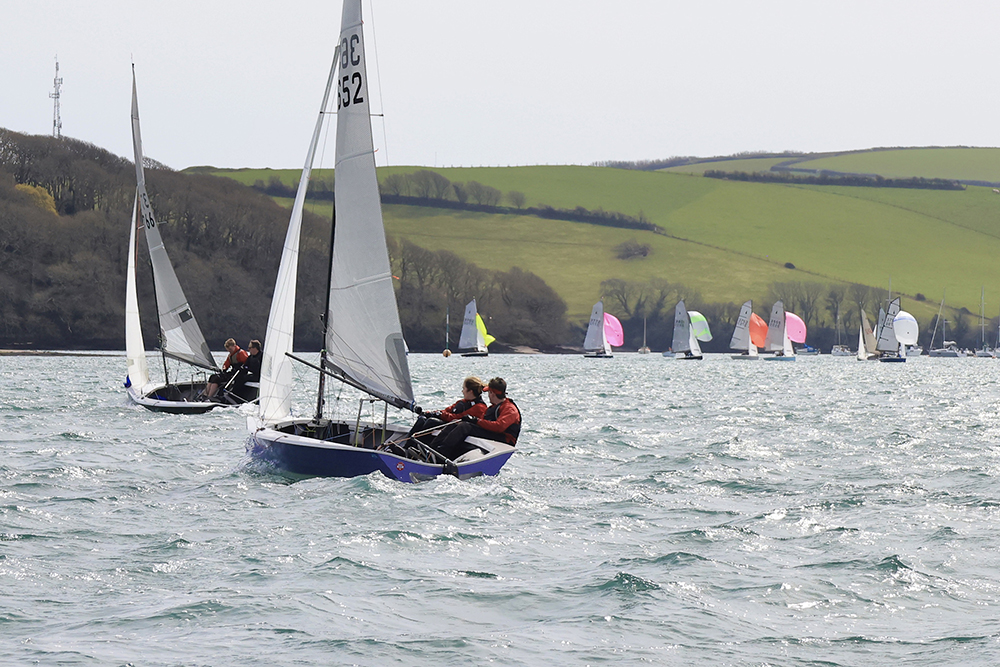 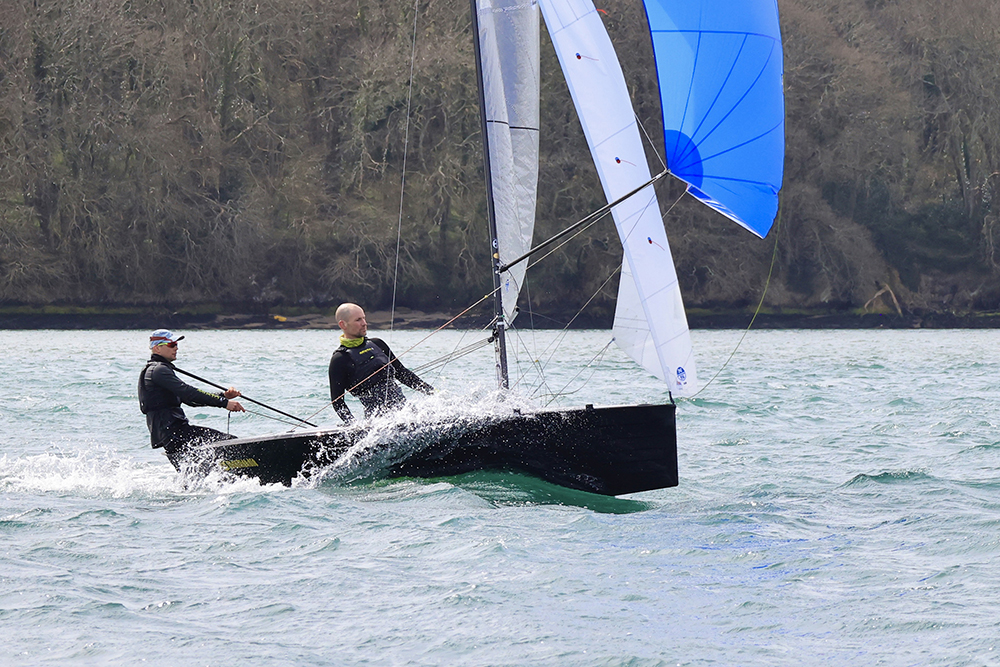 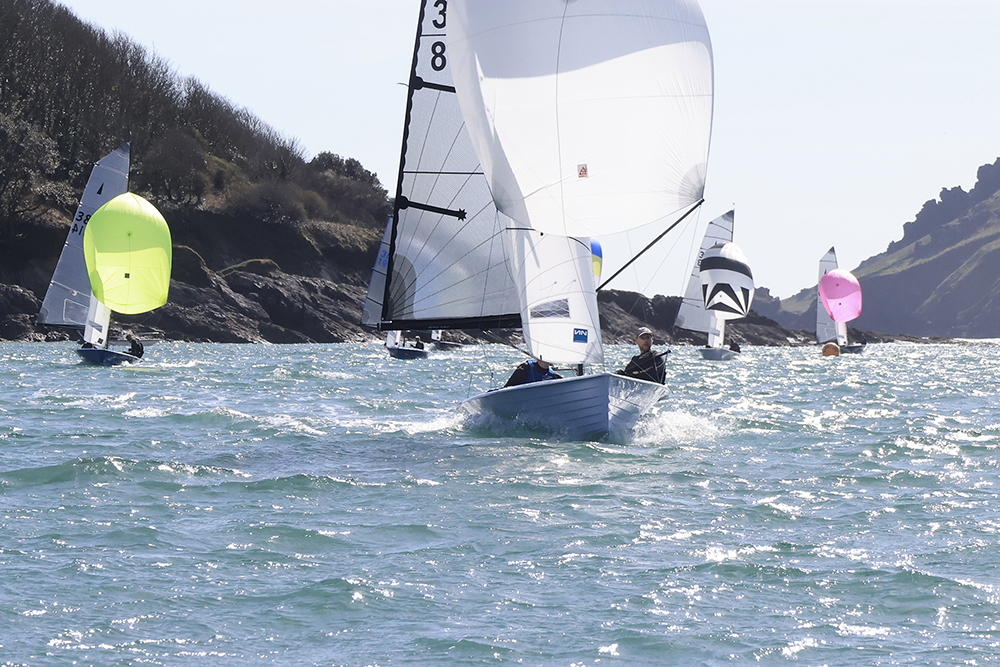 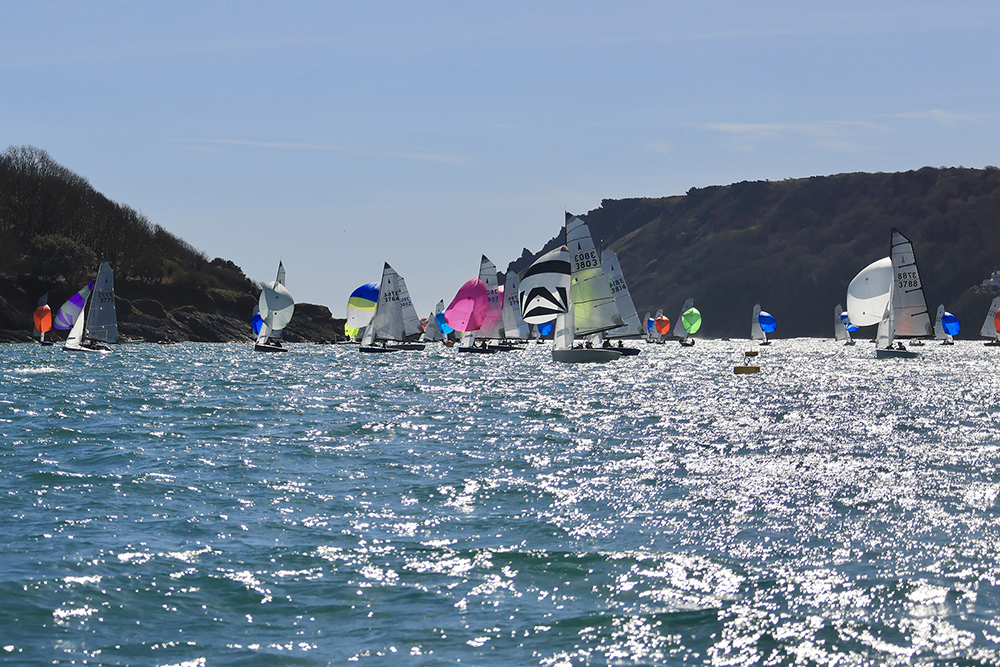 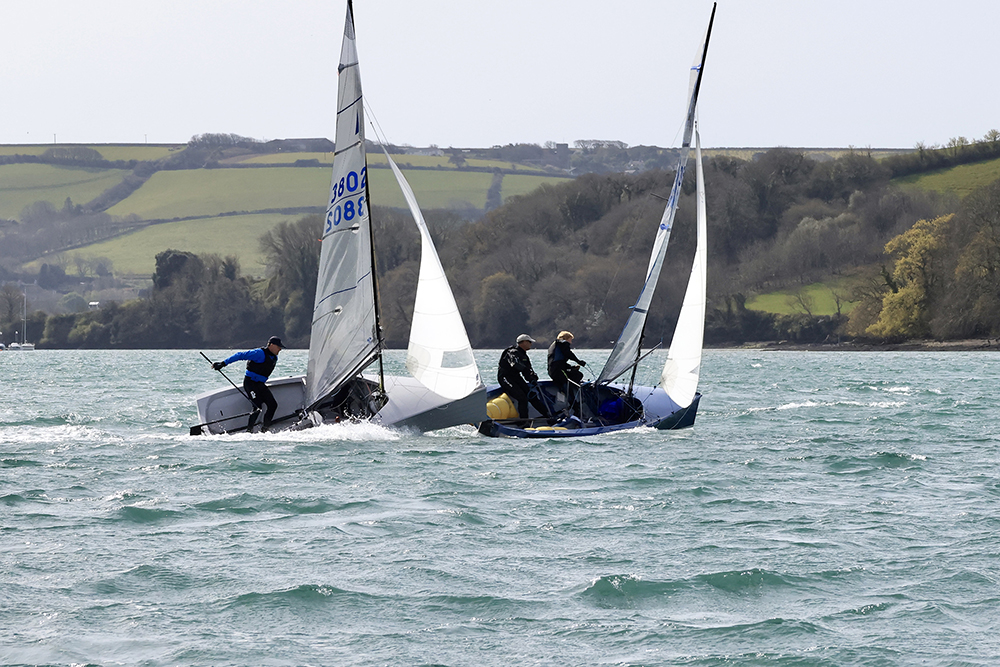 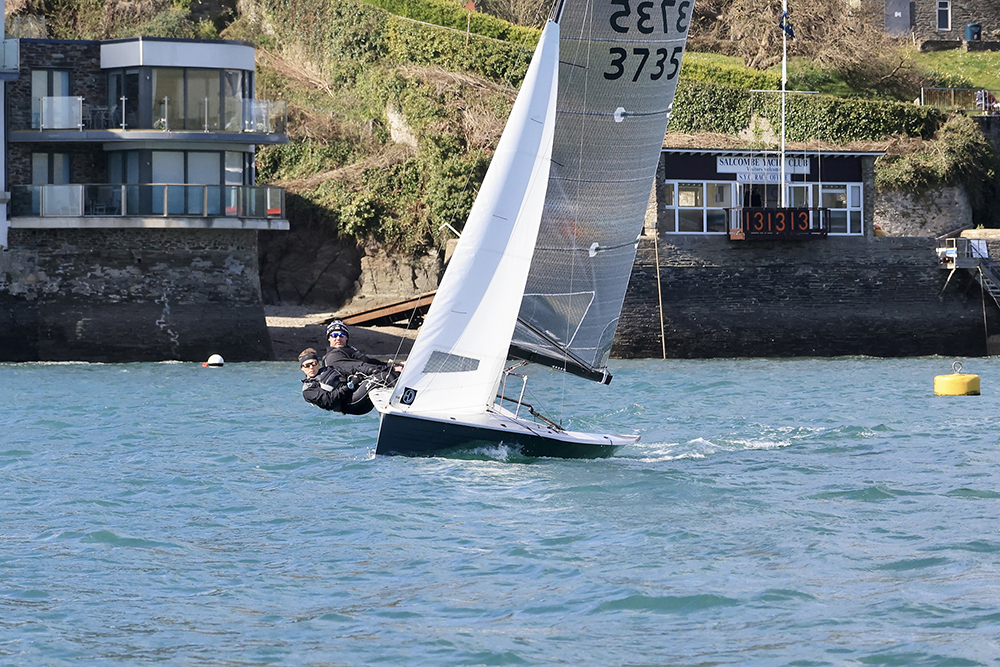 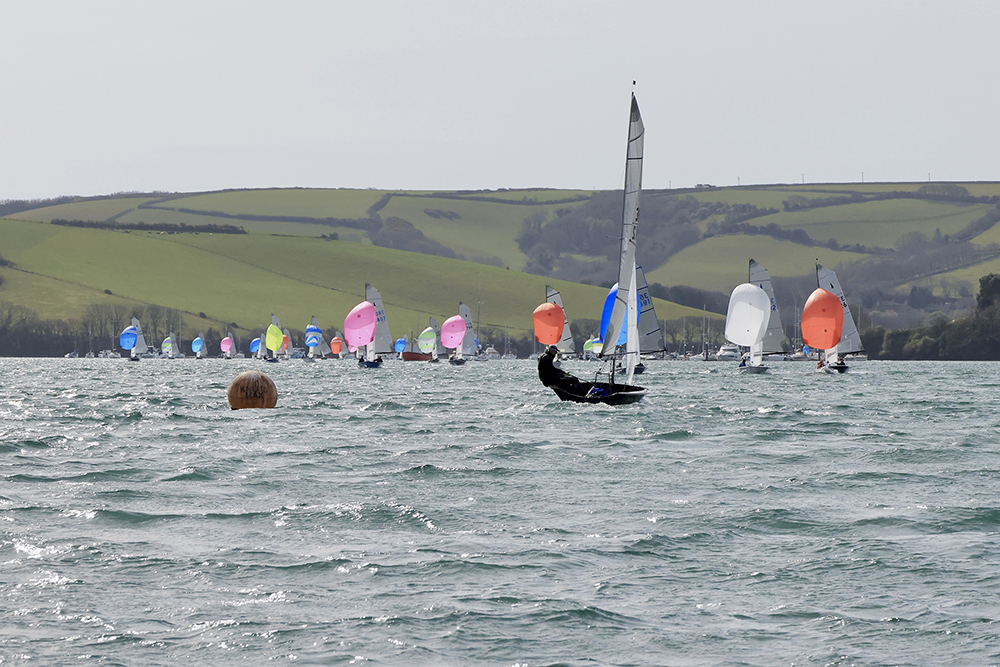 The weekend of the 9th and 10th April welcomed 41 keen Merlin Rocket sailors to a very sunny Salcombe Estuary for round 5 of the Craftinsure Silver Tiller 2022.

Throughout the week previous, the forecast had been getting better and better for the weekend, we were not disappointed when we arrived on the Saturday morning.  Everyone was pleased to see some real champagne sailing conditions and launched into a sunny, 10-15 knots blowing straight down from Blackstone.  Due to the sunny forecast, the Harbour Authority were keen to keep the fairway open to allow marine traffic to flow, which made the start line quite tight, and focused the minds - many of which had gone a bit rusty (mine very much included) over the winter.

Race 1 had the obligatory two general recalls, and a few boats and some big names were a bit too excited, falling foul to the black flag.  Arthur Henderson and Livvy Bell (borrowing Papa John Bell’s boat) made an absolutely storming start and whizzed off into the distance, managing to keep some seriously quick people very much behind them.  Hot on their heels were James Wells and Anna Aylward who sailed beautifully and stood their ground, coming home in 2nd and proving that time together in the boat and time on the water really is paying off.  Chris Gould and Rob Allen came in third.

The second race of the day was equally lovely conditions, but with slightly less water so a nice simple 131313 was sailed in fantastic conditions.  With some more boats back on the race track with fresh legs and fuelled by ice cream after their BFD in the first race, the start line was busier, narrower and windier.  Christian Birrell and Sam Breary sailed a very clean race to come home in first, battling it out behind were Simon Potts and Holly McArthur in 2nd and Andy Davis and Pippa Kilsby in 3rd.

Salcombe Yacht Club put on a great evening on the Saturday, with drinks on the terrace.  The Yacht Club has arguably the best beer and the best view in Salcombe, so it’s important that we support these guys.  This was followed by a great food and plenty more beer and Salcombe Gin for those who wanted it. It was great to see lots of people get together, after what has been a tricky few years.

Sunday morning was lovely and bright but very chilly, and ice has formed on the boat covers.  It was a little windier than Saturday, and a strong, cold Easterly wind was blowing straight into Batson which made people a little nervous and encouraged a few people to climb into many layers of thermals and very thick wetsuits which they may live to regret after the 86th gybe on the first run.

An Easterly wind in Salcombe estuary is a rather challenging affair and tends to roll down the East Portlemouth side and blob itself wherever it pleases.  Now, I haven’t been in a boat since November, so I’m possibly not the best person to ask specific details about what happened as I seemed to spend most of Sunday leaping about and getting annoyed with spinnaker poles.  Anyway, everyone seemed to have a nice time and most people seemed to get their fair share of some nice big gusts, and some not so nice big holes.  But that’s Salcombe.

Making the most of the conditions (and using some new knowledge after a lengthy bar debrief with legend and multiple Salcombe winner Phil King on Saturday night) in the first race was new pairing Chris Gould & Rob Allen and Caroline Croft & Sam Mottershead who snook out into the front, followed by Christian Birrel and Sam Breary in third.

The final race of the day was a similar affair to race 3, but this time, Henderson family were on charge and really showed us all how to navigate the estuary.  For the second time this weekend Arthur Henderson and Livvy Bell sailed a very calm and impressive race, and stormed into the lead, holding off Will & Rob Henderson in 2nd and Gould/Allen in a very consistent 3rd.

It was great to see lots of new faces and new pairings in the Merlin fleet this weekend.  It was a tricky weekend and those who sailed a consistent series seemed to flourish.  There were some very impressive performances around, and I think this year is going to be really interesting.

A great weekend was had by all, and it was so nice to have some great conditions to yacht around in.  Salcombe Yacht Club were great hosts as always, Salcombe Gin were generous sponsors of the event yet again, along with Craftinsure who are sponsoring our Silver Tiller series again, for which we are very appreciative.

Next up we are off to Mumbles on 23rd/24th April, which was an awesome venue last time.  I hope to see you all there!

Thank you Pippa Kilsby for the report