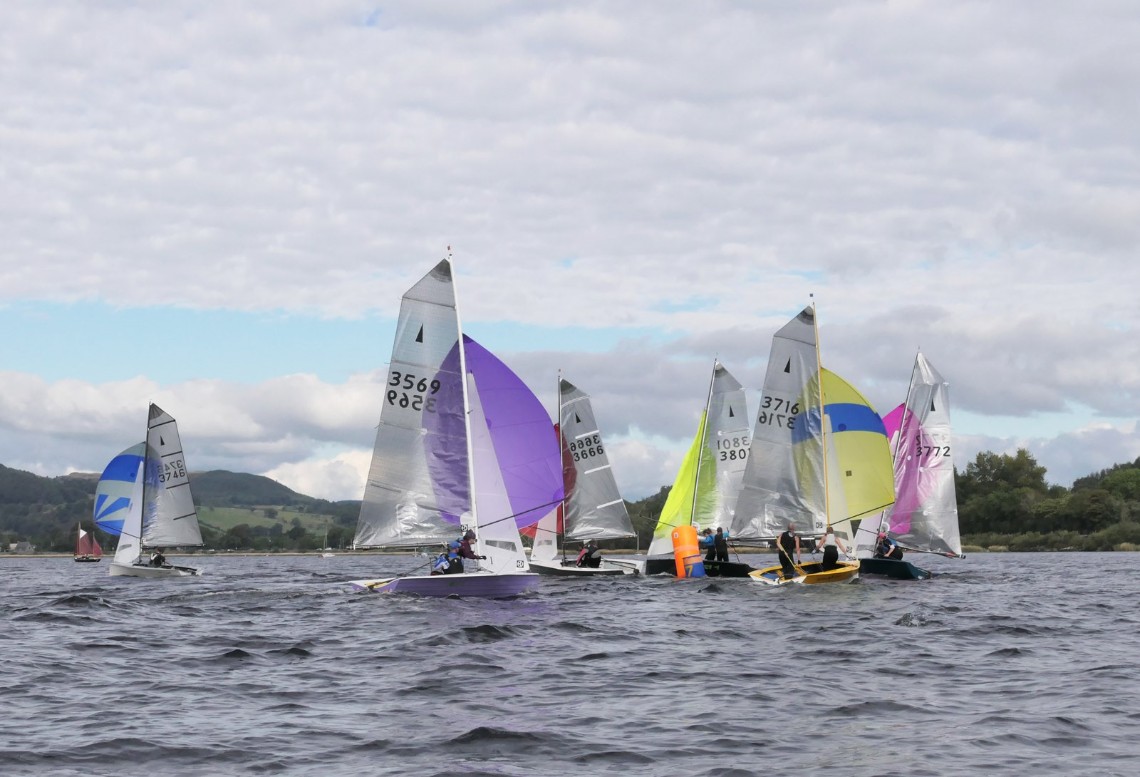 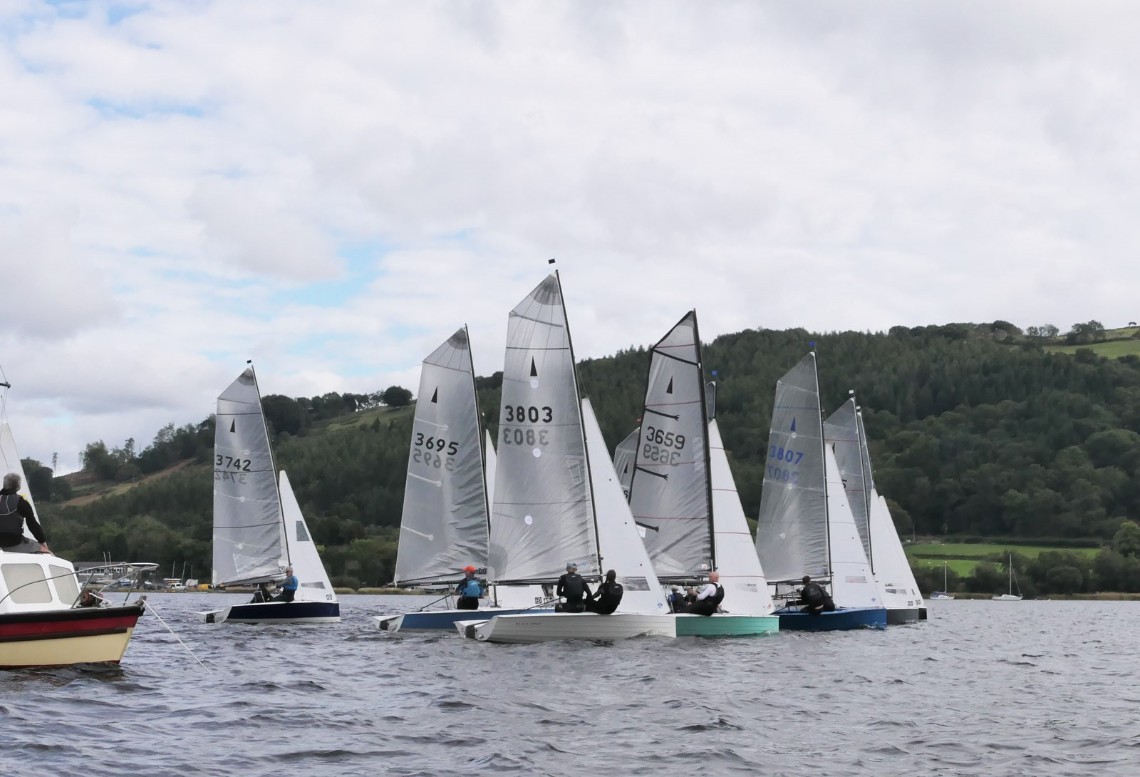 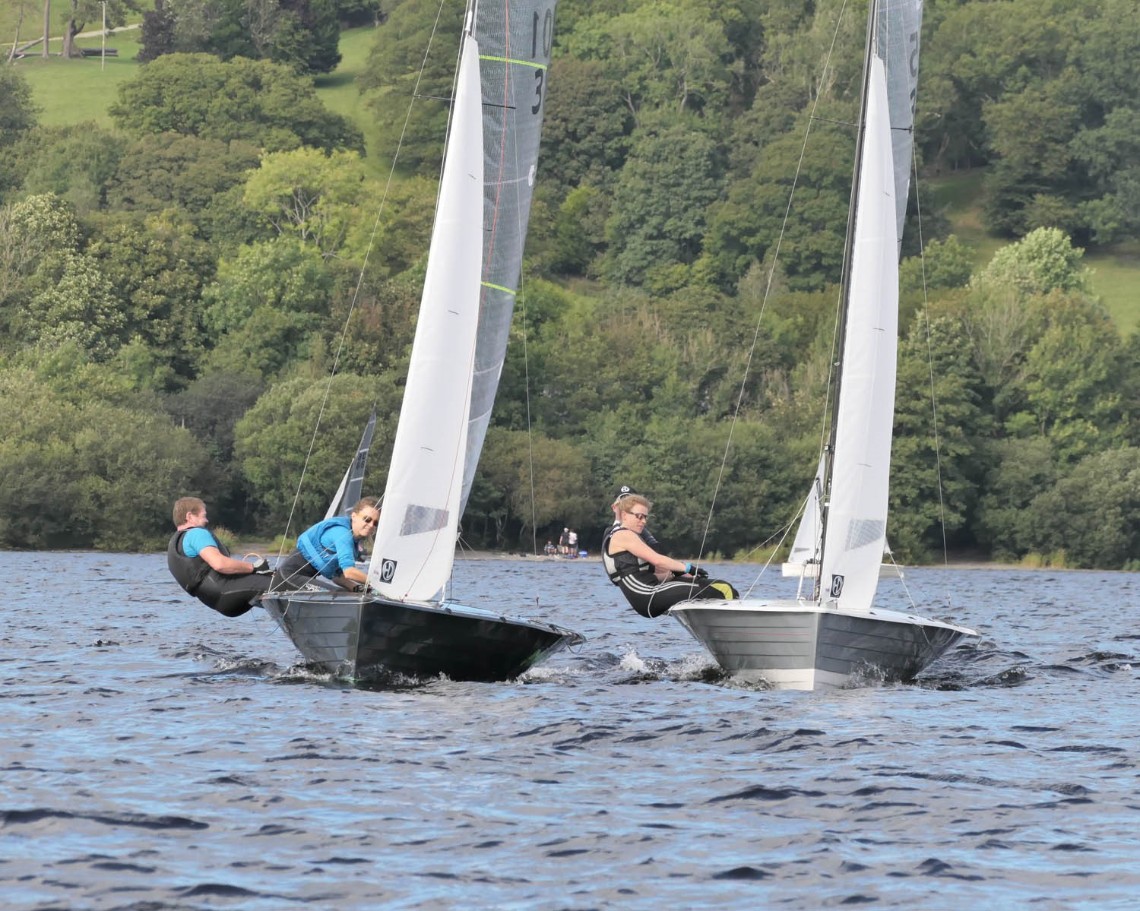 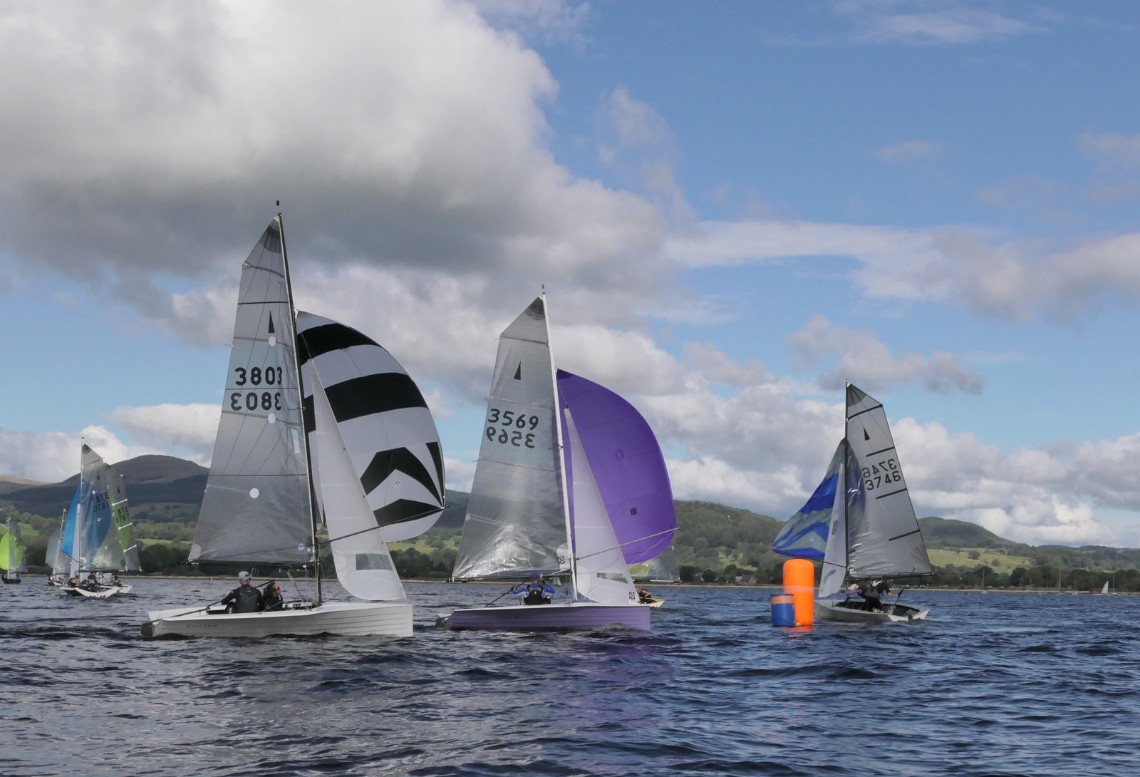 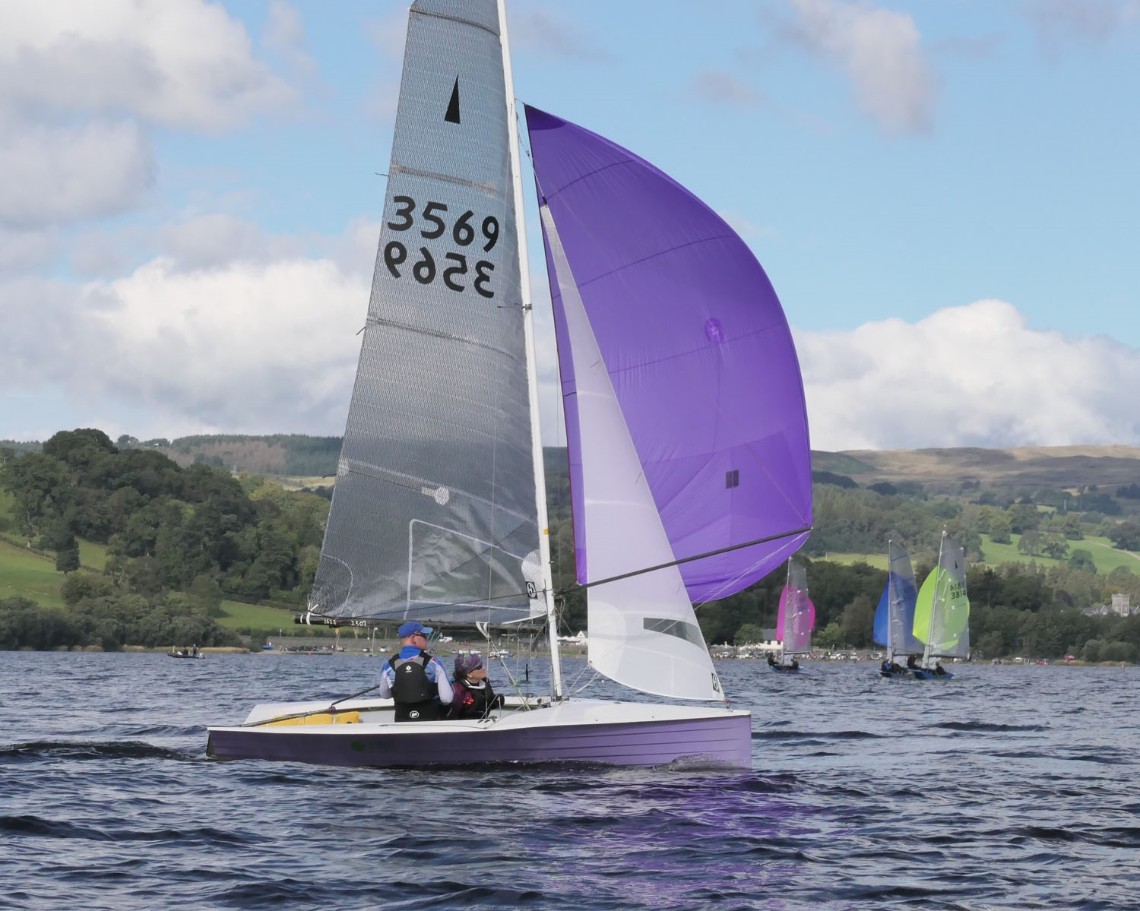 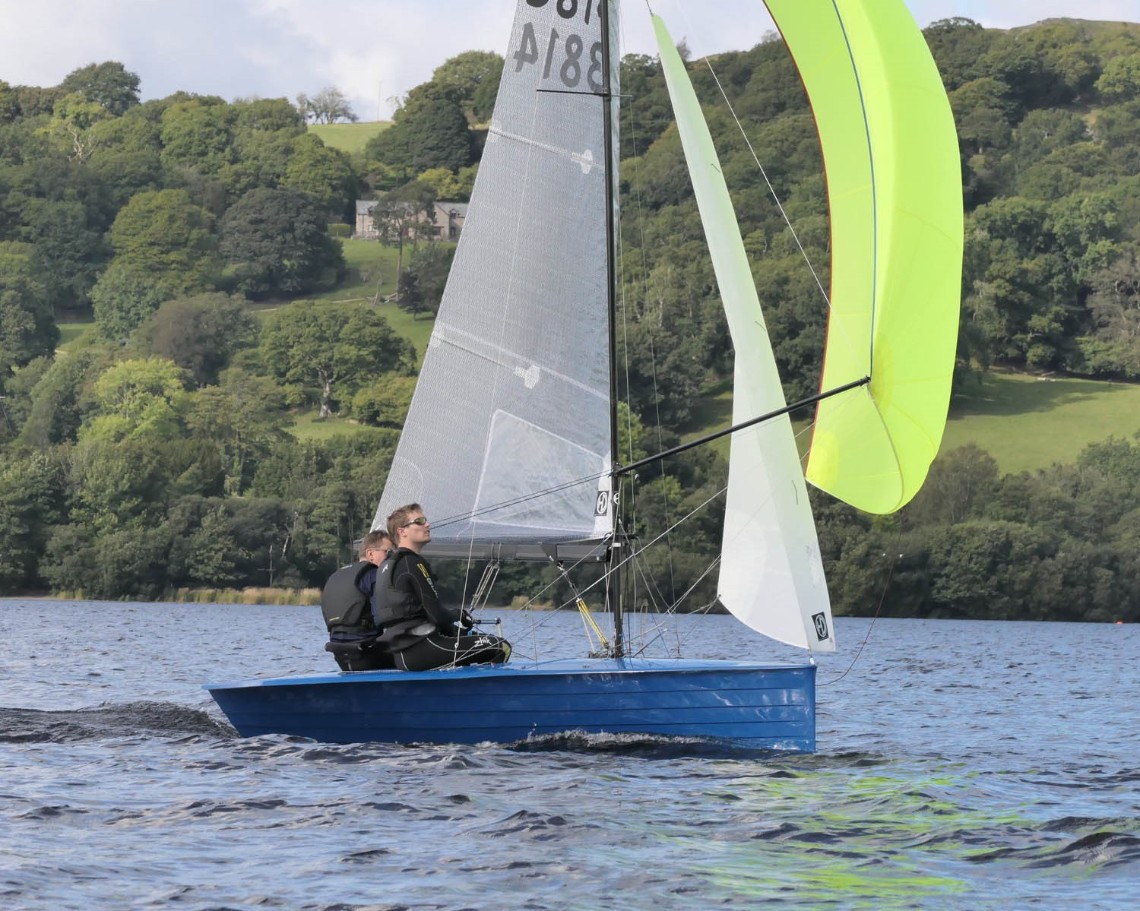 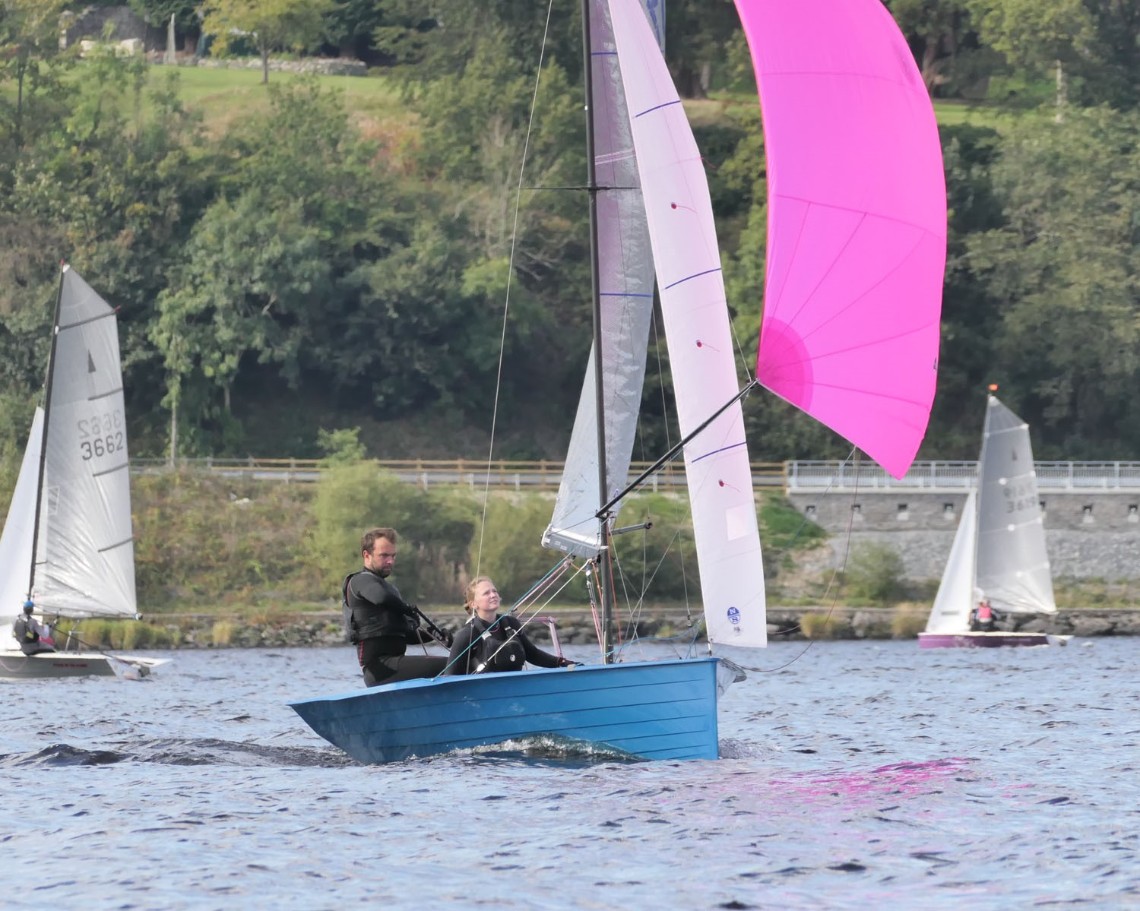 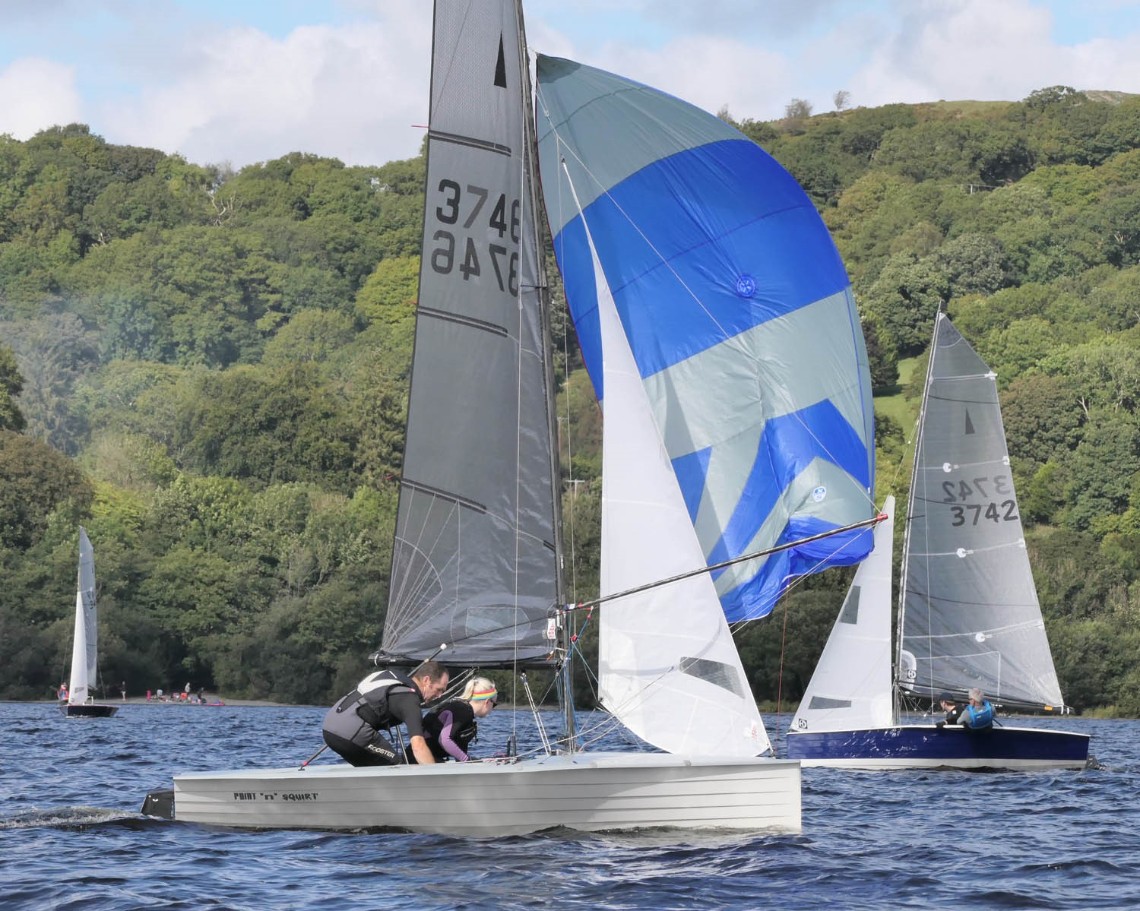 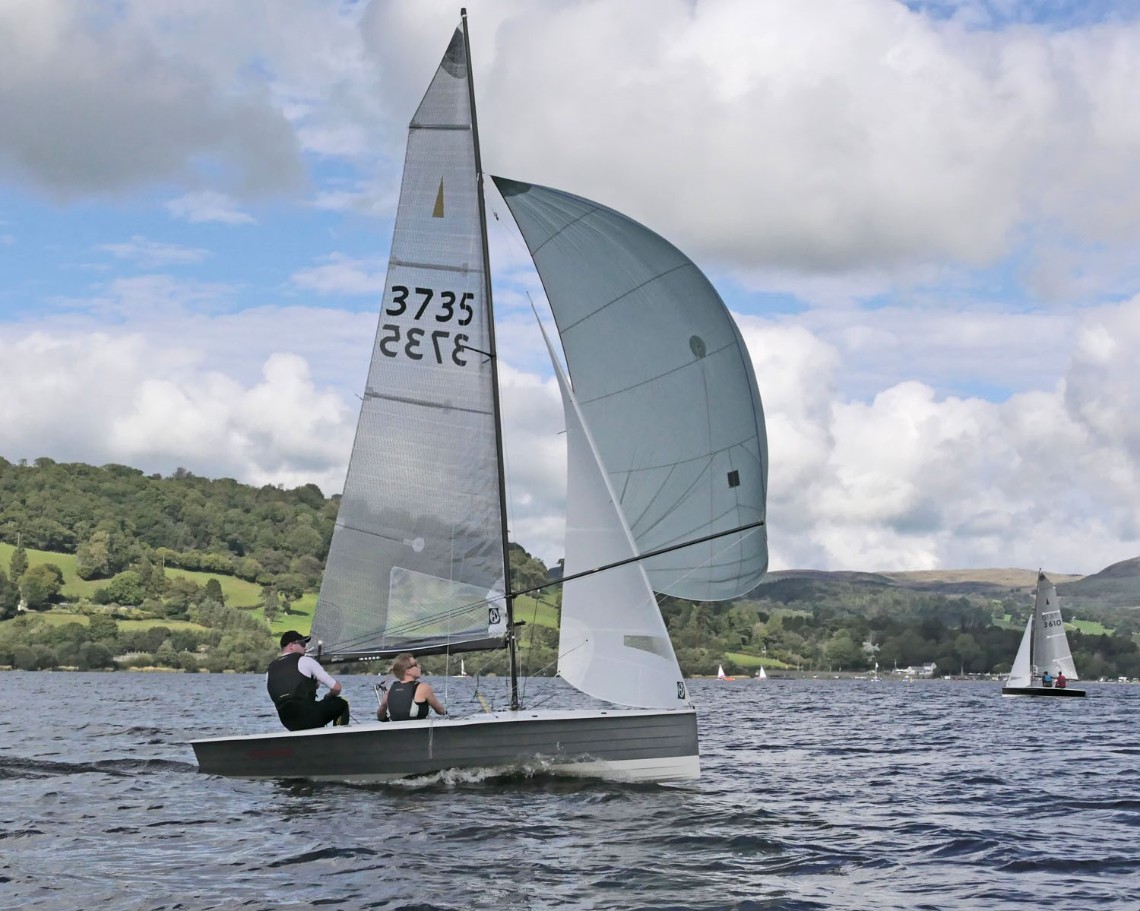 25 Merlin Rockets made the trip over the hills to reach Bala Sailing Club for the Nautilus Yachting Inland Championships on a gloriously mild, and surprisingly dry late September weekend. However, when competitors began arriving on Saturday morning, the wind wasn’t quite playing ball… flat calm!

However, you can always trust the locals, and 5-8 knots filled in down the lake perfectly timed for racing to begin bang on schedule at 1pm. In race 1, a square line had the fleet spread evenly, but those on the middle and right of the first beat came out ahead. Andy Davis & Pippa Kilsby made the most of this to win with a commanding lead. Chris Gould & Caroline Croft came second, closely followed by James Goss & Chris Kilsby third.

Despite no major changes in wind direction, race 2 was tactically very different with the far right paying handsomely on each upwind. Tim Saxton & Mary Henderson made the most of this from start to finish, although were hard pressed by Mike & Jane Calvert as the wind dropped on the 4th and final lap.

Race 3 saw a number of the previously mentioned names work their way to the front again despite many place changes throughout the fleet. Mike & Jane sniggling past Chris & Caroline to take the race win they’d been so close to in the previous race. James & Chris continued their remarkably consistent day with a third, third place finish of the day.

Both the forecast and the local oracles promised slightly more wind for Sunday, and they were right once again. With just two races scheduled and the windier conditions making the boats move significantly faster, a longer course and more laps were called for. PRO Nigel Denchfield duly obliged. Andy & Pippa repeated their actions from the 1st race of Saturday posting another win. James & Chris sailed a great first run to pull up to second where they then stayed for the rest of the race. The battle behind was much tighter, with Chris & Caroline employing expert covering tactics to stay ahead of the group behind.

The fifth and final race was another where the main place changes seemed to be happening on the runs not the beats with big gusts & lulls leading to huge speed differentials. The fleet remained bunched on the first beat, but it mattered little as on the first run Chris Martin & John Tailby, James Wells & Anna Aylward & Tim & Mary held out to the right hand side making big gains, whilst the rest of the fleet gybed off and ran out of wind. Tim & Mary worked their way to the front before extending away. Chris & John battled hard to hold position, however, Andy & Pippa had other ideas overtaking them to secure second place and the event win.

Thanks to Nigel & Fiona Denchfield and all of the Bala Sailing Club volunteers for a very efficiently run & very enjoyable weekend on & off the water and to our sponsors Nautilus Yachting for the lovely glassware. What a great event at the beginning of a busy autumn of Merlin Rocket sailing with Craftinsure Silver Tillers at Hampton, Paignton, Hollingworth, Wembley, Chichester, Blithfield, Brightlingsea, Burghfield & Itchenor.