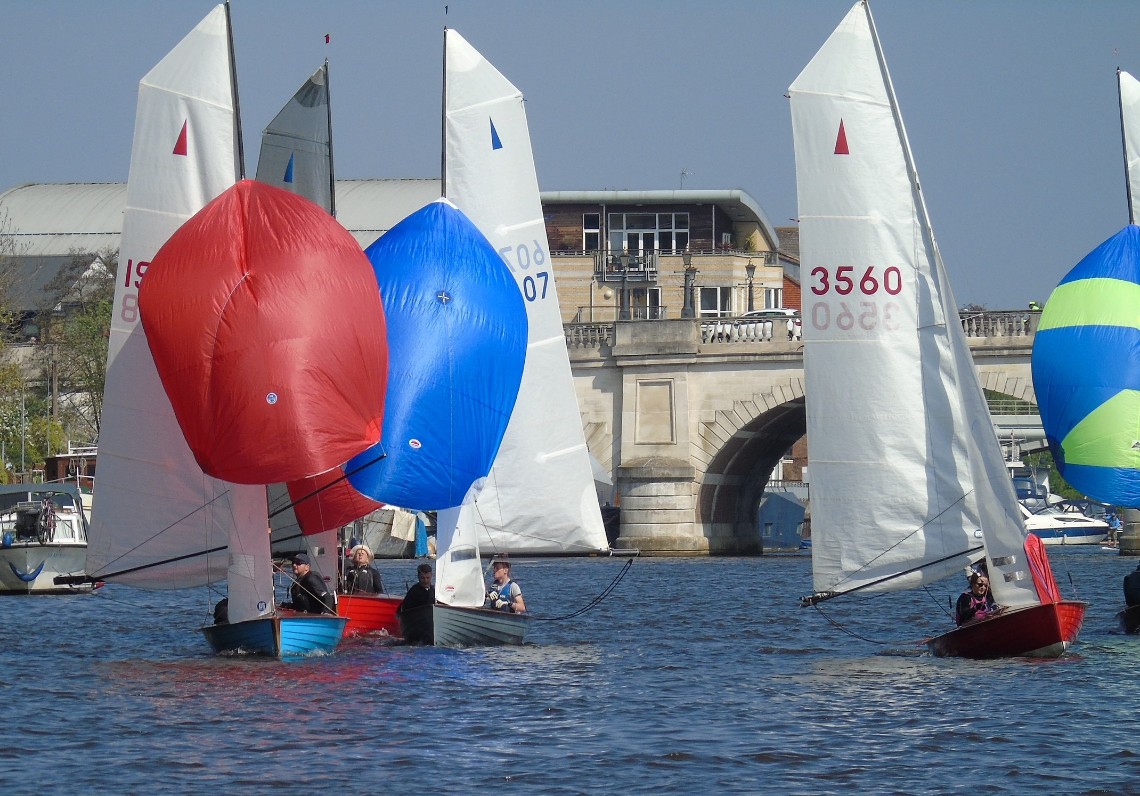 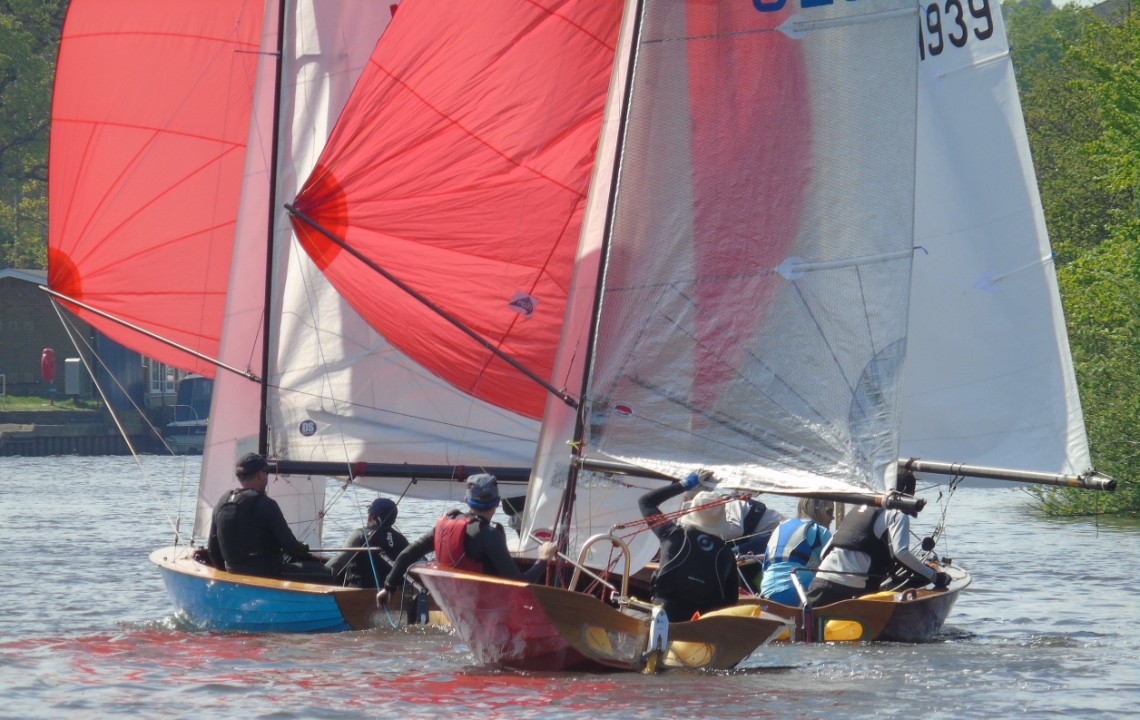 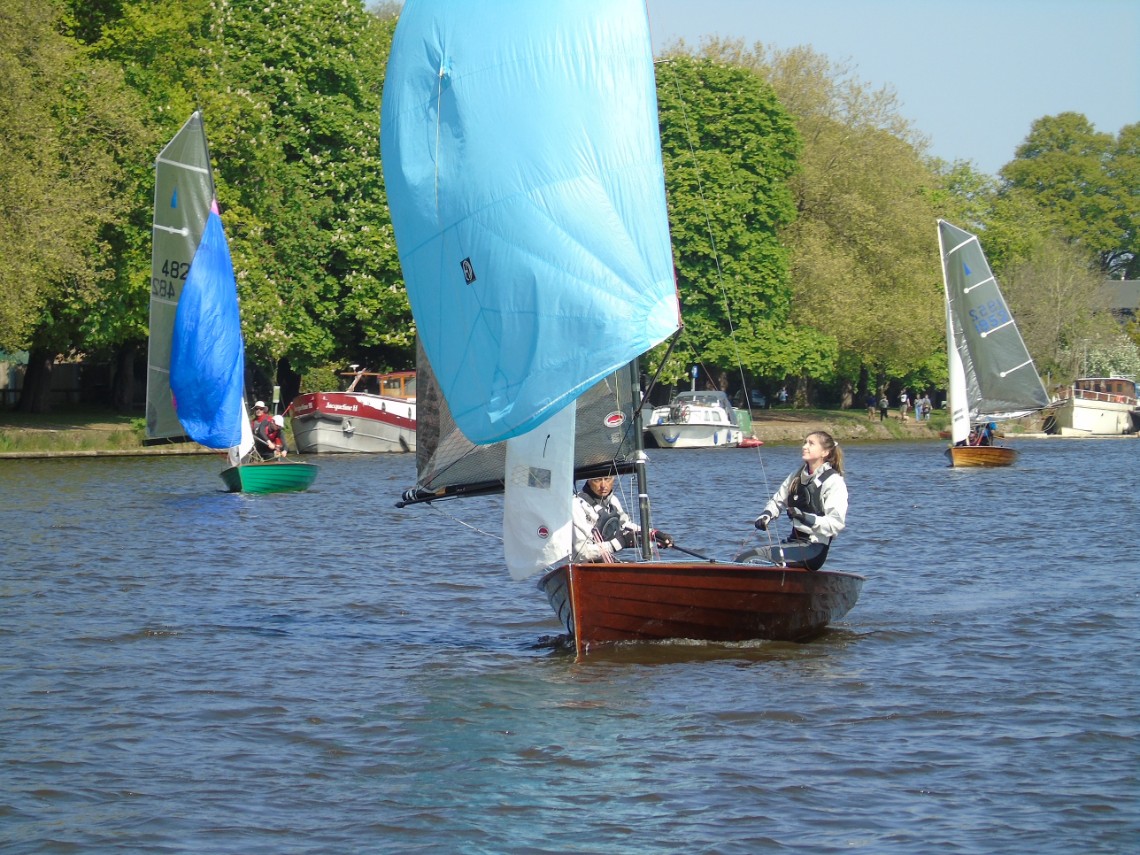 The De May and Thames Series are sponsored by Craftinsure.

One of the great things about sailing vintage Merlins is visiting vintage clubs. Thames, founded in 1870 is the oldest on the river and its dark timbered clubhouse is brimming with mementos from that long history, including a wall of photos and letters from their patron, the Duke of Edinburgh, who it seems was quite keen on the Raters and their development.

And so, the vintage Merlin fleet, minus a considerable portion who decided they had better attend a club wedding, lined up for what they had thought would be a gentle F2-3 but turned out to be much stronger at times, and would be a real test of crews and designs of boat.

With a brace of Jack Holt boats from the late 1950s, (607 Crescendo sailed by Andy Harris and Matty Key, 1097 Flinkidink, Stuart Jenkins and Nicola Scaddan), a 1967 Ian Proctor boat (2037 Lady Hyperion, Richard Burton and Miles Phillips) and a Morrison from the early 70s sailed by Chris Gilbert (Commodore) and his son Toby, the fleet set off down river upwind to the first mark, with a worryingly tight bear-away to avoid the rusty iron pilings of the Ait.

We, in our recently recommissioned Proctor, were characteristically last to round, so our tactics for the run turned to covering and riding the wakes of the other boats, and it was then that we realised we were actually planing much more quickly than the others and to my mind, blasting to an unassailable 200-yard lead ...  However, just as I was briefing the crew on the advisability of a good, safe, early dowse of the kite for the leeward mark, an unexplained death roll started, resulting in us ramming the timber Armco barrier they have down there on the Thames, and with such force that the river is probably a 6” wider at that point!

So there we were again, in last place with a boat half full of water and watching the others smugly sailing into the distance. Race one ended in capsize for Andy and Matty as they caught a terrible gust while gybing the spinnaker, and without transom flaps and self-bailers!  Chris Gilbert also fell prey to the conditions, making it a win for the confidently-sailed Flinkidink, followed after a while by the slightly wobbly Lady Hyperion.

Things got trickier as the wind increased for races 2 and 3.  Considerable seamanship was required simply to survive the conditions; Stuart Jenkins was seen flat-out planing in Flinkidink, his spinnaker lowered quickly as soon as it was possible, a credit to Stuart for staying upright, rig intact.

Andy, Matty, and Crescendo survived to record two first places which were enough to win the event.  A great day of tactical, close racing with the Holt boats skillfully working the banks, while we Proctor sailing open-water enthusiasts, preferring the middle of the river with all its paddle steamers, pedalos and that other stuff, they say, floats down it!

Our heartfelt thanks go to the hard-working members of Thames for organising the racing, food, beer, rescues and tows, and also for getting their priorities right in not being tempted by the wedding!

Merlin Rocket vintage and classic racing is lots of fun and you don’t need that much skill or money to do it – often the boats are ‘free to good home’ – then you have the opportunity to sail in our impressive De May and Classic fixtures list which encompasses the fantastic old river clubs, the Broads and even the wide open of expanse of Draycote Water in July this year!

As the double-header, Merlin Rocket open meeting weekend at Thames SC and Minima YC approached, a plan was hatched to compete in both events that involved significant logistics and the generous assistance of multiple members from Tamesis, Thames SC, and, Minima YC.  On the morning of Saturday 23rd April; Andy Harris and Matty Key assembled on the Tamesis hard and assisted by Jonathan Key ventured upriver to take part in phase 1 of the weekend, the Thames SC Merlin Rocket Open Meeting.  The forecast was brisk and heading upriver it soon became clear that the apparent benign wind at Tammy was getting stronger at Kingston and by Thames SC it was very windy indeed!  After cake and prizes, phase 3 of the plan was executed with Thames SC, who were great hosts, kindly towing the crew of Crescendo to Minima YC for an overnight berth ready for day 2.

Sunday morning events started back at Tammy with Andy and Matty joined for the Minima phase by; Joe McLaughlin and Sean Roberts, Peter Impey and Vanessa, Charlie Morgan, and Tim Ginn.  Three more boats, trolleys, masts, and, crews were ferried upriver by Tim Medcalf in time for the first start.  Not so windy as Saturday but with a good NE breeze, the event was won by Rob Cage of TSC.    In the final step of the weekend, all four boats, trolleys, and masts were picked up by Jonathan Key and towed back to Tamesis line astern.   A great weekend of sailing a big thanks to the host clubs and everyone that contributed to help make the logistics work.