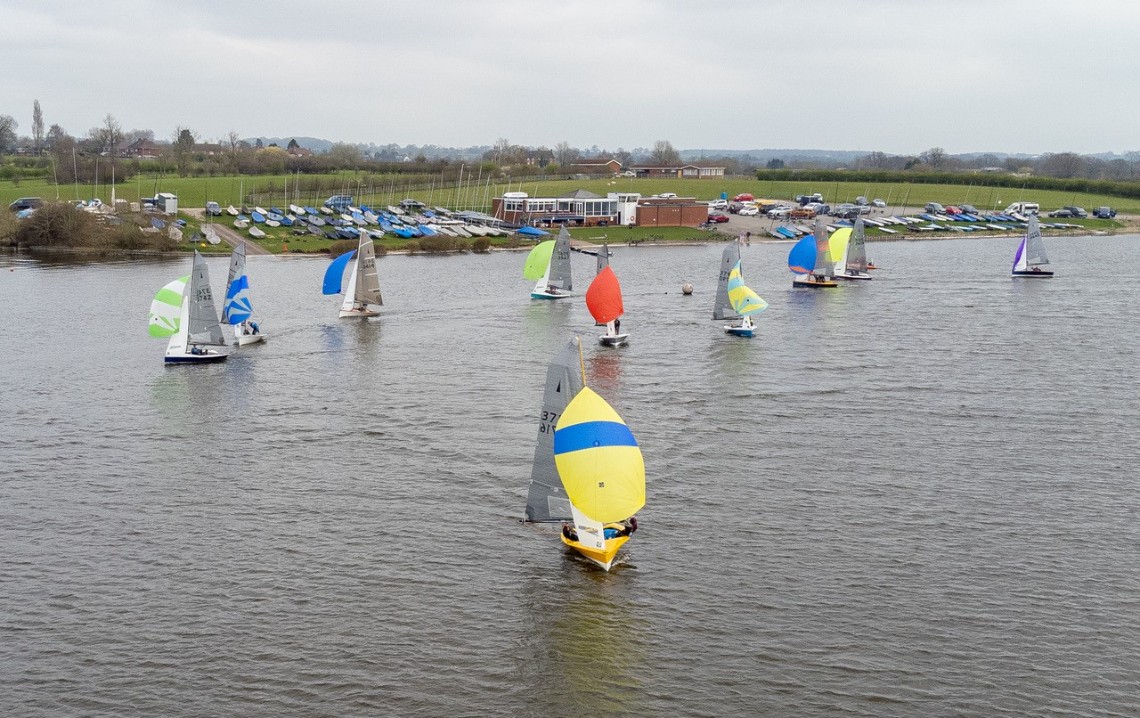 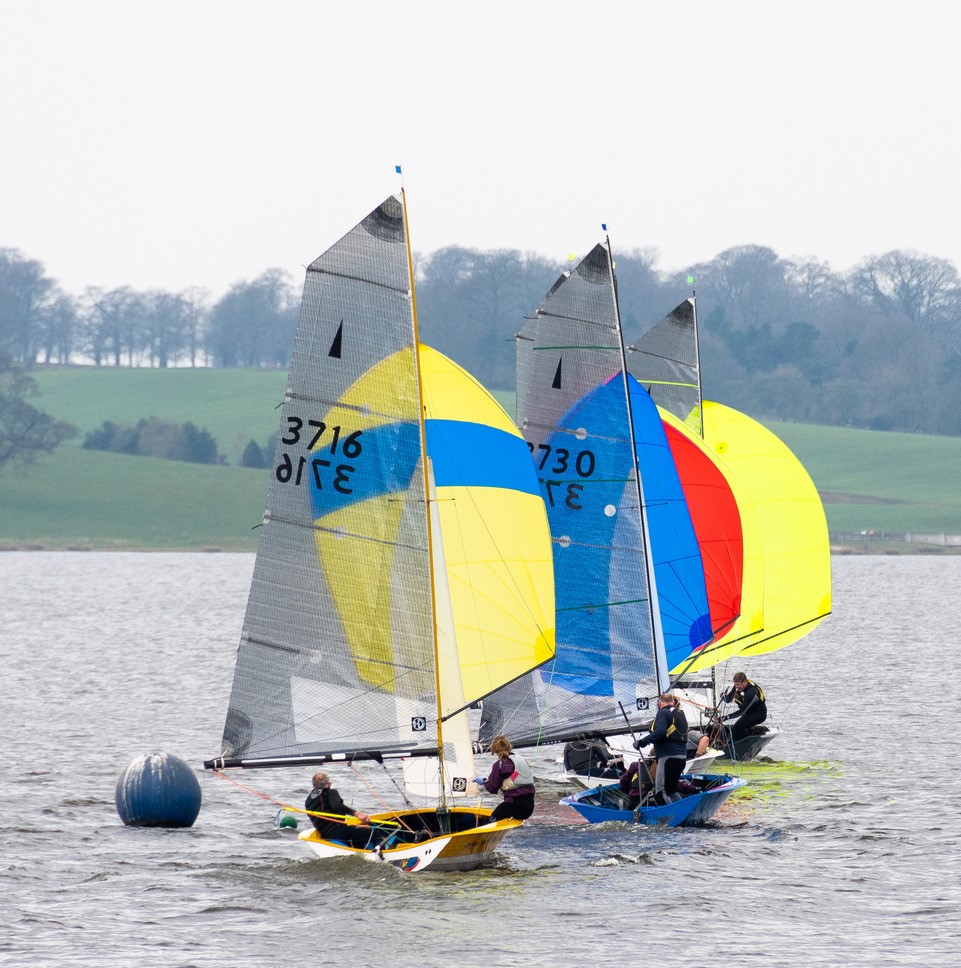 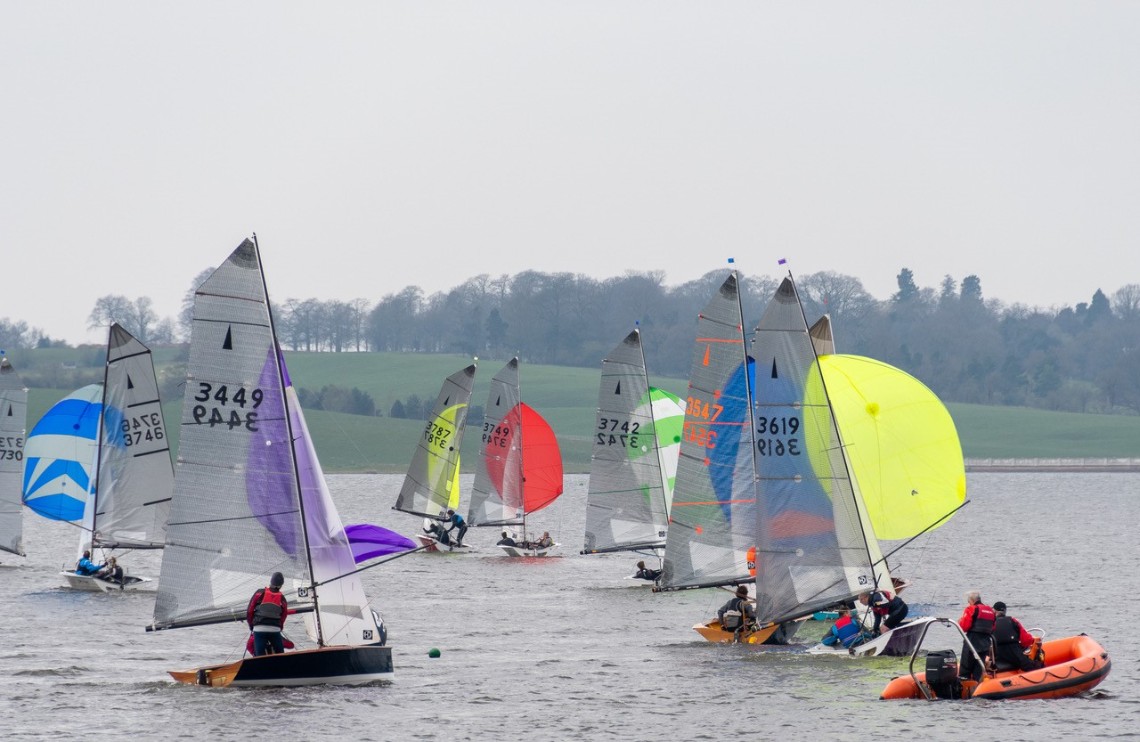 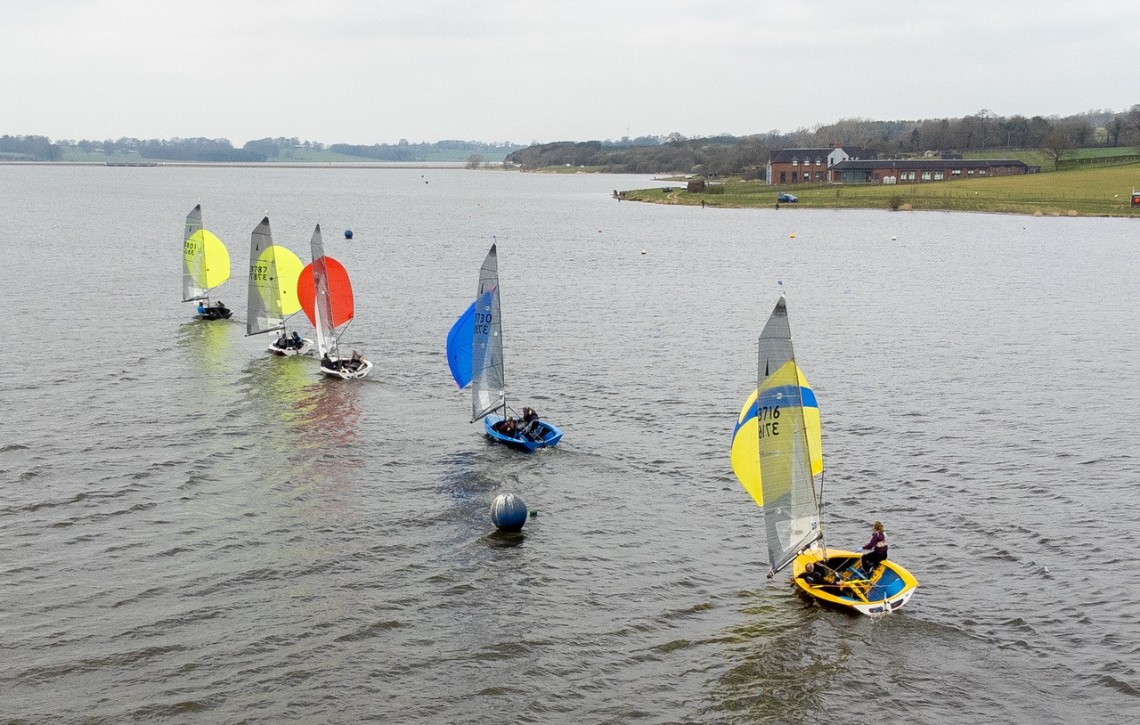 14 Merlin rockets gathered at Blithfield SC for round three of the Craftinsure Silver Tiller series. Also, the first O category event, this bought travellers from the south west and London as well as most of the usual local suspects. The mid week forecast proved wrong with a pleasant force 2-3 settling down blowing over the clubhouse - tricky direction but could it have been far worse!

Race one got underway cleanly, the favoured path seemed to be to tuck under the clubhouse and cross your fingers that the wind finned in off the bank. This was exploited to the full by Paul Hollis and Paula Mason who led at the windward mark with Matt Biggs and Beka Jones in hot pursuit. The run proved just as tricky as the beat and Paul and Paula were overhauled by Matt and Beka and also Chris Martin and Samuel Bailey. Matt and Beka broke clear, but Chris and Samuel had to battle and were soon joined by Steve and Gill Leney who had recovered from what is best described as a hospital start. The battle for second wasn’t decided until the final mark as the three boats in the mix scattered on the final run. Steve and Gill went hard left which looked promising, Chris and Samuel went hard right also into pressure while Paul and Paula - who had rounded second too their direct approach, straight up the middle presumably with all fingers and toes firmly crossed. Steve and Gill’s wind lane faltered right at the end, but a decent lane on the right proved fruitful for Chris and Samuel who managed to cross in front of Paul and Paula with inches to spare. Matt and Beka won, Chris and Samuel second, Paul and Paula third with Steve and Gill discussing start tactics all the way back ashore and passing both of the boats they had been fighting with all race.

Race 2 got underway after lunch, same breeze, same course, but more snakes and ladders. Tucking under the clubhouse shore was again the place to try to be, the consequence of this was coming in on the port layline and with more boats trying it this led to some interesting roundings but no collisions and less outrage than might have been. Matt and Beka led at the windward mark and stayed there, but again the battle for second was hard fought. Steve and Gill, Paul and Paula and Chris and Samuel were joined by James Wells and Anna Aylward and Colin and Sean Anderson in a five-way fight for a lap and a bit. Steve and Gill held on to second with Colin and Sean coming in third. The long beats in this race were even more enigmatic than the first with boats on opposite sides of the lake looking for an edge which would often reverse itself. An exceptionally tricky race!

Race 3 was held back-to-back. A tweak to the course made the second beat less extreme and also gave us a reach instead of a second run. A tweak to the start line gave us a little port bias which made the first beat interesting. Again, it paid to go hard left and tack along the clubhouse shore but with the pin favoured there was a chance of crossing the fleet this time. Chris and Samuel tried it, won the pin, but missed the cross by inches having to tack back onto starboard. While not ideal this wasn’t catastrophic but Matt and Beka led at the mark, and again sailed away from the battle for second. Chris and Samuel got round in second with Steve and Gill Leney hot on their heels. Steve and Gill passed Chris and Samuel on the run and James and Anna were also loitering with intent, but the close reach favoured the heavier teams and Chris and Samuel sailed over Steve and Gill and away from James and Anna. Steve and Gill remained a threat to Chris and Samuel but the beats being reset made going out on a limb far less profitable and the middle ground was now playable. Steve and Gill were marshalled carefully by Chris and Samuel for the remainder of the race to remain second and third, with Matt and Beka tantalisingly just out of reach in the lead.

First in Silver fleet were Colin and Sean Anderson.

First in Bronze fleet were Nigel and Freya Hudson.

Next up in the Craftinsure Silver Tiller is a Restricted event at Bartley SC on Sunday 3rd April.

Thank you Chris Martin for the report.