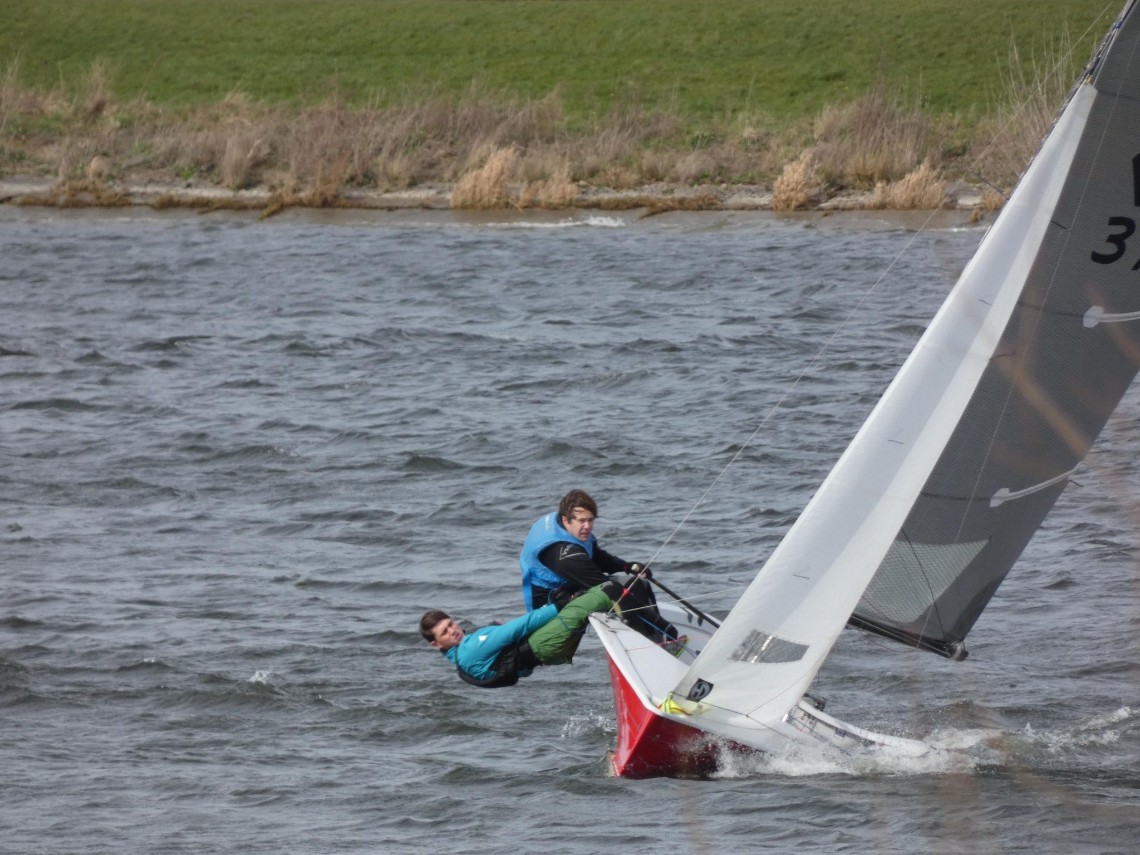 As the fleet arrived at Shustoke Sailing Club for the opening Craftinsure Silver Tiller of 2022 on Sunday 13th March, they were welcomed with bacon sandwiches and homemade cakes, as well as glorious sunshine. The shifty and gusty southerly wind direction made course setting a challenge for race officer Stuart Hydon. The morning was made up of two back-to-back races using all but one mark on the reservoir which made for some fun orienteering (and a lot of hoists and drops!).

18 boats headed out for the first race – and all of them started except for Mark Reddington whose forestay popped out of the mast just before the starting sequence. Tom Gillard and Rachael Gray got off to a flying start and led from start to finish in race 1. There was a good battle between the next three boats in the gusty conditions with some snakes and ladders. Eventually Simon Potts and Holly Scott managed to break through into second with Matt Biggs and James Dawes in third.

The second race was turned around very quickly, with helms & crews just having enough time to strip off a couple of layers – doing over 30 legs in a 50 minute race is extremely hot work!

The wind had got even more gusty for the second race with a number of squalls blowing across the racecourse. This led to a few boats going swimming including Matt & James and Simon & Holly who had been in second and third at the time. Tom and Rachael showed their consistency in the difficult conditions and went on to win the second race with a convincing lead. Chris Martin and John Tailby who must win the award for the most time flying the spinnaker for the day finished in second place. Following their early capsize, Simon and Holly pulled back into third.

After refuelling with jacket potatoes, soup and more cake the fleet headed out for the third and final race of the day. The sun was still shining and the fleet were happy to see a racecourse with a few less marks. Tom & Rachael’s traveller decided to combust during the starting sequence giving the rest of the fleet a chance to get away before they began their chase down. Matt & James got around the first mark with a small lead and continued to extend as the race went on.

Silver fleet winners Paul and Ben Hollis put in a very consistent performance chalking up a 5,4,6, as did the bronze fleet winners Julian and Tim Harms with an 8,7,8. Tom and Rachael were convincing winners in the tricky conditions.

Big thanks goes to Shustoke Sailing Club for putting on such a great event and for the warm friendly welcome the fleet received. The fleet left the event with sore bodies but big smiles.

Next up in the 2022 Craftinsure Silver Tiller is Wembley Sailing Club on Sunday 20th March, pre-entry is now available on their website https://www.wembleysailingclub.co.uk/.

Thank you Holly Scott for the report.