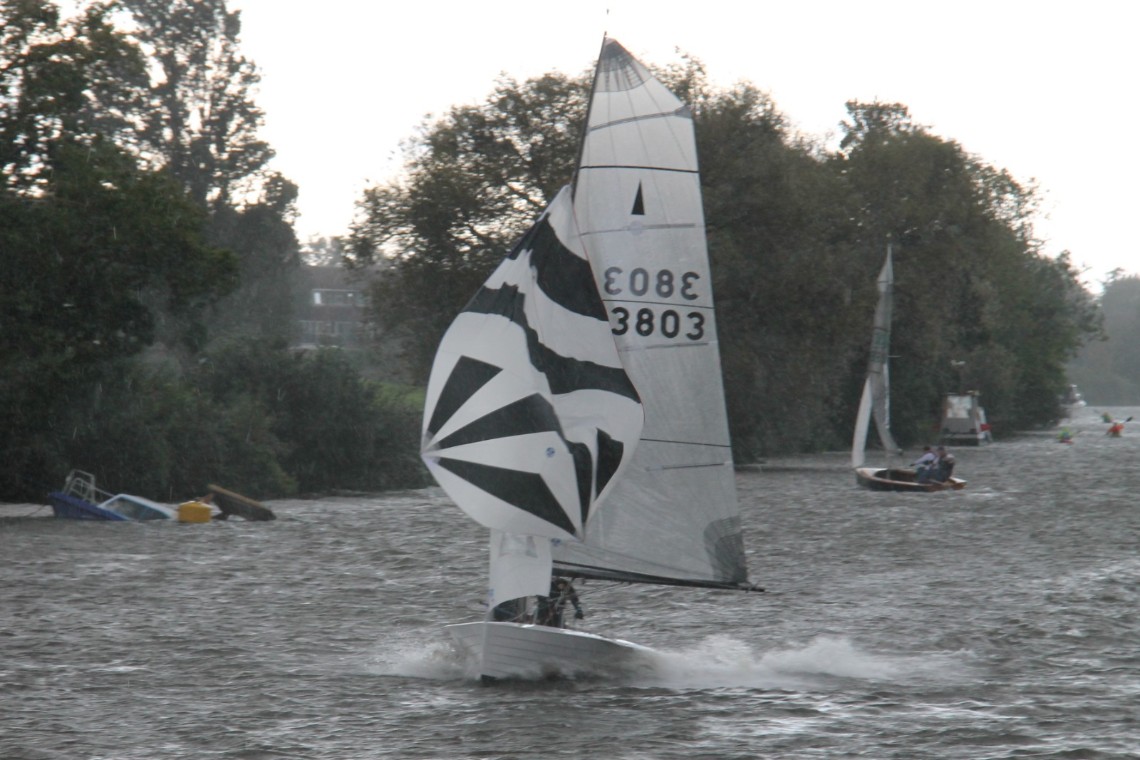 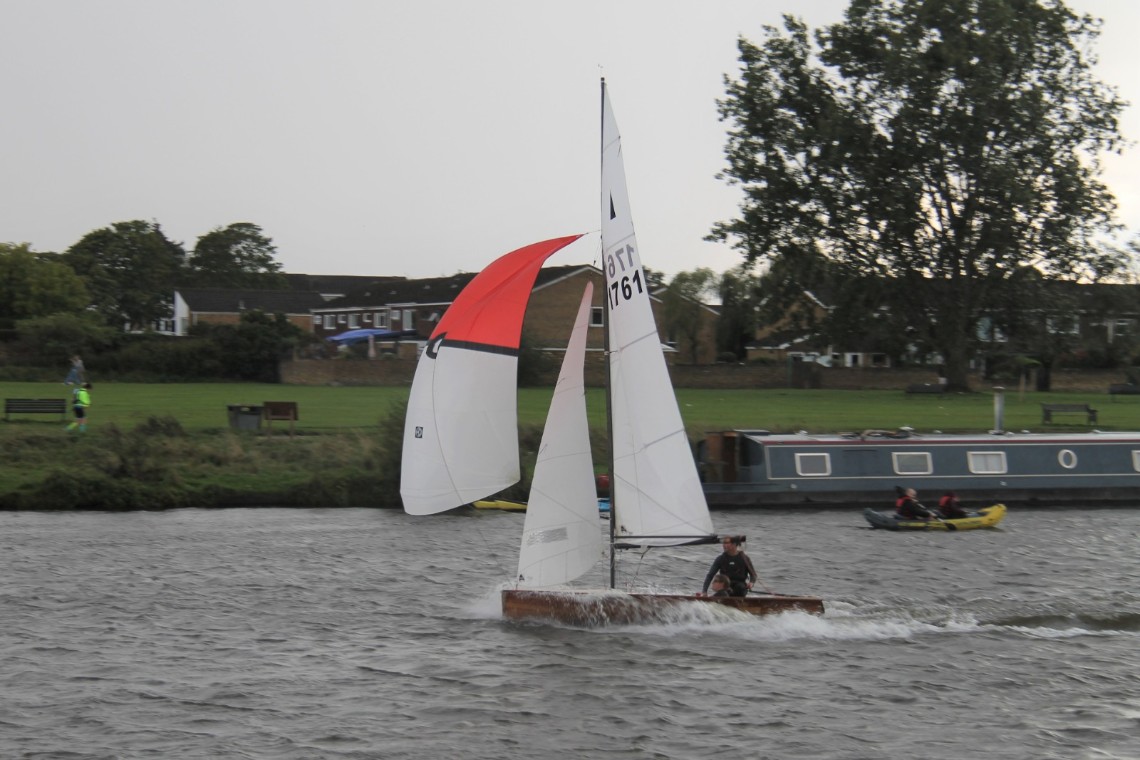 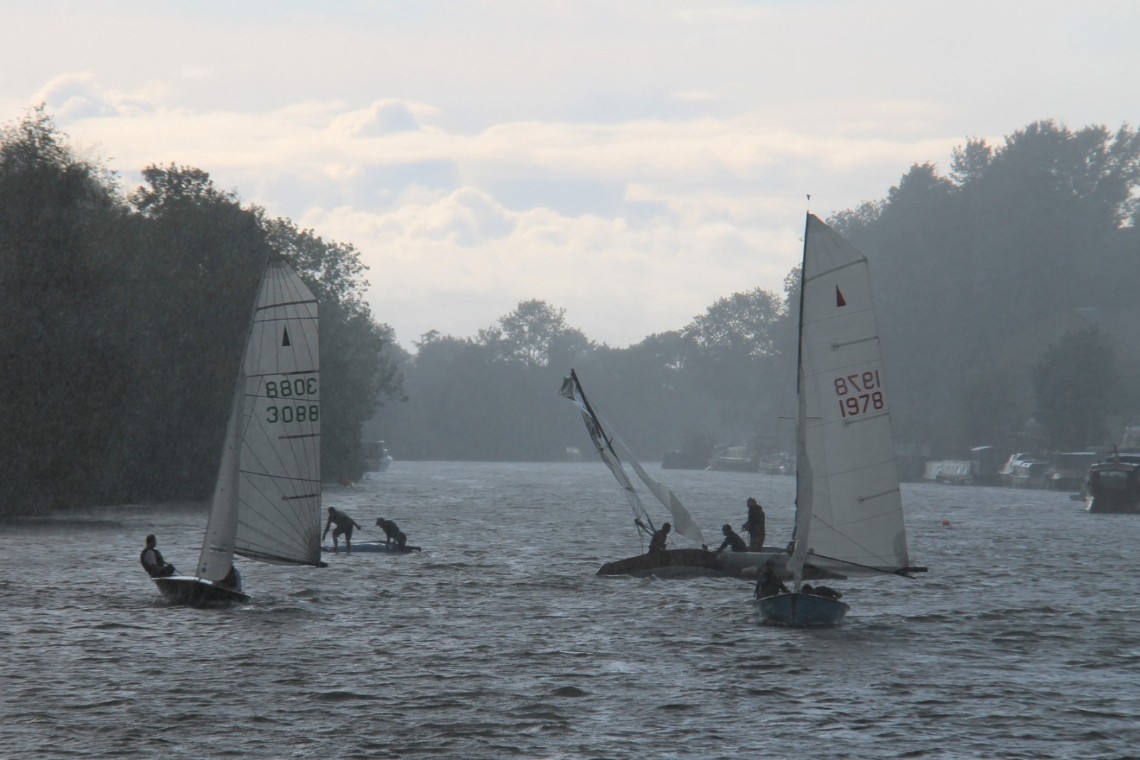 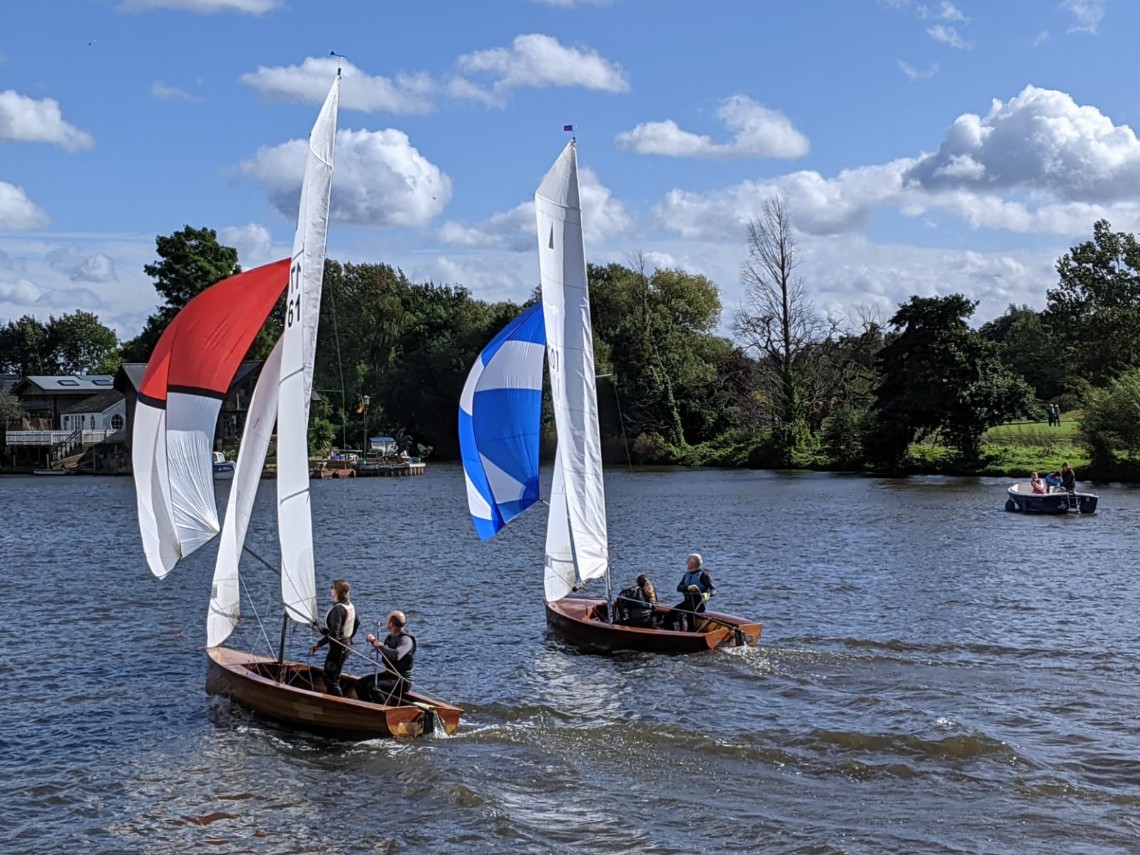 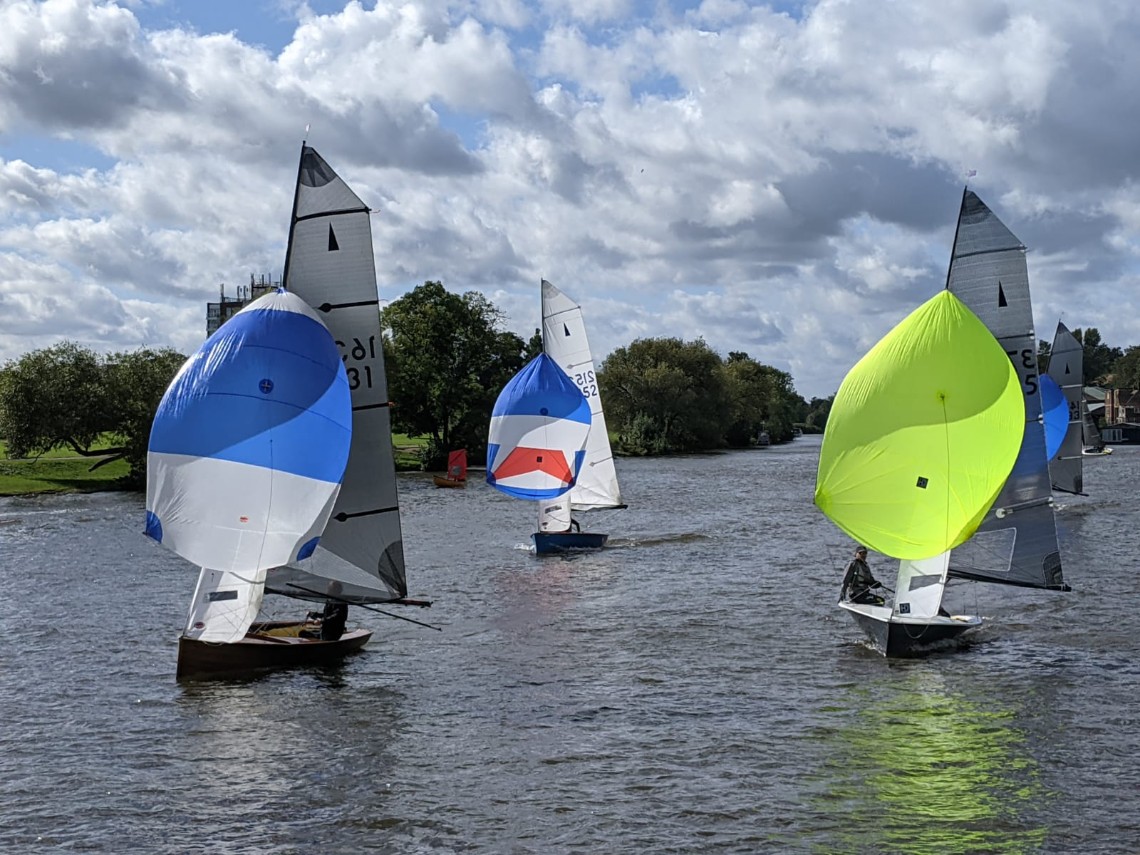 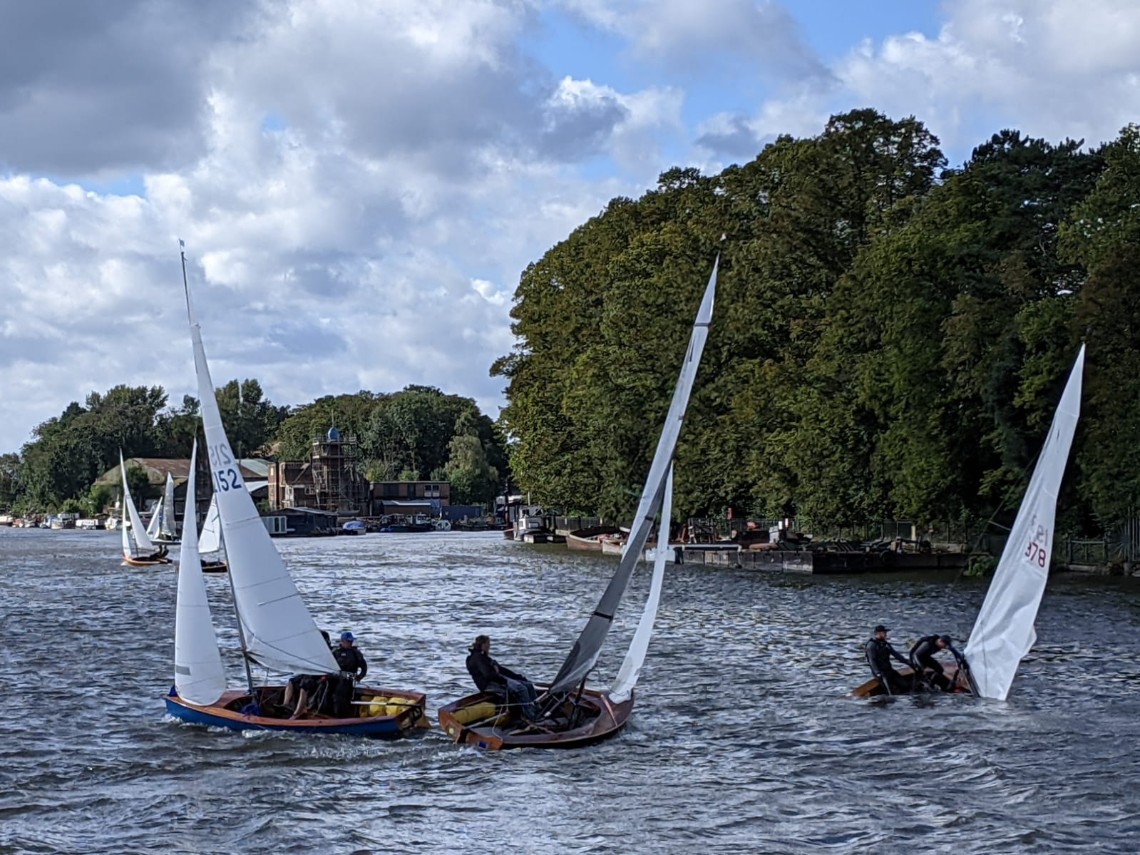 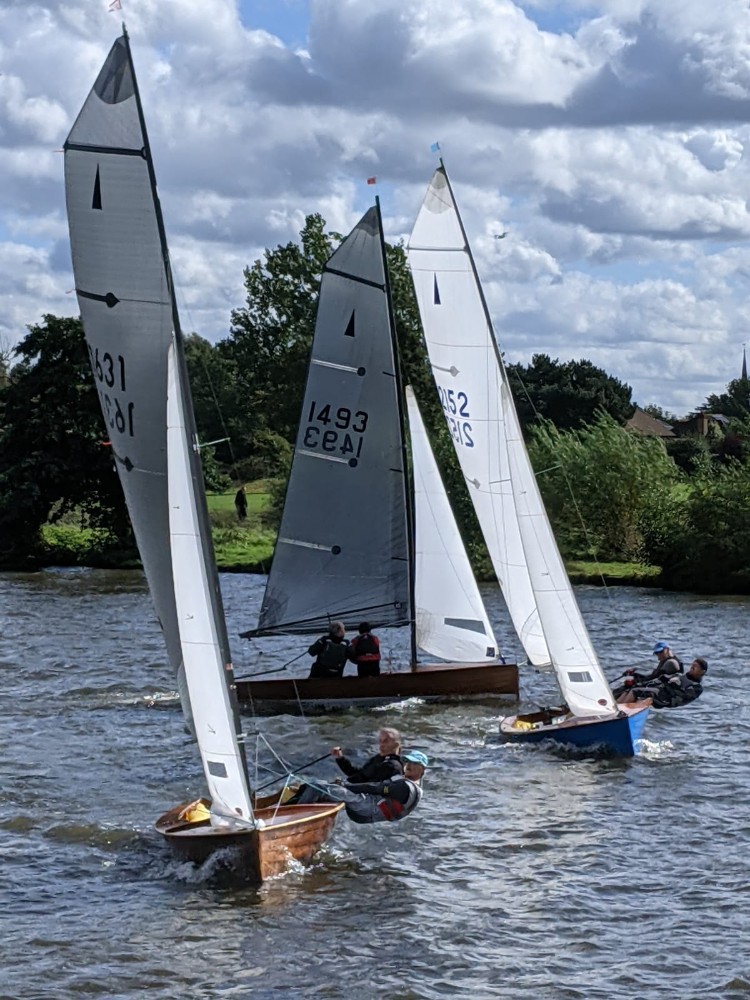 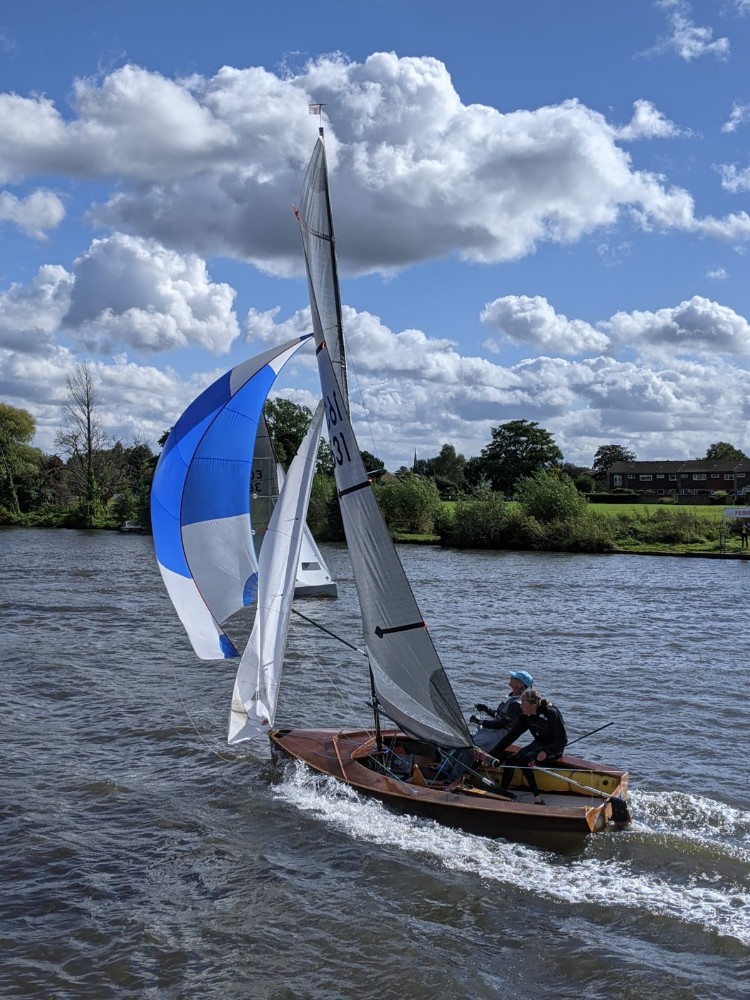 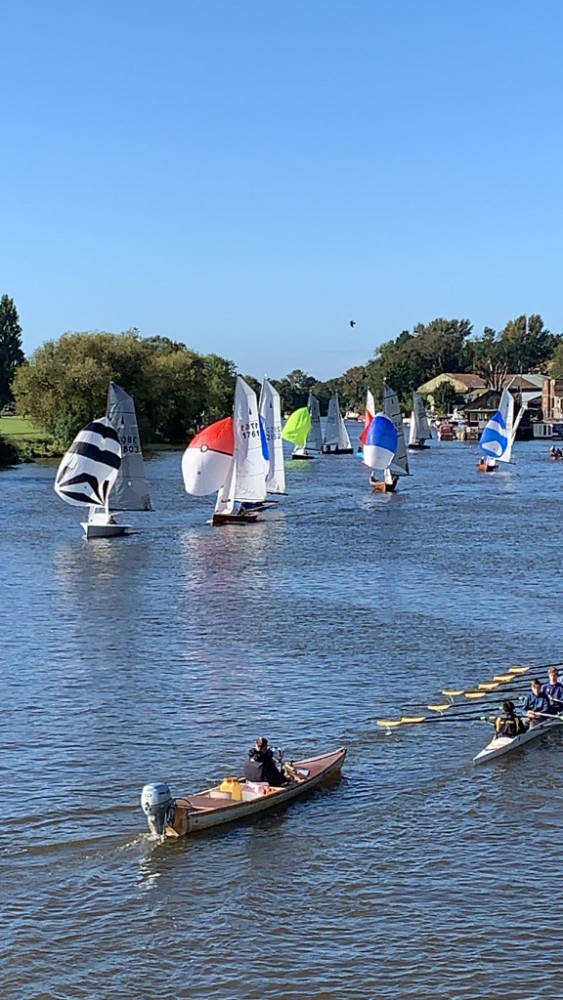 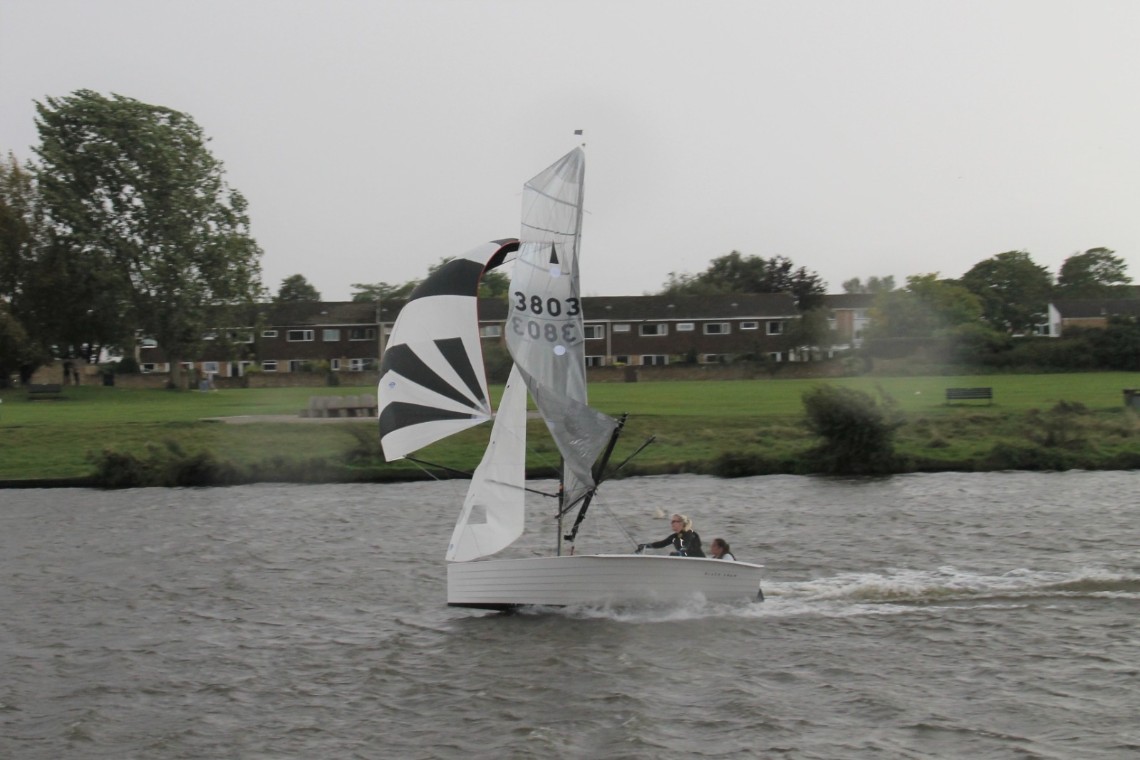 On Sunday morning the Merlin Rocket Craftinsure Silver Tiller & Thames Series fleet were welcomed with glorious sunshine and a fresh SW breeze blowing straight down the river. Despite the forecast showing lighter winds than the previous day, the wind was significantly stronger making for a great day’s sailing.

The fleet got off to a clean start in the first race with Caroline Croft & Anna Aylward making the best of the start from the middle of the line. They were chased by Phil Dalby & Fran Gifford, who managed to break away from the pack and initiated a closely fought duel between the modern wide boat and their vintage wooden boat. The finish was close with Caroline & Anna winning by a boat length from Phil & Fran in second, ahead of the chasing pack led by John & Livvy Bell who came in third.

At the start of race two, Caroline & Anna managed to break away again leaving the vintage boats to battle it out for second. A few boats fell victim to the strong gusts coming down the river keeping the rescue teams on their toes throughout. As with the first race, Caroline & Anna took the win with Phil & Fran in second and John & Livvy in third.

Race 3 started in a steady force 2-3 breeze with a somewhat reduced fleet of 8 boats after the tough going in races 1 & 2.

Phil & Fran got away to an impressive lead off the start line. However, the dark clouds were rolling in fast down the river. A squall hit the fleet hard, with 44knts recorded on the clubhouse anemometer. Almost simultaneously, all bar three of the fleet capsized within metres of the windward mark.  Phil & Fran and Caroline & Anna had already hoisted their kites, and both put on an impressive display of skilled sailing in heavy winds, blasting past the balcony of spectators on the clubhouse (as well as showing some worrying forward mast bend and one example of how to sail with a snapped gooseneck).

Unfortunately, the squall persisted. As Phil & Fran approached the leeward mark, they went forward to take their kite down, and in those conditions, capsizing was the only outcome.  The snapped gooseneck meant that event leaders Caroline & Anna had to retire.

Vintage boats don’t sail dry like the modern ones and so a majority of the fleet had to retire. Only Paul Dean & Hannah Burt and Joe McLaughlin & Sean Anderson managed to emerge from the chaos upright and in one piece! They went on to take the race win and second place. John & Livvy came in with a consistent third after a few laps spent draining their boat, with Andrew & Ellie Mills finishing in fourth and Phil & Fran in fifth.

The De May Series for 2021 got off to a great start in April at Fishers Green, and the Thames Series started shortly afterwards with a very well-attended event at Ranelagh.  Over the course of 8 events in the Thames Series, with an additional 3 to make 11 in the De May, there was a wide variety of venues – reservoirs, lakes and the river, and a range of weather conditions from no wind at all (leading to the abandonment of one day at Upper Thames), to a boat-breaking squall at Hampton.  Across all the events, 60 boats competed in the De May, and 53 took part in the Thames Series.  All the clubs visited were very welcoming and hospitable.  Both series were hugely enjoyable, and closely-fought to the end, leading to the results below.

The ‘Most Original Boat’ prize went to 1939 War Horse, owned by Peter Impey from Tamesis SC, and the ‘Most Improved Newcomer’ is Richard Burton of Medley SC, in 2037 Lady Hyperion.