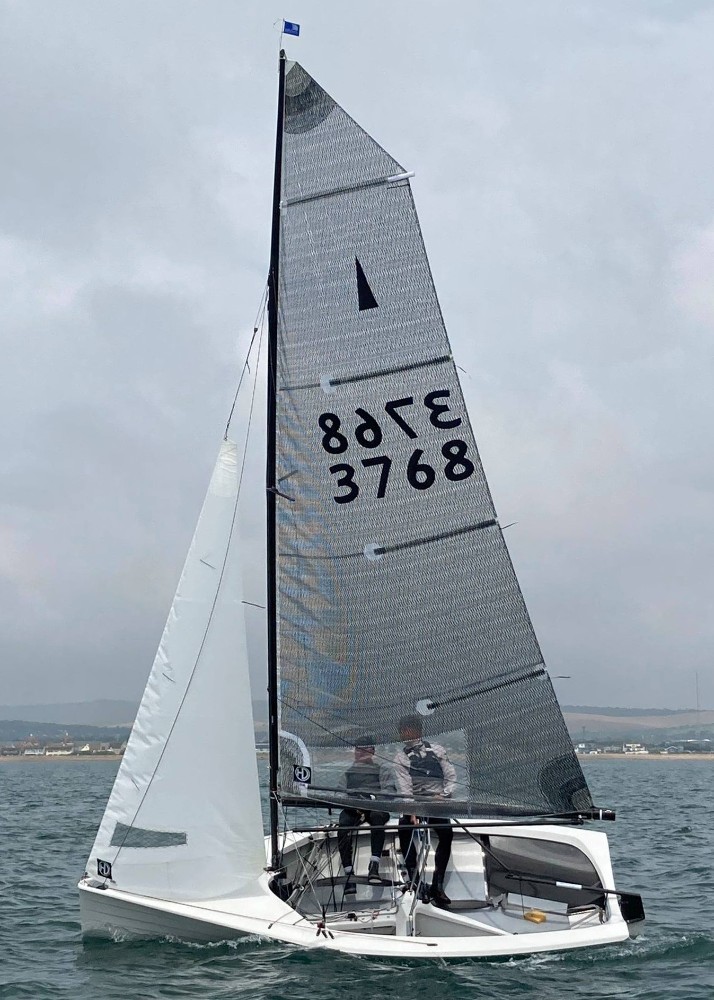 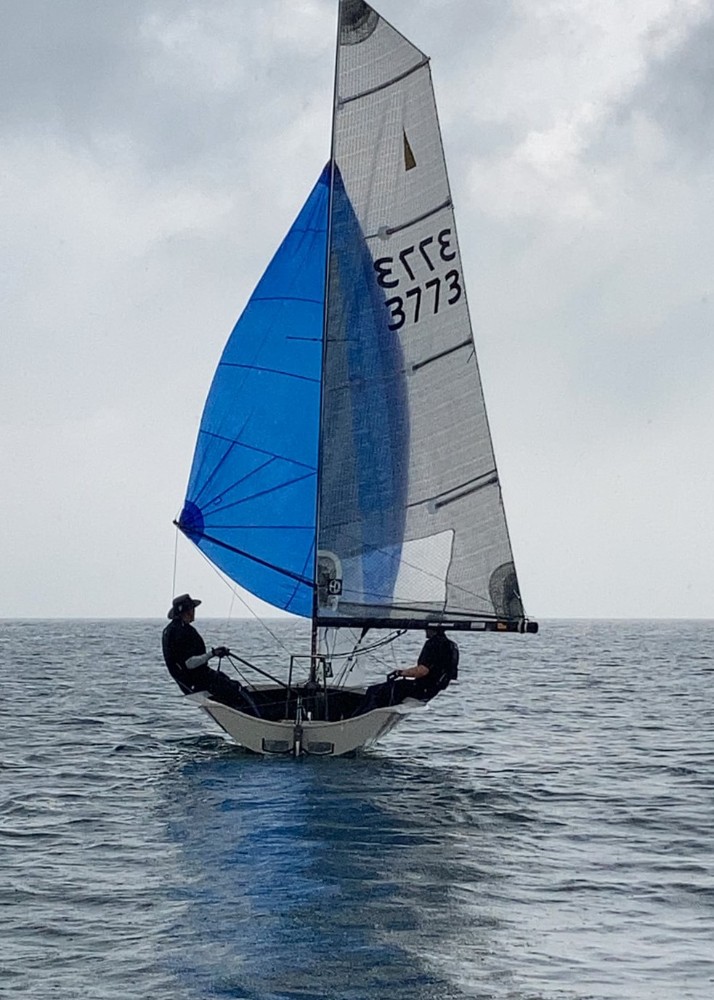 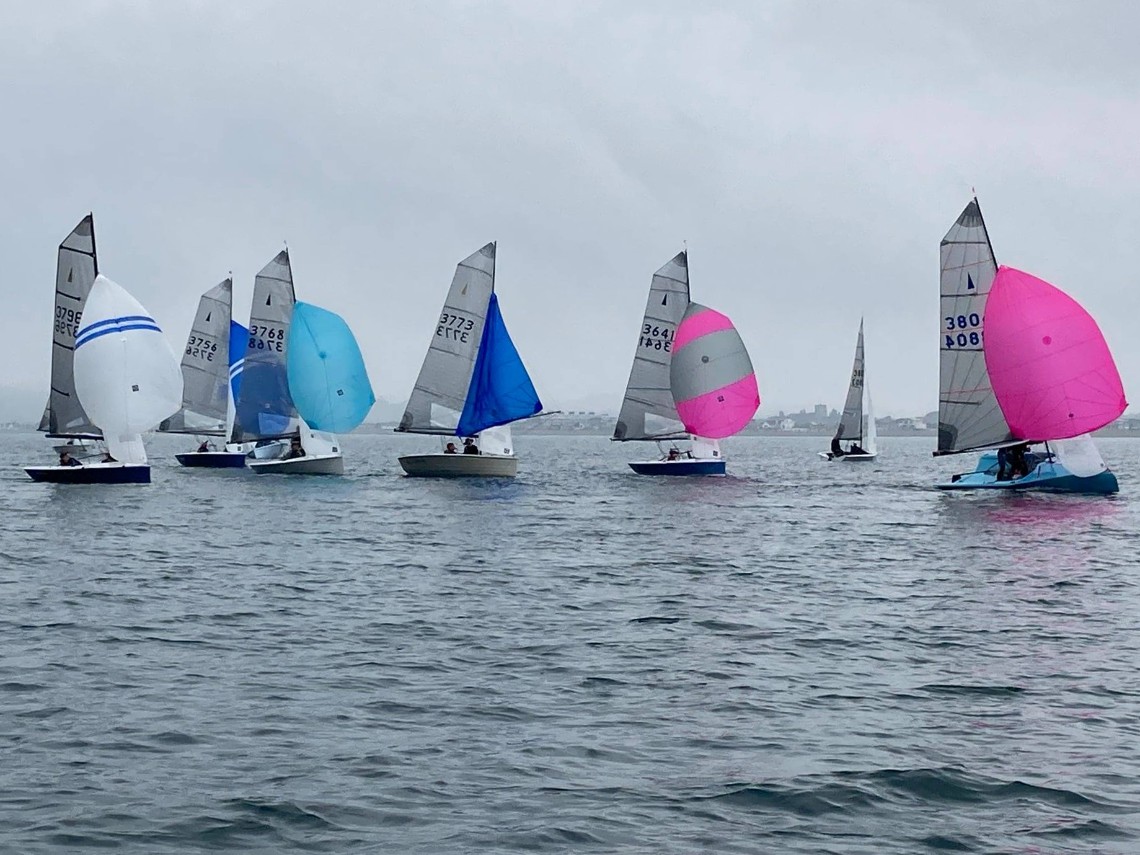 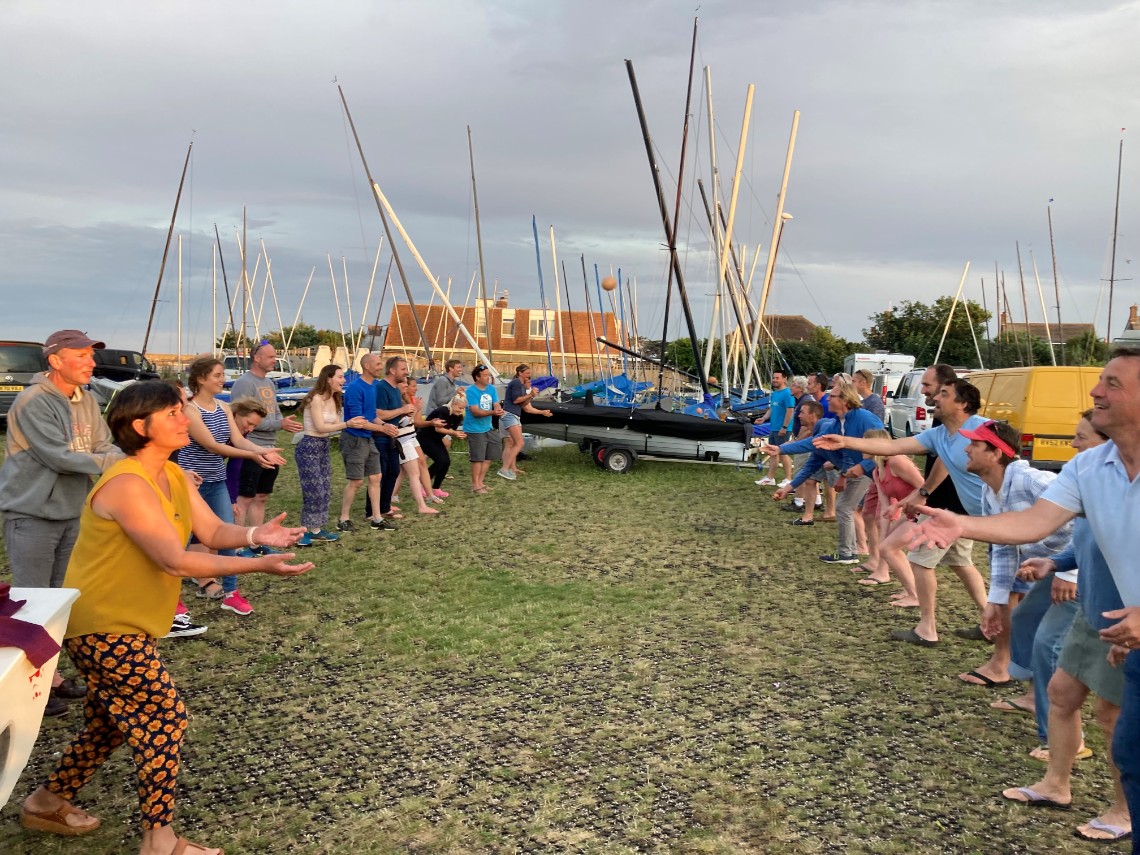 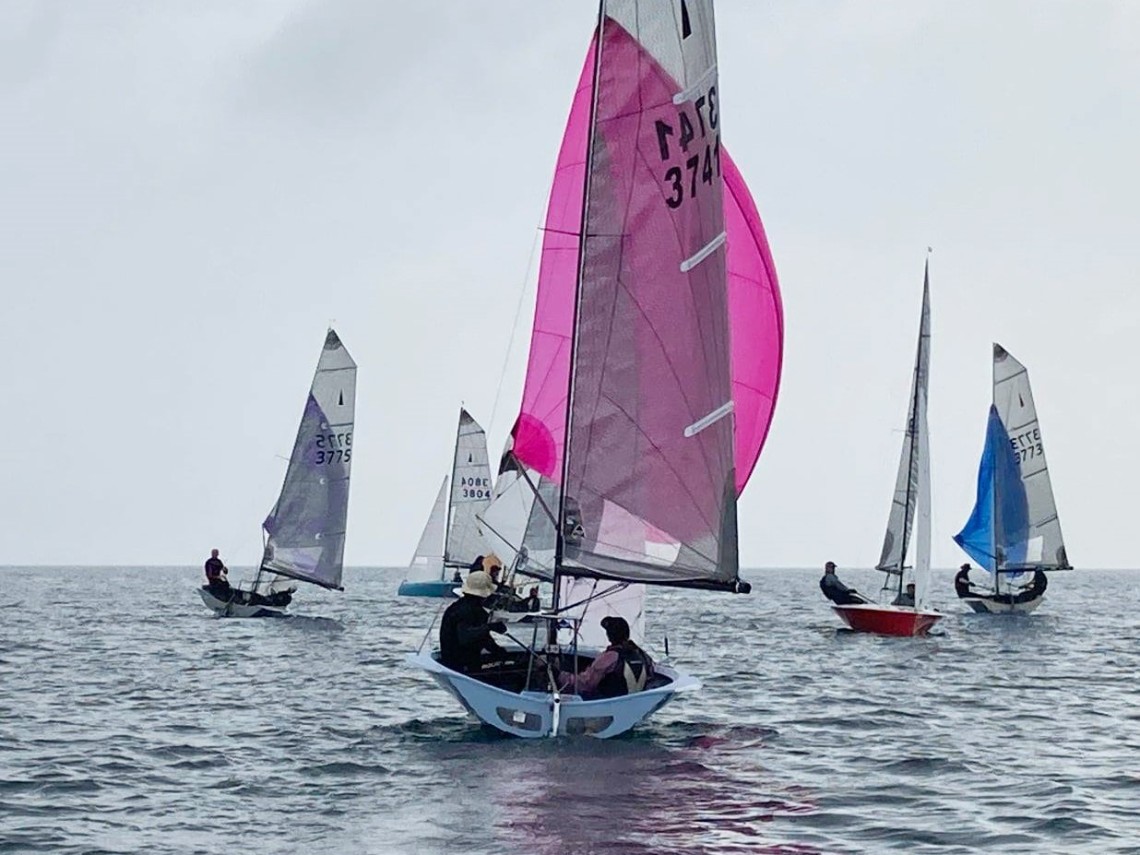 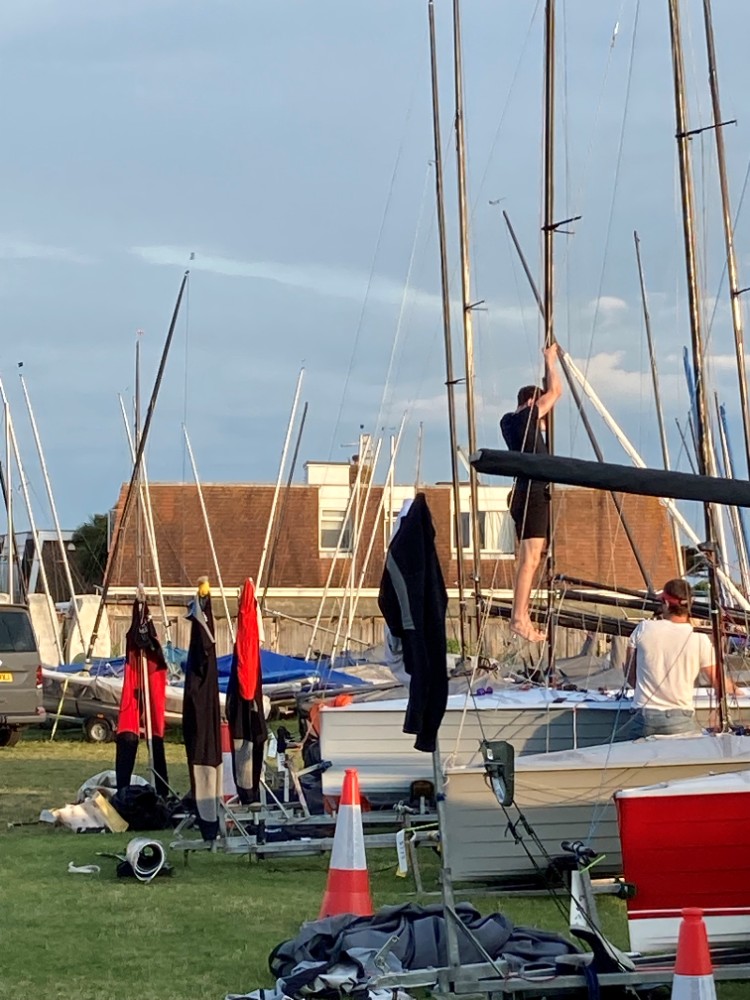 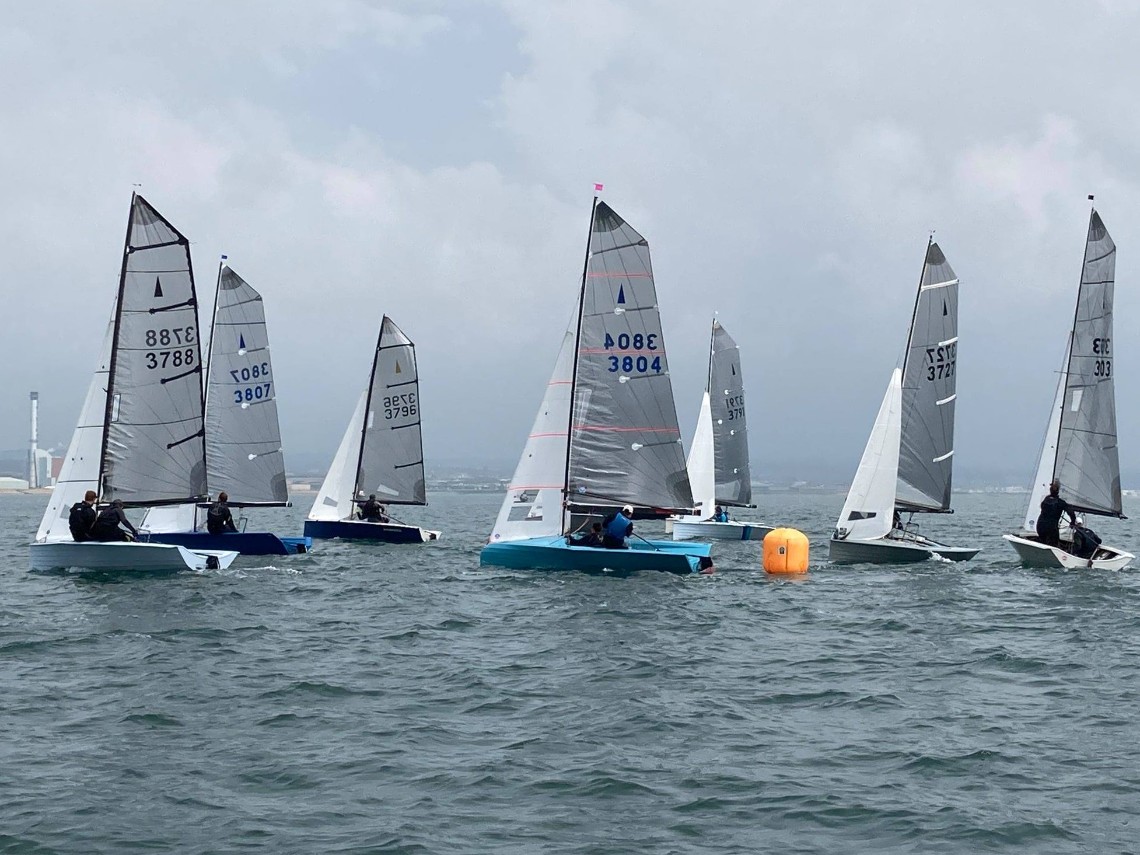 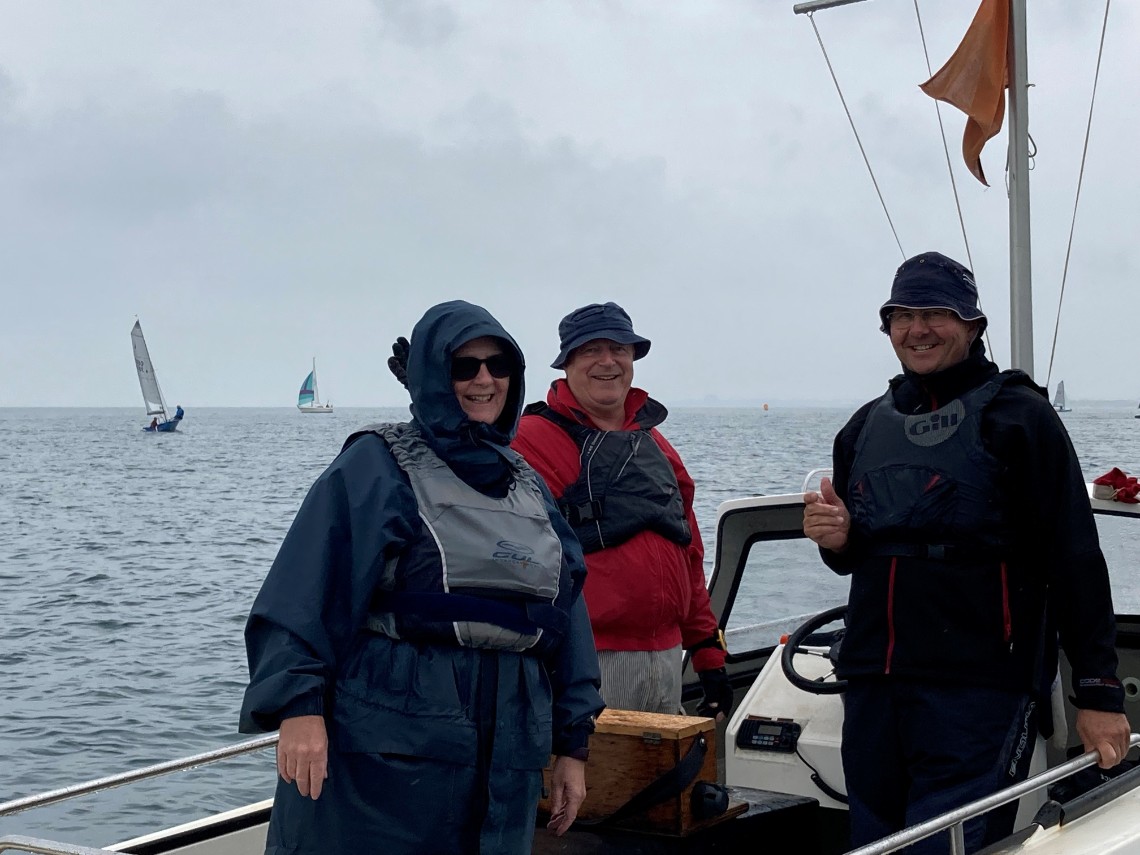 On Saturday 24th July, 24 Merlin Rockets went to Shoreham Sailing Club to enjoy some fabulous sea sailing for the Craftinsure Silver Tiller, where the locals promised us big waves and a good breeze, and some valuable Nationals practice.

We launched at high water, which meant the tide would be flowing towards Worthing for the duration of racing and we had a gentle breeze, starting off from the east, and swinging round to the South in the afternoon. The course was Sausage, Triangle, Sausage.

After one false start, the fleet got away on the second attempt, with Ian Dobson/Charlotte Fildes winning the pin end and getting to the windward mark first and leading to the finish. There was a battle for second between Christian Birrell/Chris Kilsby and Tom Gillard/Rachael Gray, which turned out to be in vain, as they were both over at the start, along with a few others, and failed to go back through the line, so second went to Ian Sharps/Alex Warren and third place was Ben/Roz McGrane.

We had to wait while the marks were adjusted before race two to accommodate the shifting breeze, but the wind direction was more consistent and had built a little so we could hike out and stretch our legs. Ian/Charlotte had another good start and got to the windward mark just in front of Christian/Chris and Tom/Rachael. Ian/Charlotte managed to just keep ahead of Tom/Rachael in second, who managed to sail through Christian/Chris who finished in third.

The third race was trickier, with the wind easing off a little, and some big gains to be made on the left hand side of the beat. Christian/Chris did an excellent job of fending off Tom/Rachael in second and Caroline Croft/Chris Gould taking third from Ian/Alex.

We came ashore after three races, with the discard already in play leaving Ian and Charlotte the overnight leaders, and really enjoyed the evening sunshine, BBQ, live Sax and the DJ, and of course the main event – the egg throwing competition, which was very hotly contested, but an outstanding performance from Tom and Rach meant they were victorious, while the rest of us were left covered in egg.

Sunday morning was grey and wet and there wasn’t much wind forecast, however we all rigged and launched and sailed out to the race area like good little merlin rocket sailors. The breeze was light, but there was enough for racing as it turns out. The wind shifted just as we were about to start race four, so the AP was hoisted with less than 10 seconds to go and the marks were moved, and then the racing got underway. First to the windward was Christian/Chris, followed by Tom/Rachael and Ian/Charlotte in third and that was also the finishing order.

After the finish, an ominous wall of rain travelled across the water from the land towards the fleet, and promptly soaked us all, but before we got the chance to get too cold, the race officer sounded the warning signal for race five and off we went again. Christian/Chris rounding the windward mark first and holding onto the lead again, with Tom/Rachael hot on their heels, but this time with Tim Saxton/Mary Henderson finishing in third.

So for the final race, it was still all to play for. With the black flag in use, there were a few interesting starting maneuvers to avoid being OCS but it looked like the left was going to pay. However, towards the windward mark the wind went really light, and Tom/Rachael came in on a great shift from the right to round first. Second to fifth places were really close, but by the end of the run Ian/Charlotte were second, Tim/Mary third and Christian/Chris were fourth. Up the final beat Tim/Mary managed to sail into second by staying right, and Ian/Charlotte finished third in front of Christian/Chris, which meant Tom/Rachael just pipped Christian/Chris by one point to take the overall win with another stellar performance.

First in the silver fleet was James Wells and Anna Aylward, first Bronze fleet was Geoff and Helen Kimber and first Shoreham boat was William Warren and Megan Pascoe.

Thanks very much for the great hospitality both on and off the water from Shoreham Sailing Club as always, and the race officer and his team for getting the whole series in despite the forecast.