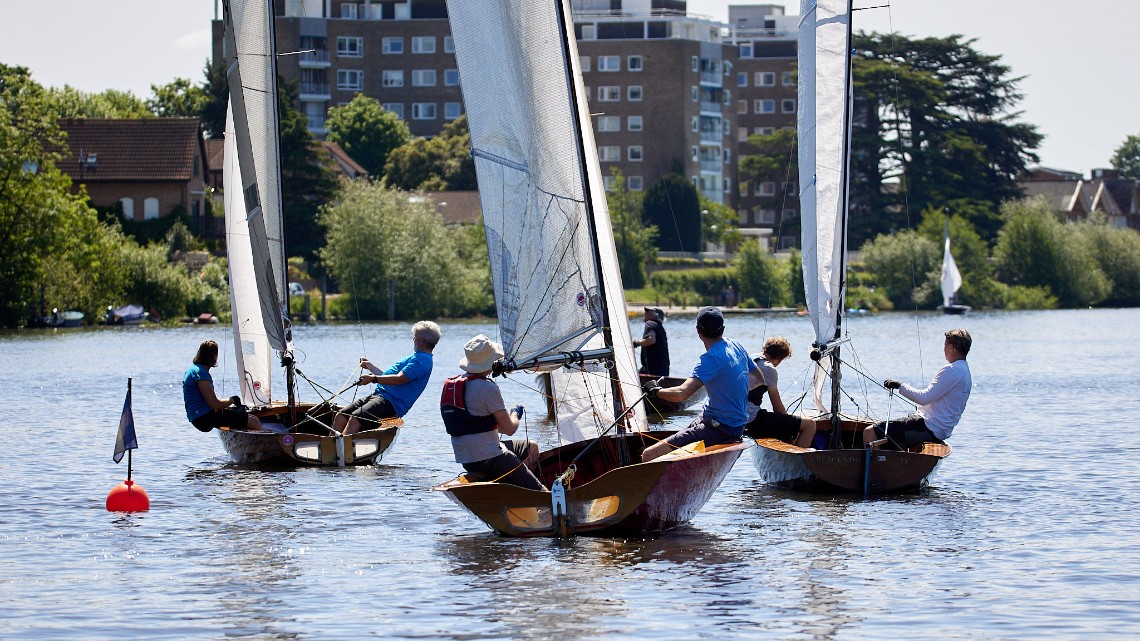 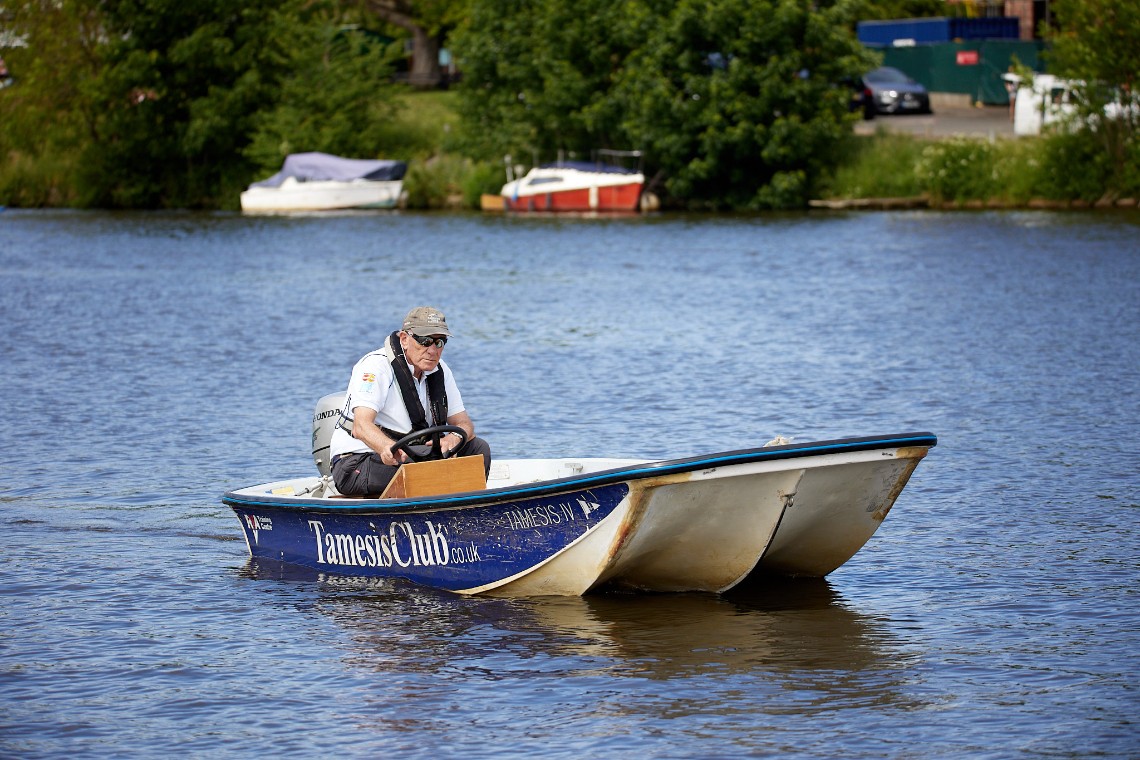 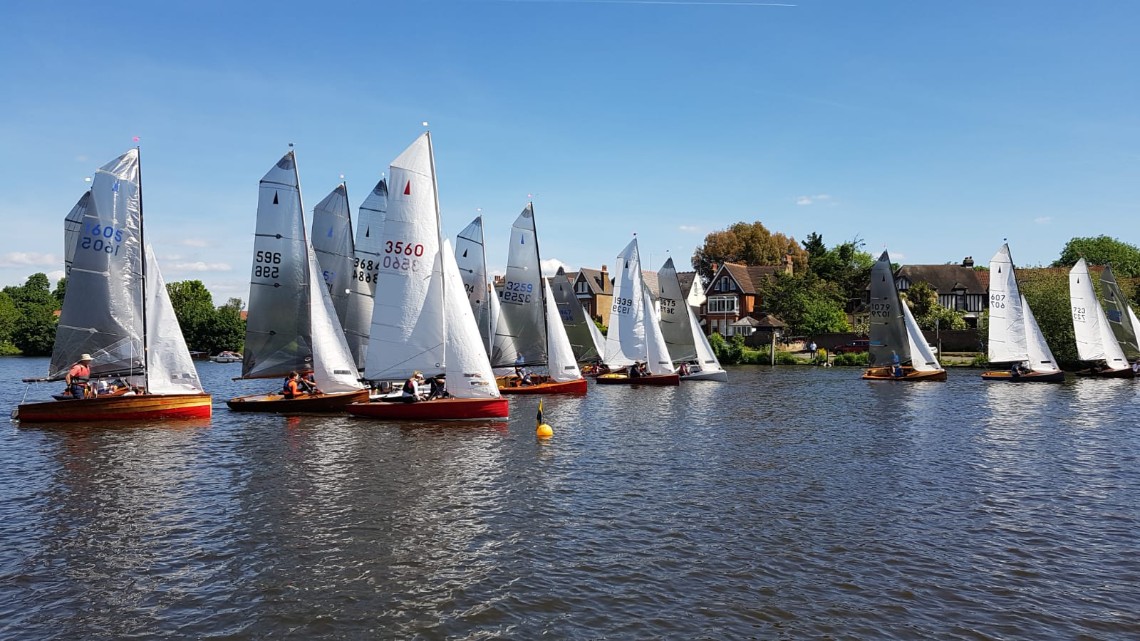 Sixteen boats turned out on Sunday 22 May at Tamesis Club for the Silver Tiller and Thames Series, both sponsored by Craftinsure. Also, at stake on the day were the Sondown Cup and the Elizabeth Bowl.

It turns out that Chris Simon the on-water Rule 42 judge for the Craftinsure Silver Tiller never had to blow his whistle at the front of the fleet.

As ever, like the Premiership table that was finalised the same weekend the competition was extremely tight while the results speak for themselves.

For readers unfamiliar with Tamesis it is a beautiful oasis of tranquillity in west London. Very picturesque with winds that are predominantly light as the water is not wide or open. The Thames on this stretch is nestled between residential houses, park trees and some larger buildings upstream on the Surrey (Eastern) side.  Racing at Tamesis is very much an exercise in zephyr seeking, quick reactions to significant wind direction changes (sometime 180 followed by 360 degrees) and local knowledge is key.

The inevitable slower speeds mean less is more; less wetted surface area that is. The Classic and Vintage Merlins of yesteryear, with their narrow hulls and lots of rocker, are super-quick in these light conditions. The more modern wide Merlins, made for sea surfing, suffer.

The club has always been incredibly friendly and accommodating of guests, and the hospitality at this event was second to none. The on-the-water competitive spirit was relaxed, and the breakfasts and lunches were wonderful. There was no doubt everyone had a fabulous day and the club, yet again, excelled in very positively marketing itself as a fun and friendly place to race.

In bright sunshine and a promising southerly there was reason to feel positive. Conditions were marginally steadier than the Saturday Vintage and Classic racing, but only really settled for races 3 & 4 of the day where sailors were rewarded with moments of hiking, re-finding flat mode and a couple of nearly powered up runs. This gave everyone something to play with and the kind of close scrappy racing some enjoy!

A lot of the bits in-between the gusts were best described as "the dodgy bits at Salcombe" with occasional chop from speeding river ferries a challenge when you’re just trying to hold some shape in your sails from the lightest of zephyrs, not to mention the distraction of watching people falling off SUPs.

As an Open event the Silver Tiller introduced some modern Merlins known to win convincingly in the right conditions. Sadly, the wind gods were not playing ball and the competition remained in the narrow boats. Rob and Hatty Cage had departed the evening before something about a party, only to be replaced by arch spoiler Richard Harris, crewed by Sara Warren in the unpolished but racing fast Passing Cloud.

A light breeze challenged the racers with a quantum-style puzzle with every wind direction all at once, the first race was won with aplomb by Ollie Houseman and Harriet Sandall sailing Luka, Crescendo in 2nd followed by Passing Cloud. These three boats went on to slug it out across the next three races with Passing Cloud winning Race two and Crescendo triumphing in race 3.

With it all to play for in race four the drama unfolded in slow motion as Richard and Andrew went head-to-head in a race described as more exciting than watching the Hamilton versus Verstappen final lap. In the end, with a dying breeze, Richard and Sara were able to sneak away leaving Andrew and Matty in 2nd, with 3rd place scooped up by Joe Mclaughlin and Sean Roberts showing their promise too late in the day to make the podium overall.

A great weekend of sailing beautiful boats with intense racing. You had to see it to believe it, get involved.  Many thanks to all those at Tamesis for hosting the event.

The on-the-water competitive spirit was relaxed, and the breakfast and lunch were wonderful.  There was no doubt everyone had a fabulous day and Tamesis, yet again, excelled in very positively demonstrating itself as a fun and friendly place to race.

The next Craftinsure Silver Tiller is at Lymington Town Sailing Club on Sunday 12th June. With class training on Saturday 11th. Those wishing to join the training can sign up via the MROA website https://www.merlinrocket.co.uk/index.asp?pg=fixtures&eid=1143