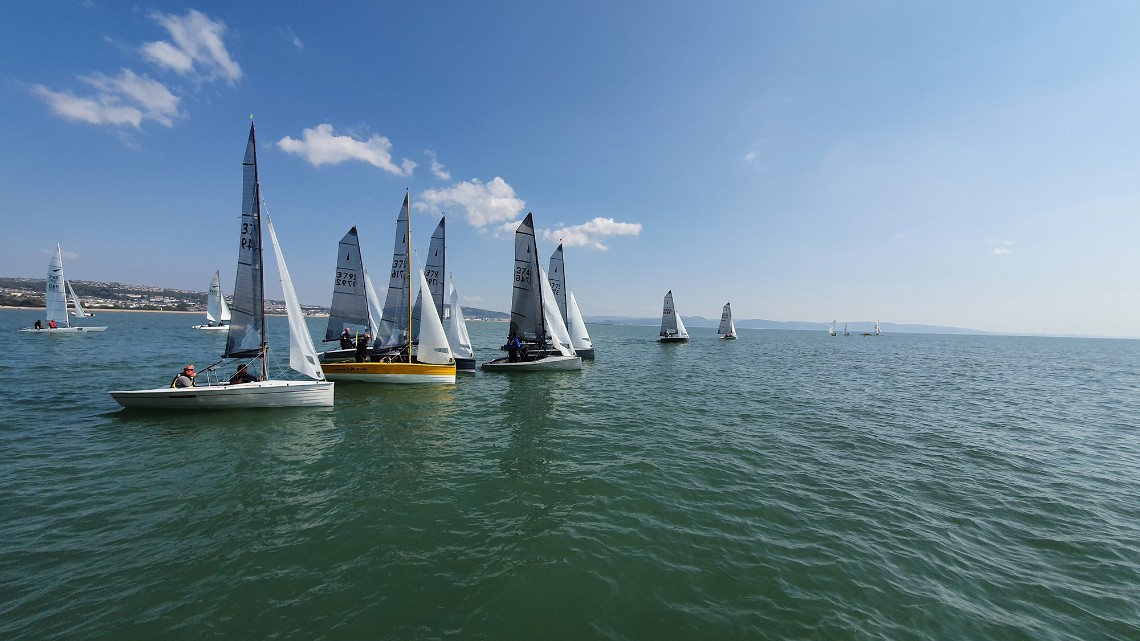 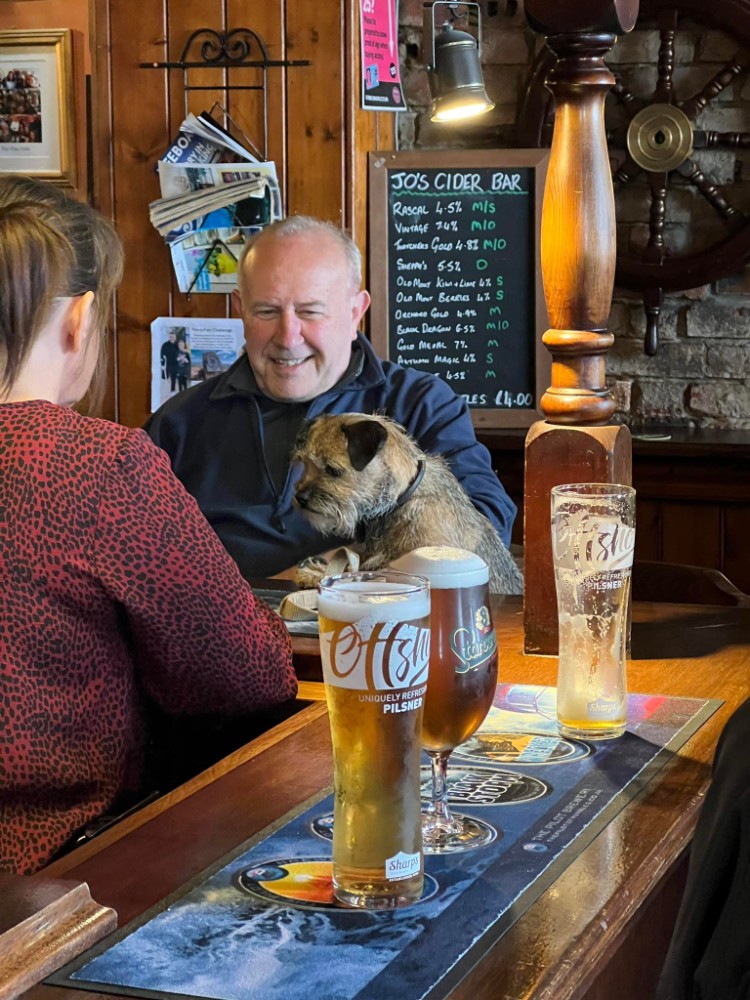 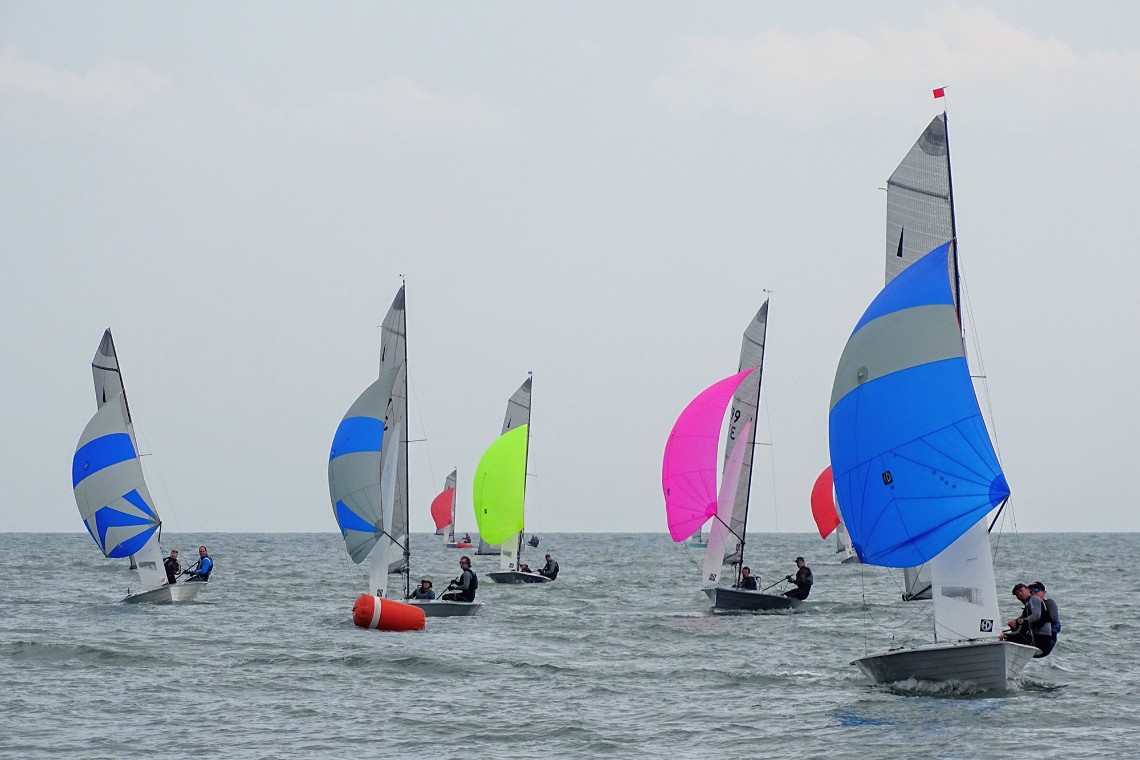 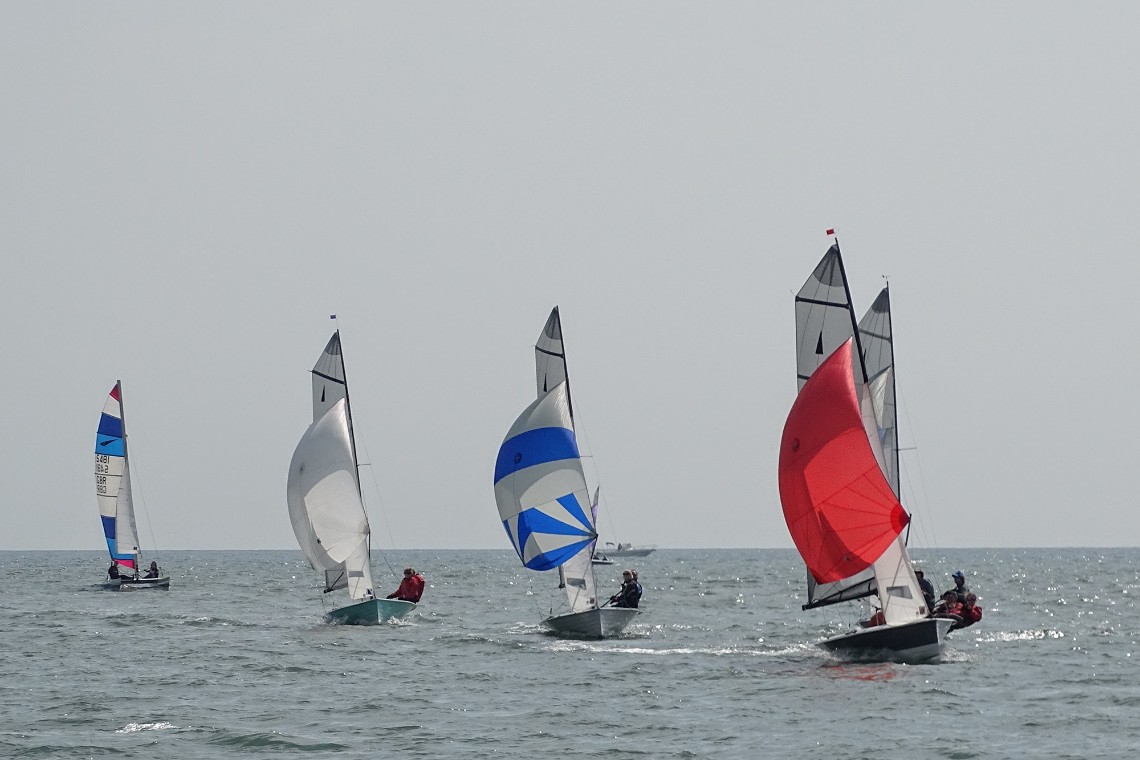 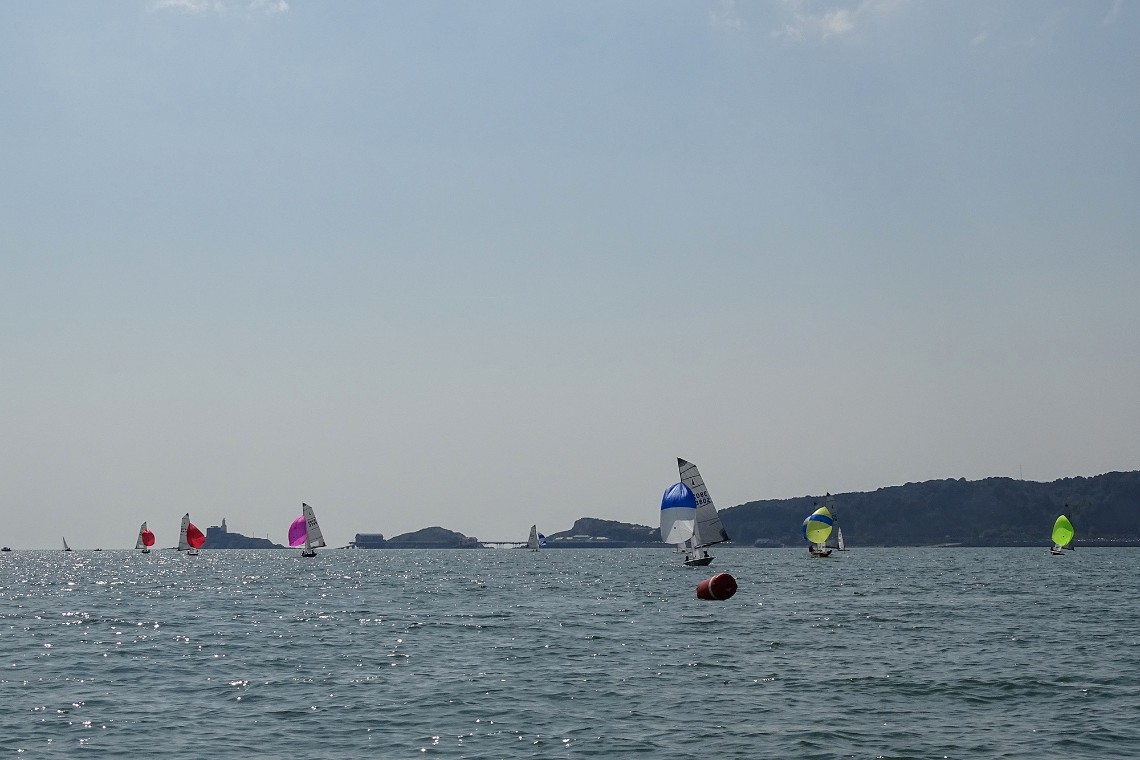 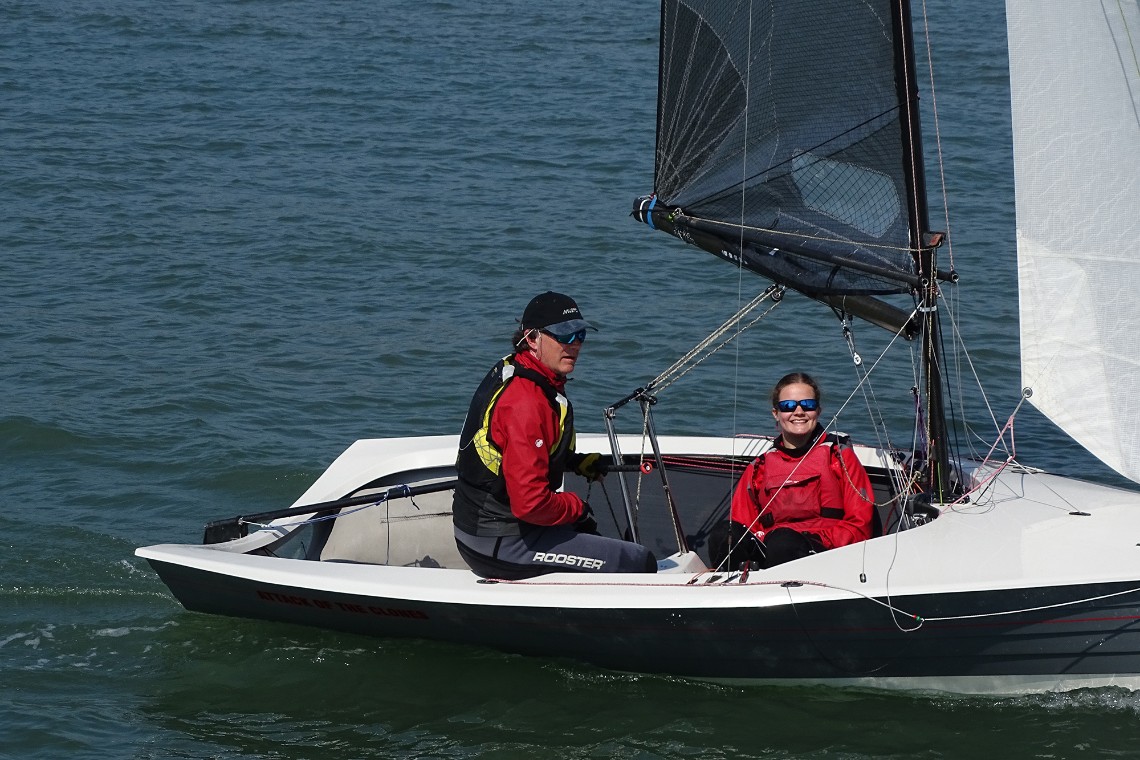 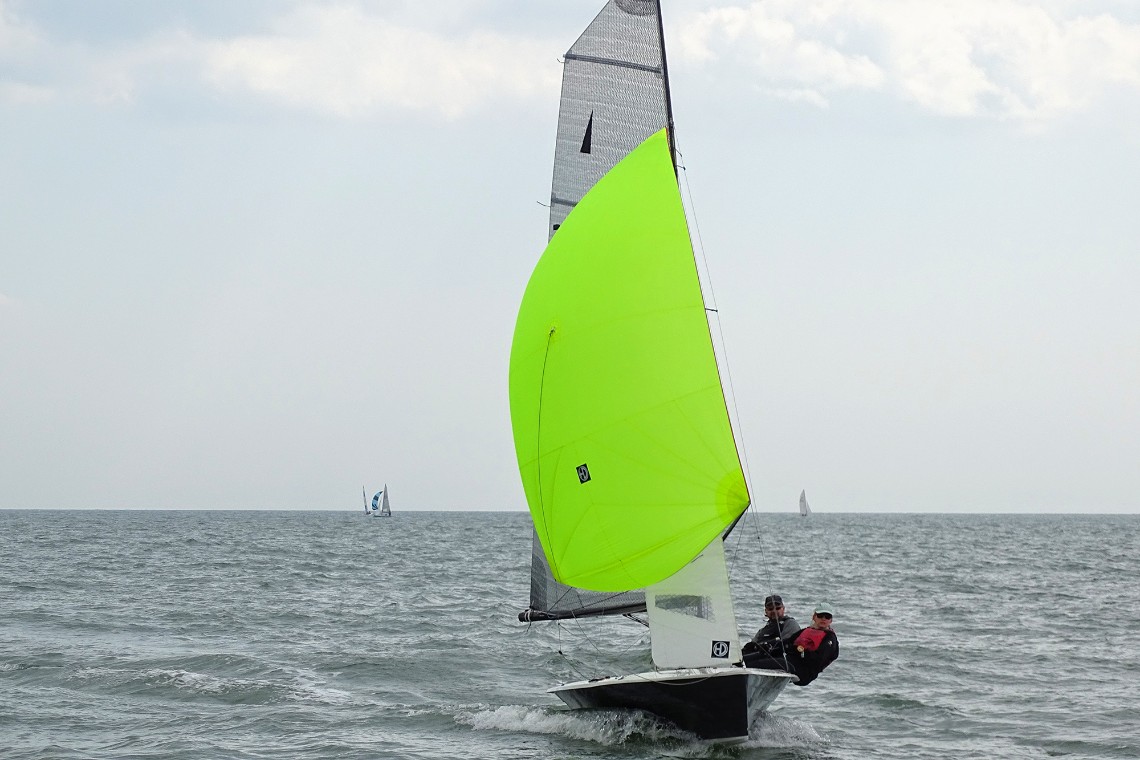 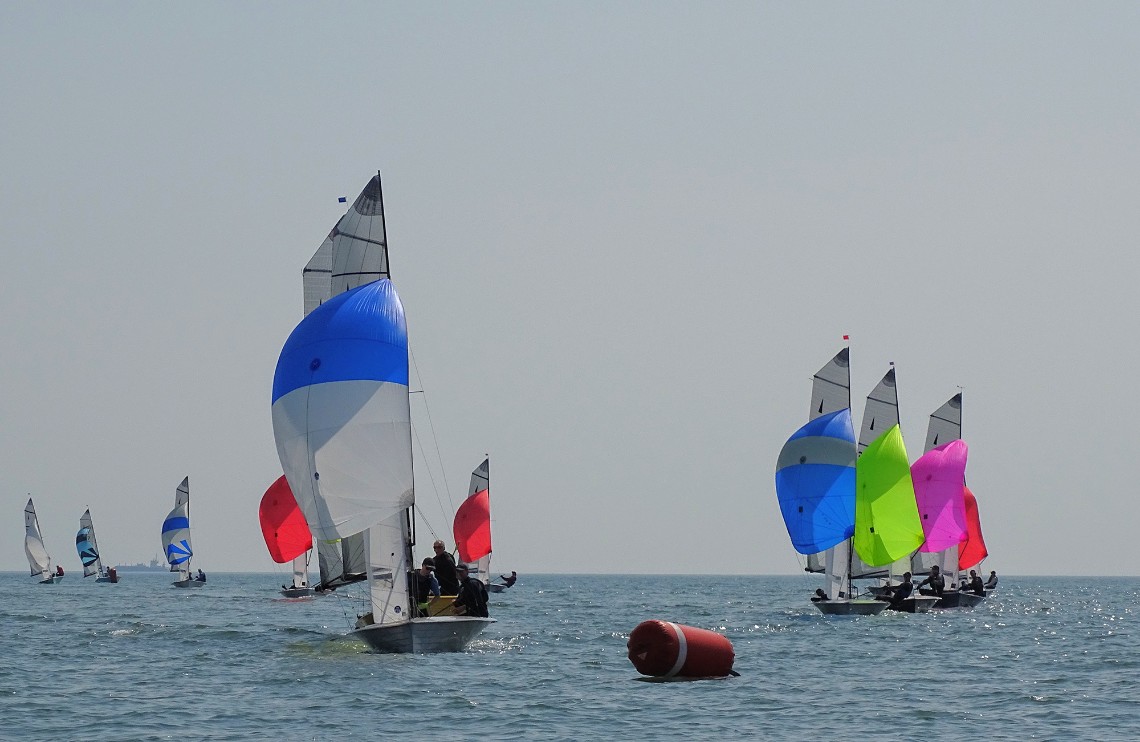 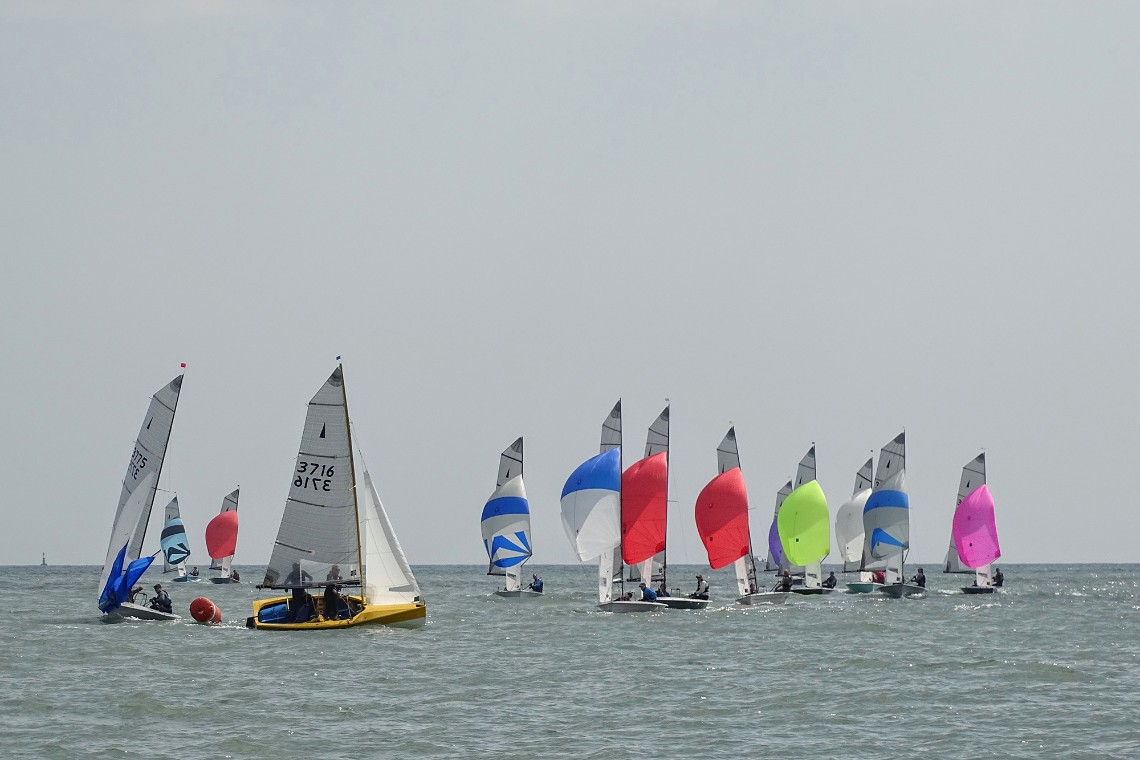 The weekend of the 23rd & 24th April welcomed a return for the Merlin Rocket fleet to Mumbles Yacht club for Round 6 of the Craftinsure Silver Tiller.  After a fairly long trek for several teams travelling the day before, a lot of people turned up on the Friday evening where talk in the club was rumoured for big breeze on Saturday which was the looking likely on all the forecast websites.

Saturday morning was greeted with clear skies and an 18-knot breeze which was forecast to build. A Slick briefing from the PRO while many teams consumed a pre-match bacon bap and coffee for the 11 am start.

Launching wasn't too bad although some boats chose to stay ashore or return home and at least one decided to return to shore for ice creams.  Conditions were very tricky in the bay. The short steep waves were at an angle to the wind making downwind sailing a challenge. The small fleet got away after a postponement to set the course.

Quite a lot happened. Two capsizes on the first beat. Simon Potts and Sam Mottershead binned it on a tack near the port lay line - new burgee required and a close up of those lovely orange foils. Mark Stockbridge and Chris Sanders also capsized tacking and were able to get very close to the only boat moored in the bay.

Colin Anderson crewed by dog handling expert Matt "Woodhouse" Biggs sailed a clean race and looked on track to score a maiden Silver Tiller race win. However, deciding to finish after only 2 of the 3 scheduled laps proved costly. It only took them 10 minutes to figure out the mistake as they watched everyone carry on racing.

This left Paul Rayson/Christian Hill to take a clear win, followed by James Well/Anna Aylward and a recovering Chris Jennings/Pete Nicholson after a costly swim on the run.

By the finish, the wind was gusting over 30 knots and the race team wisely decided to abandon for the rest of the day.

Getting ashore was the realisation of the concerns from Friday but went smoothly due to the amazing onshore team at Mumbles catching boats and trollies on standby.

This left the fleet free to occupy themselves in various pubs for the afternoon. Colin Anderson and Matt Biggs volunteered to perform an in-depth survey of the drinking establishments in Mumbles. The report of their findings is being reviewed by Sue Gray.  Many teams ended up at the clubhouse for drinks at a very welcoming and very well-stocked bar.

Sunday morning brought blue sky and a gentle breeze of 5 to 10 knots and for some, after having a good Saturday night and a few sore heads this was welcomed.  The start was delayed 30 minutes to build and steady direction wise.  Race 1 got away cleanly with Simon and Sam sailing high and fast charging up the first beat followed by Steve and Gill Leney.  These two boats had a good margin on the rest of the fleet and changed positions up the next beat.  Further behind there was a good battle going on for third with a pack of four or five boats were possible of capable of claiming.  Chris Jennings/Pete Nicholson managed to take 3rd with a good battle from the two Paul's - Paul Dean/Hannah Burton and Paul Rayson/Christian Hill.

Race 2 saw a general recall as pretty much every boat was keen.  The second start got away cleanly for race 2 which saw the breeze build slightly to a constant 10 knots.  Again Simon/ Sam and the Leney’s were around 1st and 2nd at the windward mark.  The next pack saw a very tight bunch battling it out.  Mark Stockbridge and Chris Sanders picked a good shift on the last beat to creep up to 3rd though Chris/ Pete managed to get past on the last reach with the Leneys in 2nd and Simon/Sam taking another bullet.

Race 3 saw the breeze dropping to marginal hiking conditions and a general feeling that the breeze was going to drop.  Paul/Christian led at the windward mark followed by the Leney’s then Simon/Sam.  Nigel and Freya Hudson had a very good beat charging through the middle of the beat closely following the first three around.  The conditions were very shifty and it was key to keep in the pressure.  Simon and Sam worked their way into the lead and held for a comfortable win followed by Chris/Pete with the Leney’s finishing 3rd.

A really good day racing thanks to the race officer and crew in challenging conditions getting 3 very competitive races in. The prize-giving was held on the rooftop of the club in blue sky and sunshine which saw off a great weekend.  A big Thank you to Mumbles Yacht club for a great weekend on and off the water.

Simon and Sam took the win, Gill and Steve Leney were second with your reports Chris and Pete in third. First in the Silver Fleet went to Paul Dean and Hannah Burt and first in Bronze to Nigel and Freya Hudson.

Next up the Silver Tiller heads to Rock Sailing Club on the 30th April and the 1st May.

Thank you Chris Jennings/Pete Nicholson for the report