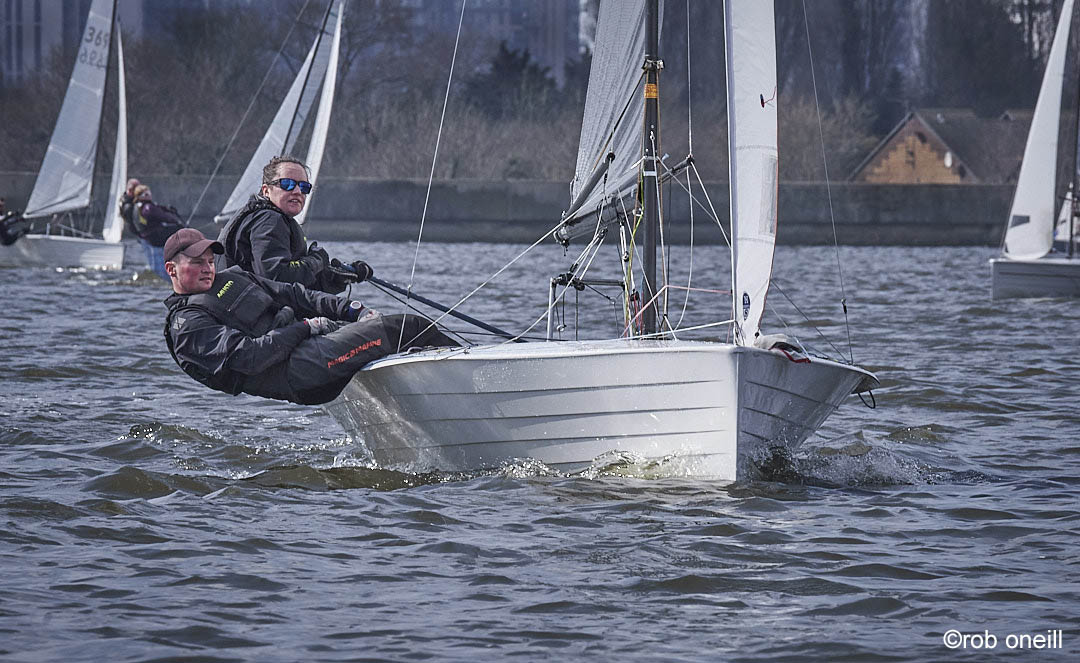 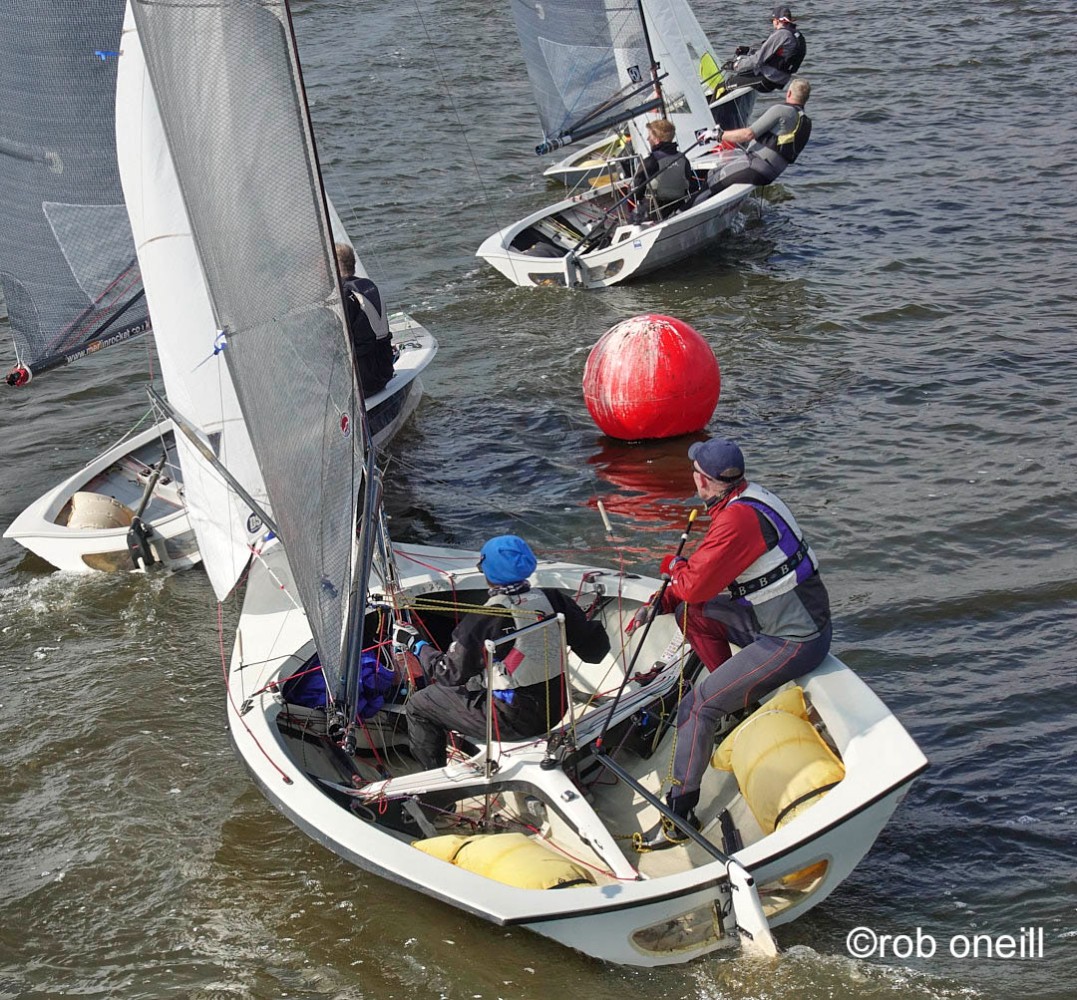 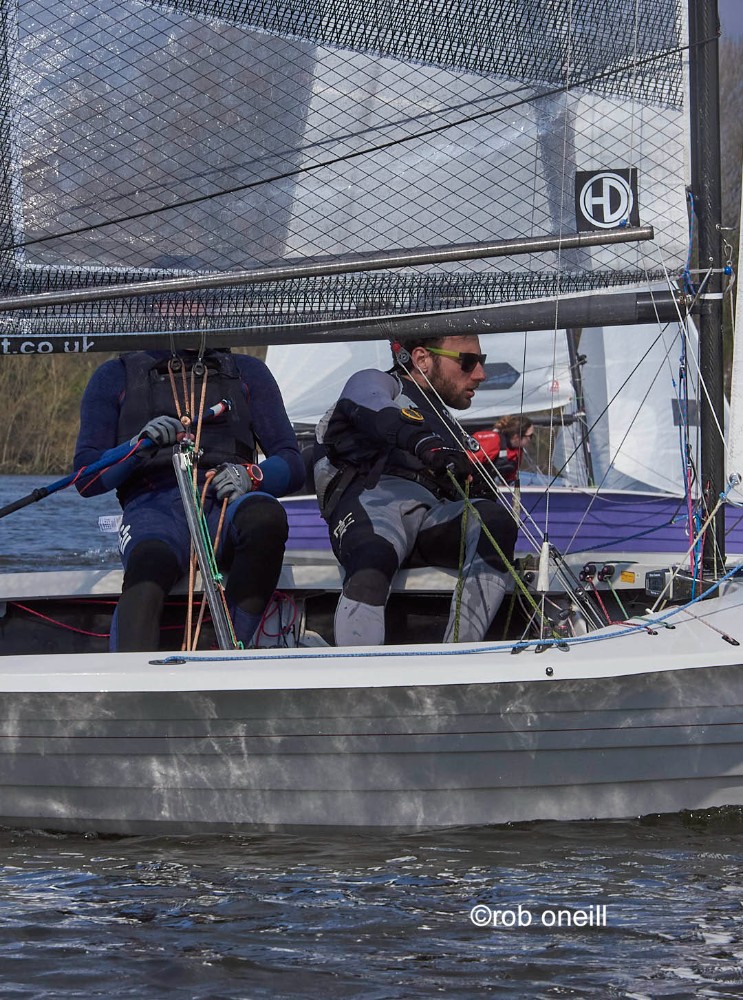 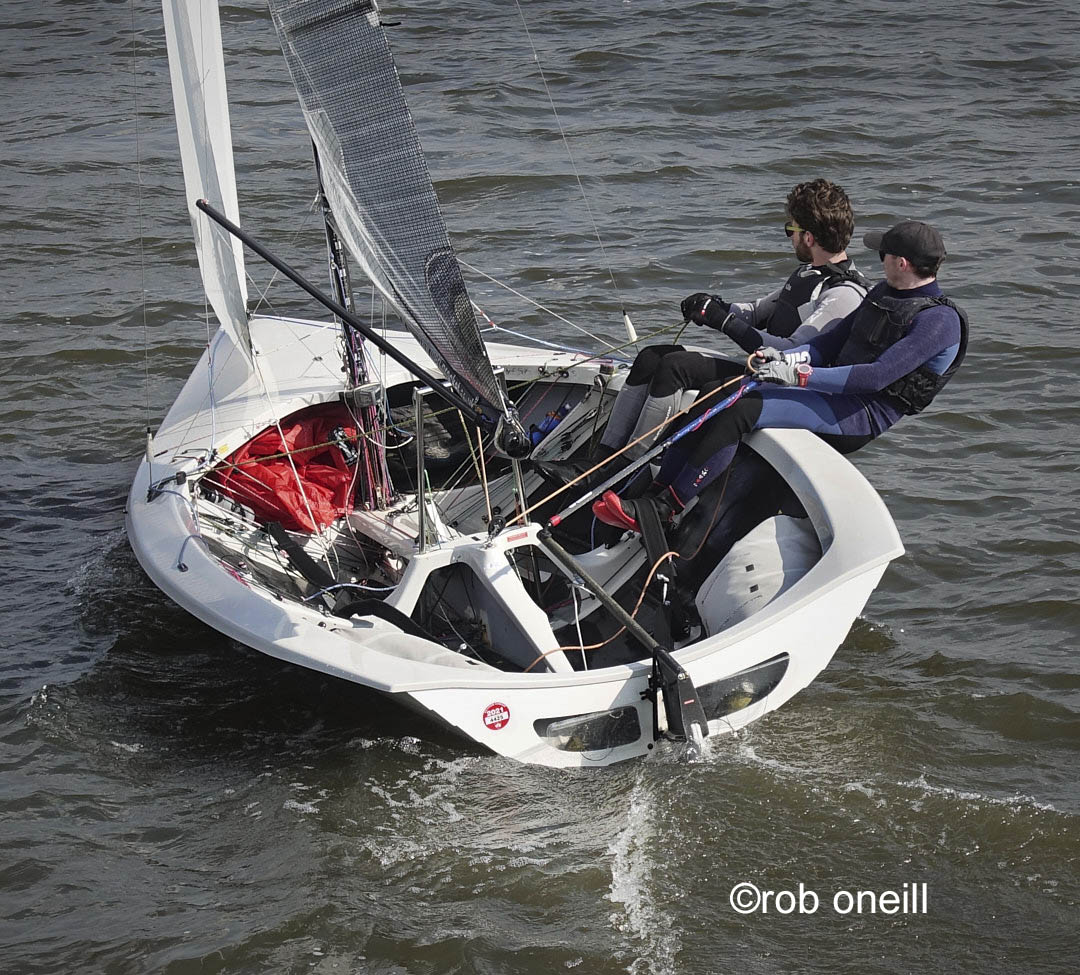 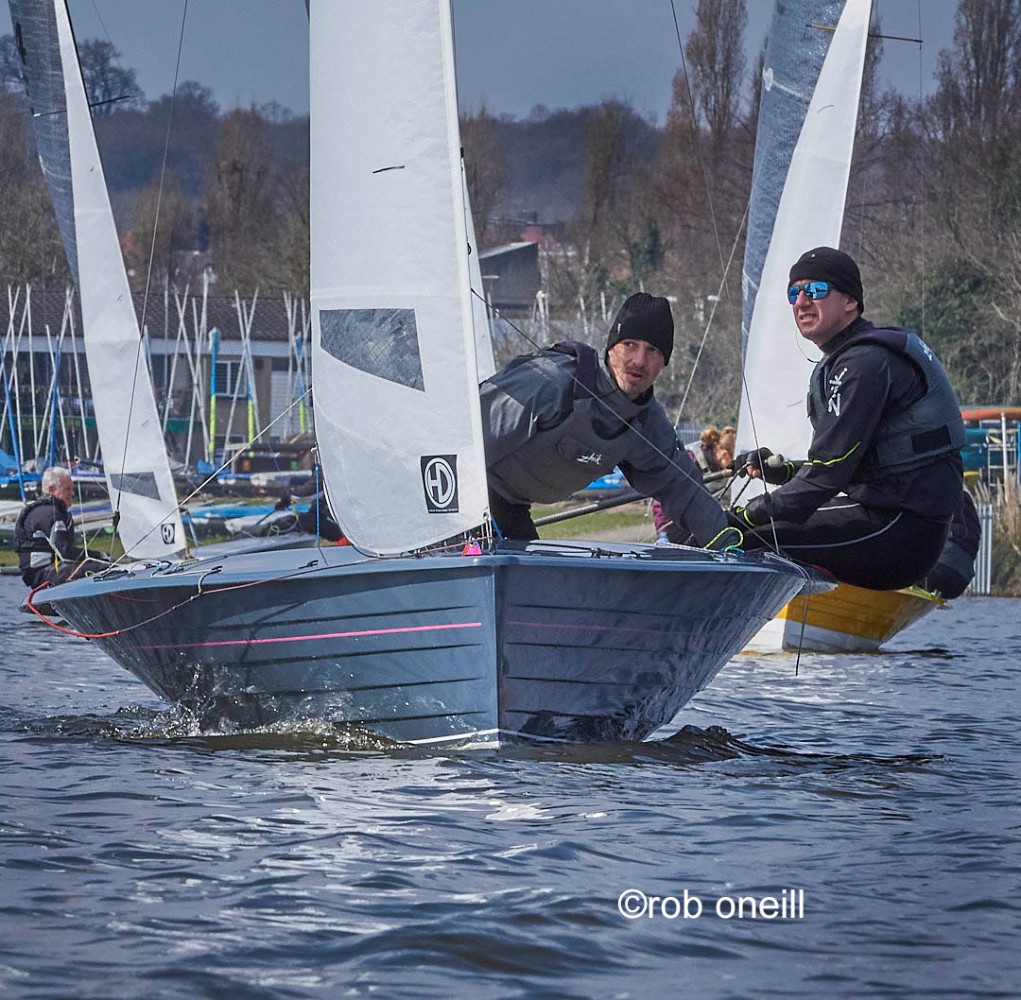 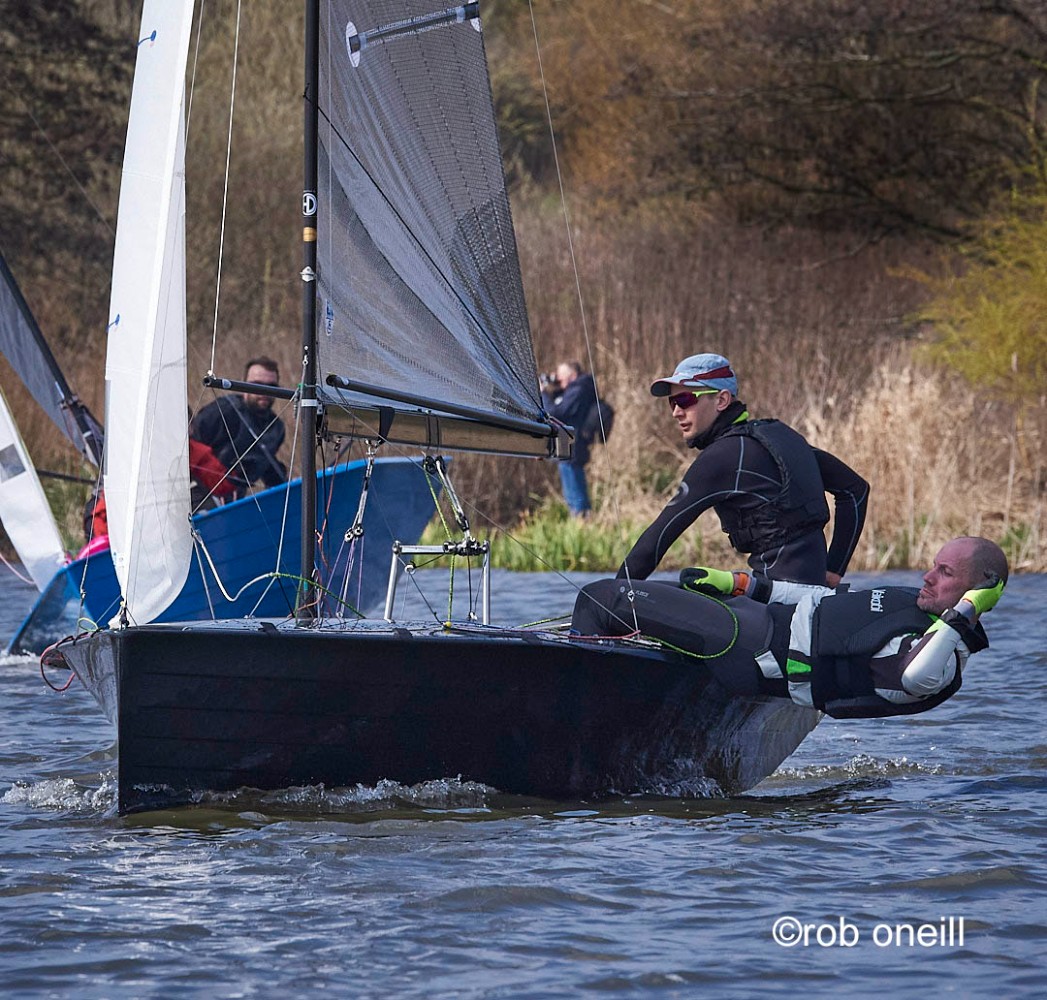 The Merlin Rocket fleet descended upon Wembley Sailing club on Sunday 20th March for the Craftinsure Silver Tiller to sunshine and a nice breeze. As is traditional with Wembley, the fleet had a warm welcome with tea & coffee, and a variety of cakes and sandwiches.

The forecast called for the wind to switch off in the early afternoon, so the fleet and the Race Officer were eager to get the racing underway whilst the conditions were good.

25 boats headed out to the first start, with 10 home boats aiming to put the visitors in their place. The relatively short start line made for a full start line, with the first race getting underway on the first attempt. The gusty conditions lead to a real snakes and ladders race, with the top six boats exchanging places around the windward-leeward course. Although put under pressure, Caroline Croft and Rob Henderson managed to secure the race win when it mattered, followed by Simon Potts and Sam Mottershead in second, holding back Tim Saxton and Mary Henderson in third.

The second race got turned around quickly and we rolled into a start sequence. All 25 boats clearly wanted a good start and were pushing hard, a little too hard, leading to a general recall. The Race Officer was having none of it and put up the black flag for the second attempt. With this deterrent, the fleet got underway cleanly and headed around the slightly adapted course. The Henderson family dominated this race, with Arthur Henderson and Livvy Bell bringing up the front, followed by Caroline and Rob, and Tim and Mary.

As soon as the Mars Bars and water was handed out, the wind decided to turn off. The majority of the fleet decided enough was enough and headed back ashore to the agreement of the race committee. Once ashore, the fleet was treated to a first-class curry before prize giving.

Harry and Annabel Steward but in a consistent performance in tricky conditions to secure the Bronze fleet win. Silver fleet was topped by Colin Brockbank and Vana Vlasaki who also came out on top of the 10 Wembley boats. Winners of the centenary prize was Stephen and Gillian Leney finishing 6th overall.  Overall, Caroline and Rob were convincing winners with a 1,2 in the tricky conditions.

Big thanks goes to Wembley sailing club for putting on a great event, with a warm welcome and great food!

Next up the Craftinsure Silver Tiller heads to Blithfield Sailing Club on Sunday 27th March. For the full list of events in 2022 visit https://www.merlinrocket.co.uk/index.asp?pg=fixtures