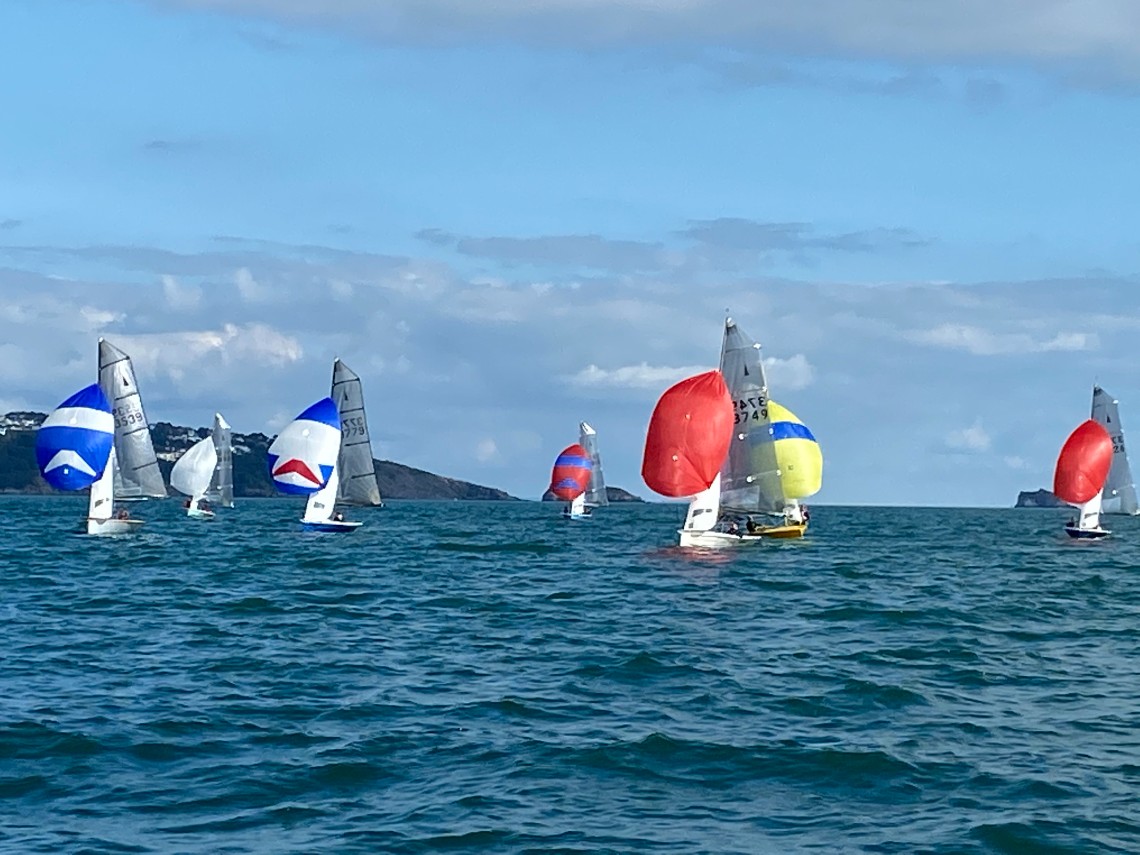 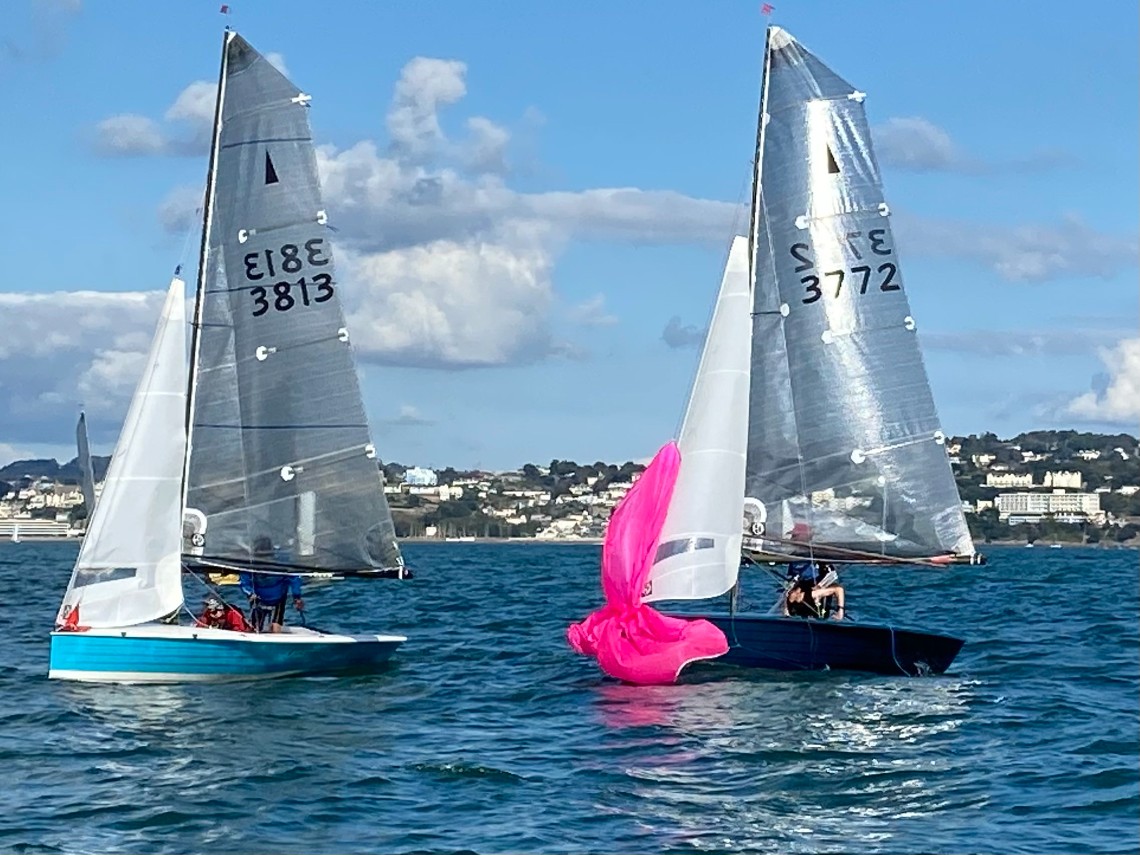 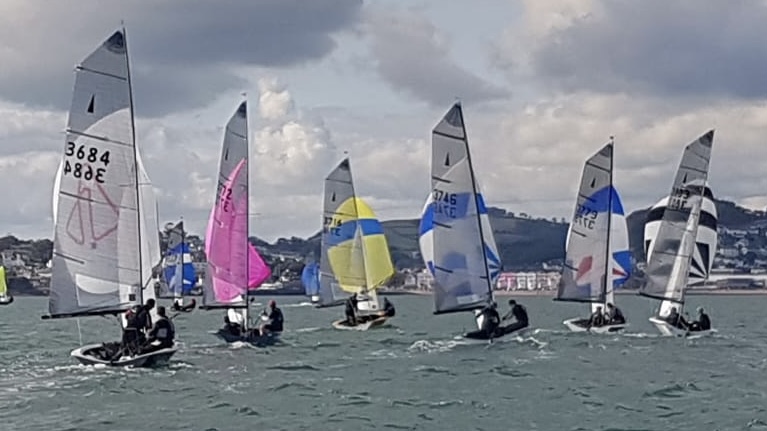 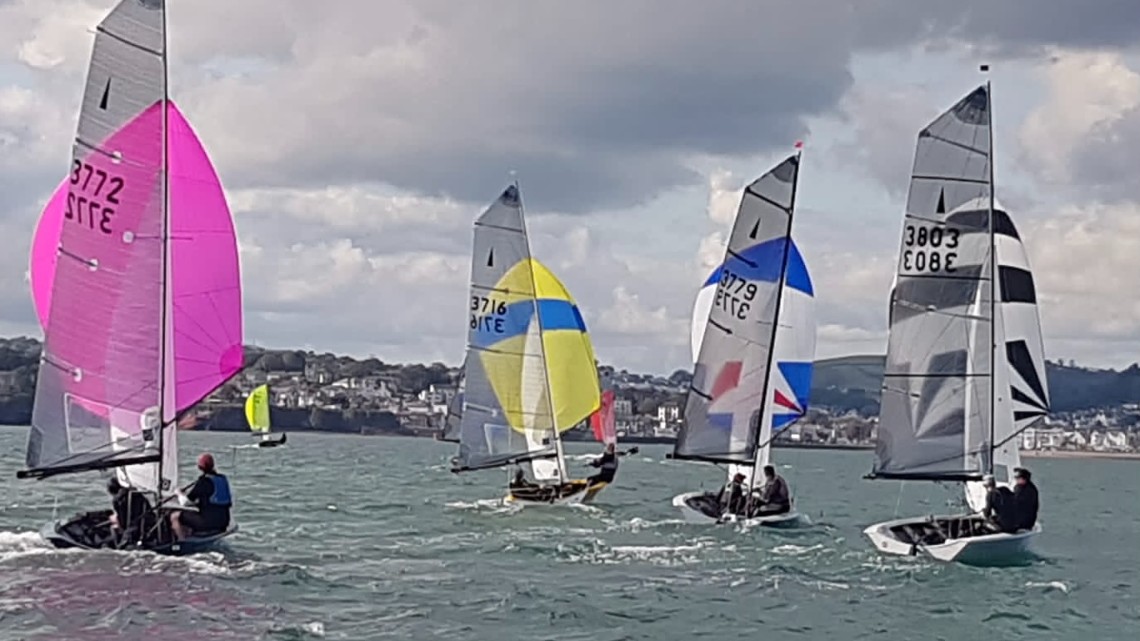 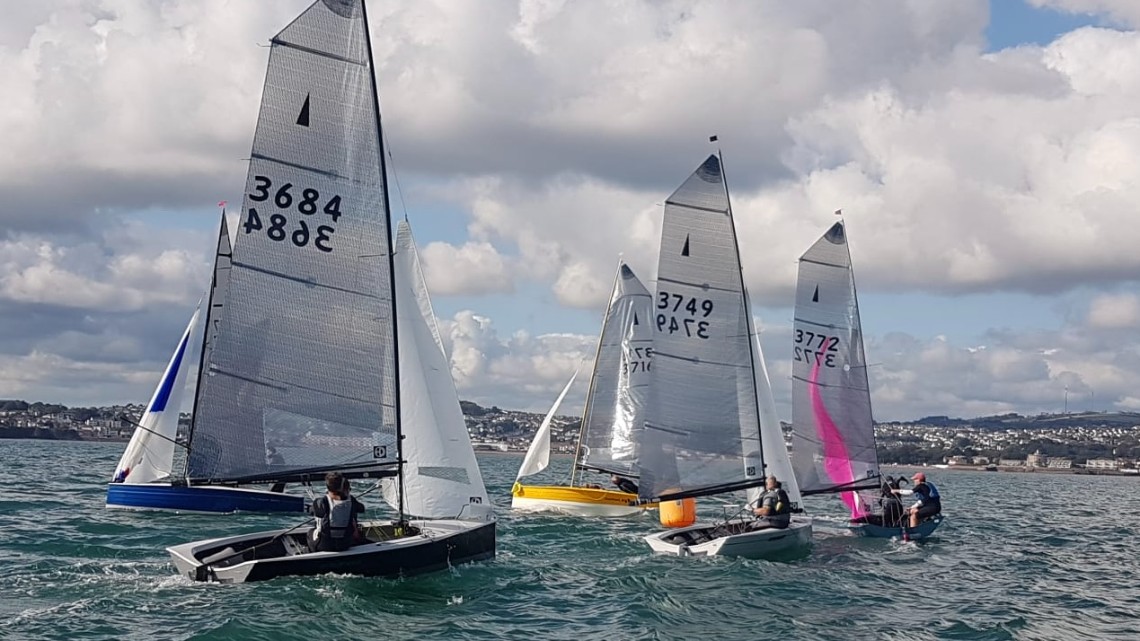 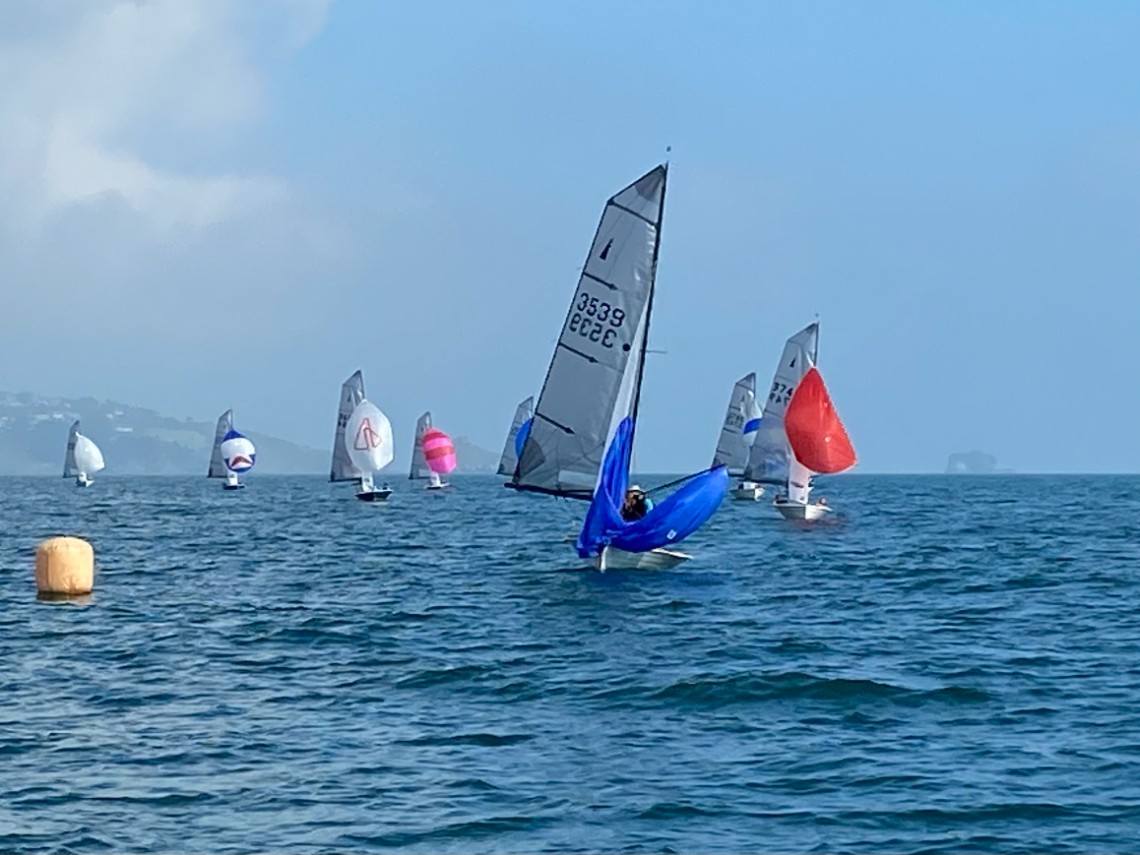 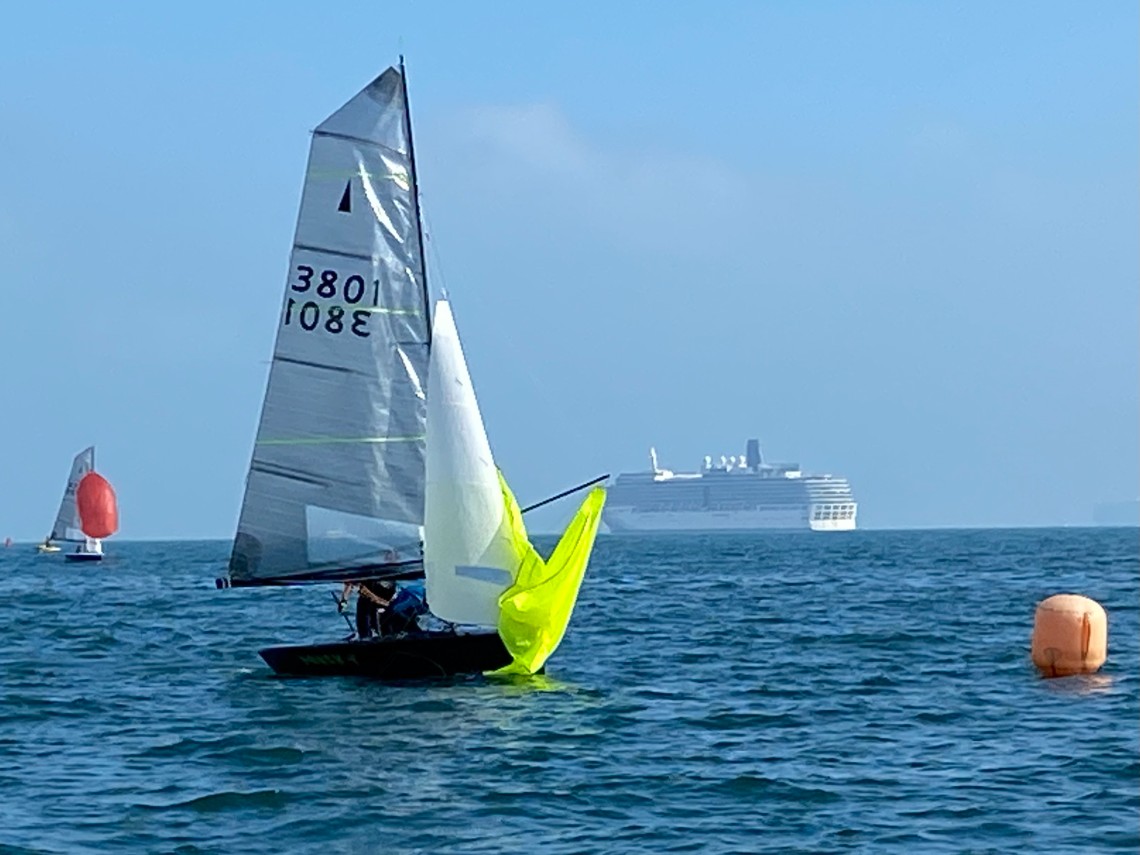 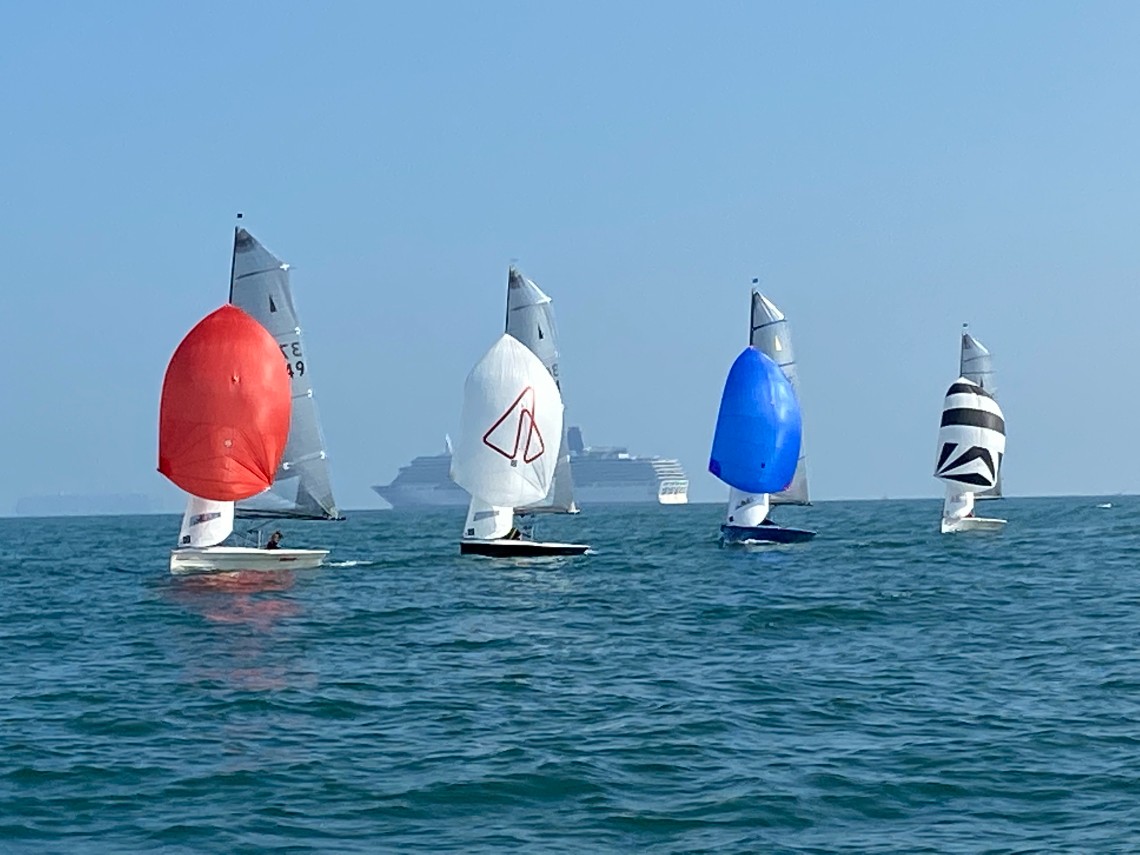 15 Merlins arrived in Paignton on 9 October for the 2 day Craftinsure Silver Tiller Open Meeting hosted by Paignton Sailing Club.  They enjoyed a very friendly reception from the club’s members, with blue skies, blue seas, warm temperatures and a lack of crowds.  The English Riviera at its best.

On arrival the only missing ingredient was wind.  We looked out over a glassy sea towards Torquay.  But lo, the water on the Torquay side of the Bay darkened and by start time a gentle 5 knots with lulls had developed and the racing got under way on schedule.  A sausage with a gate at the bottom end followed by a triangle was the course for the weekend.

In race 1 Dan Alsop and Jennie King in their beautiful wooden boat (3539) sought and found some more breeze and a shift on the left-hand side of the first beat.  They used this to good effect, establishing a lead which they held until near the pre-anti-penultimate mark when Matt Biggs and Beka Jones (3801) slipped by them to take the first of their 4 victories of the weekend.  Colin and Sean Anderson (3749) mastered the shifts to take third with Tom and Ed Low (3684) in fourth and Chis Gould and Caroline Croft (3803) in fifth.

Race 2: Again Dan and Jennie got away well on the left, but this time Mike and Jane Calvert (3691) judged the shifts to perfection and beat them round the windward mark.  The Calvert’s sailed away to what from the middle of the fleet looked like a comfortable win.  Matt and Beka made their way up to second, with Dan and Jennie finishing third and James Wells and Anna Aylward (3746) fourth.

Unfortunately, this correspondent could not stay for the supper in the Club on Saturday evening, but from the activity and smells of cooking as I left it promised to be good and I believe it did not disappoint.

On Sunday the wind was predominately from the northeast but generally clocked right, with some substantial shifts.  There was more of it than on Saturday.  Indeed, there was enough to make the perfectly set second reach of the triangle on the cusp of what was manageable with a spinnaker.  That gave the crews’ muscles a workout and created some overtaking opportunities on that leg which had been missing in Saturday’s calmer conditions.  Blue skies, seas and sunshine were still the order of the day.

In races 4 and 5 Matt and Beka stamped their authority on the fleet with two firsts.  They followed that up with a discardable second in race 6.  Almost throughout they appeared to be at risk from the Calvert’s who scored a 2, 3, 1 and occasionally from Will and Rob who scored a 3, 2, 3.  However Matt and Beka’s calm mastery of the shifts combined with good speed gave them overall success with a race to spare.  They relaxed with a second place in what for them was an optional race 6.

We packed up in the sunshine on the harbour wall; enjoyed tea, drinks and the prizegiving in the clubhouse and drove home through the stunning Devon countryside after a great open meeting.  As Matt Biggs said in his prizegiving speech: “we know how much effort it takes to run these events”.  It was fully appreciated.

Next up, the Craftinsure Silver Tiller heads to Hollingworth Lake Sailing Club on the 16th and 17th October.

Thank you Will Henderson for the report