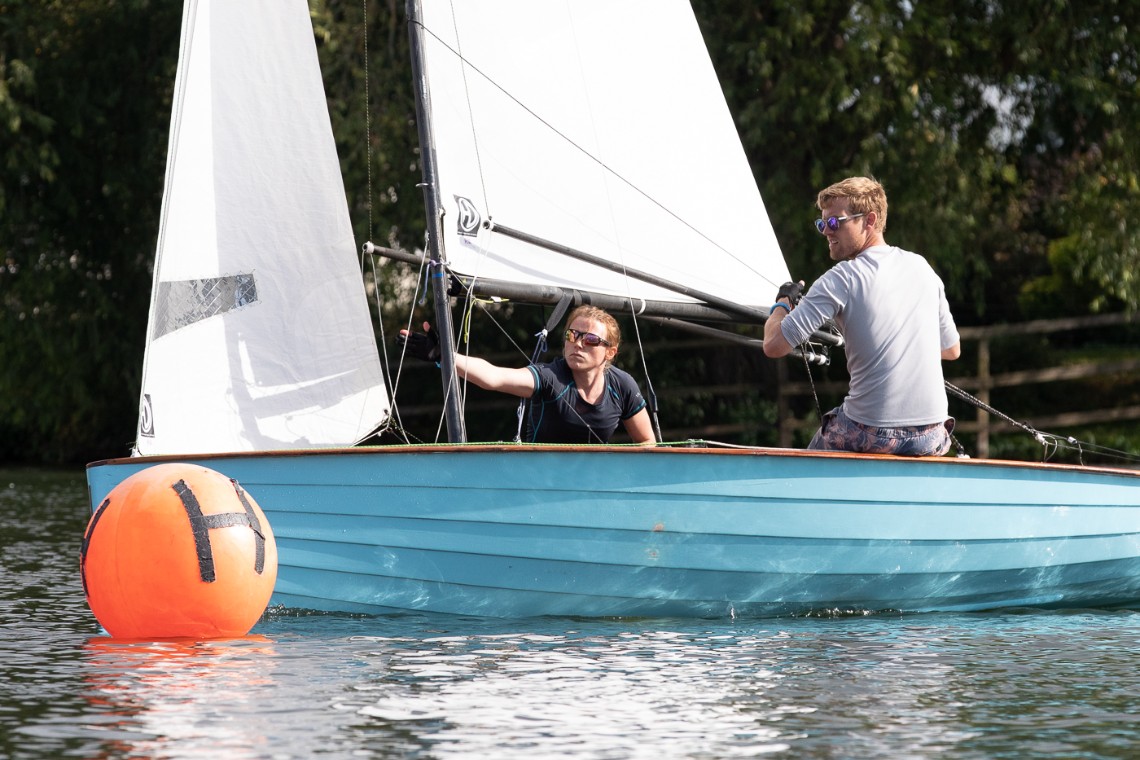 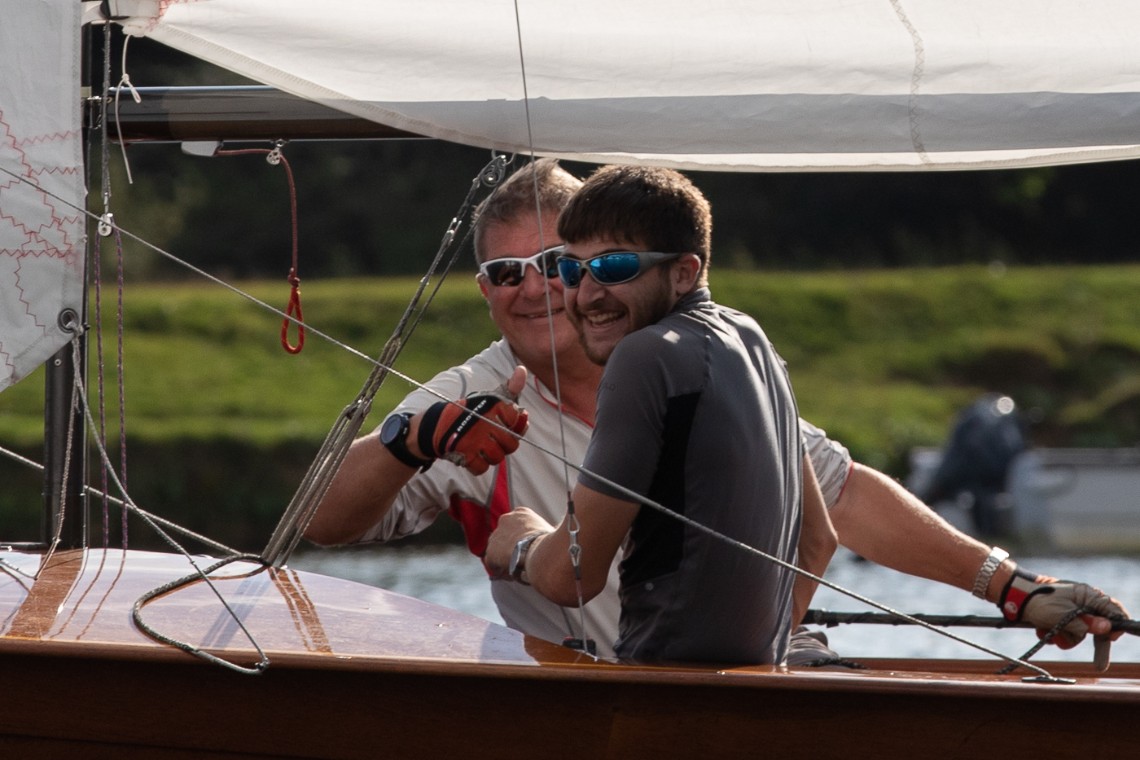 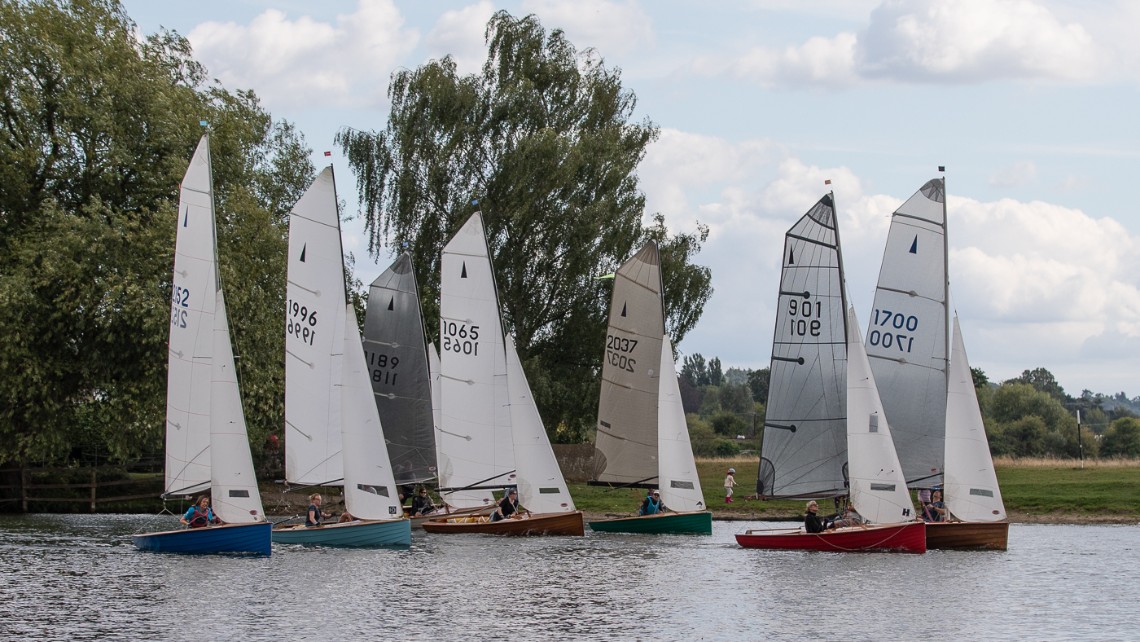 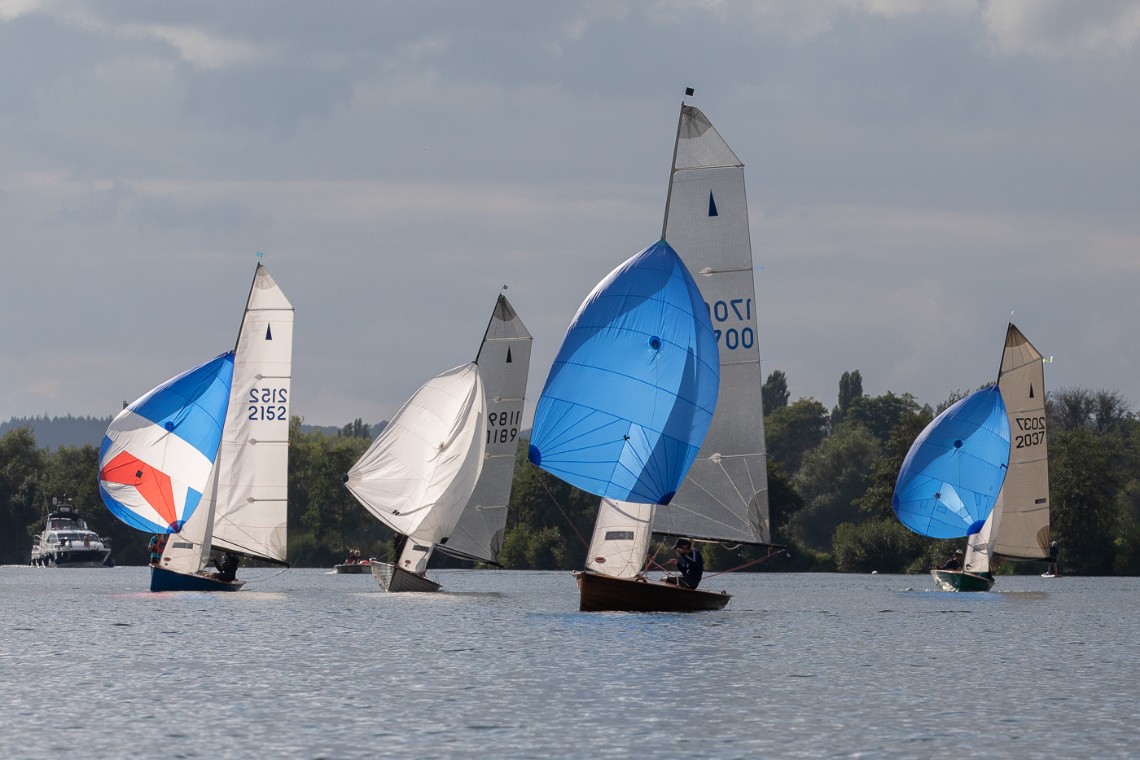 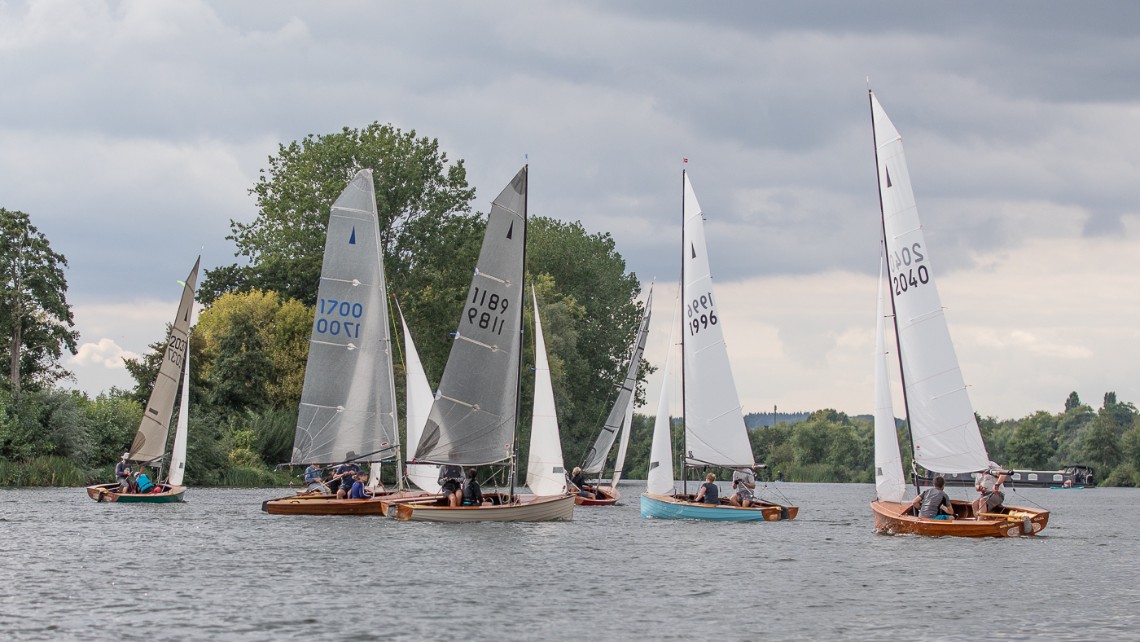 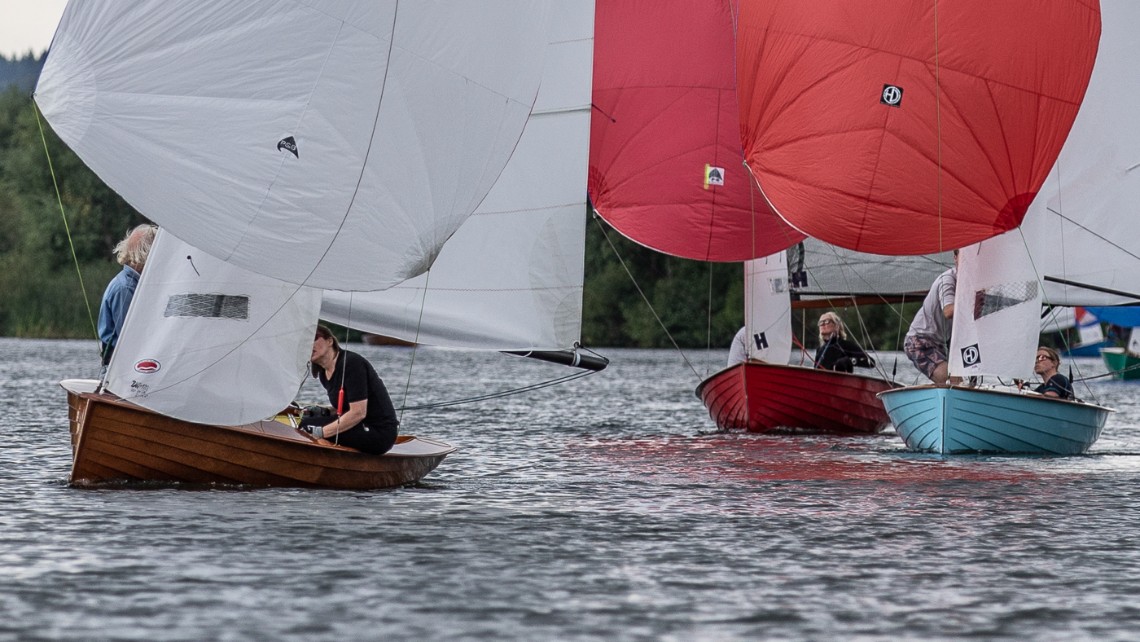 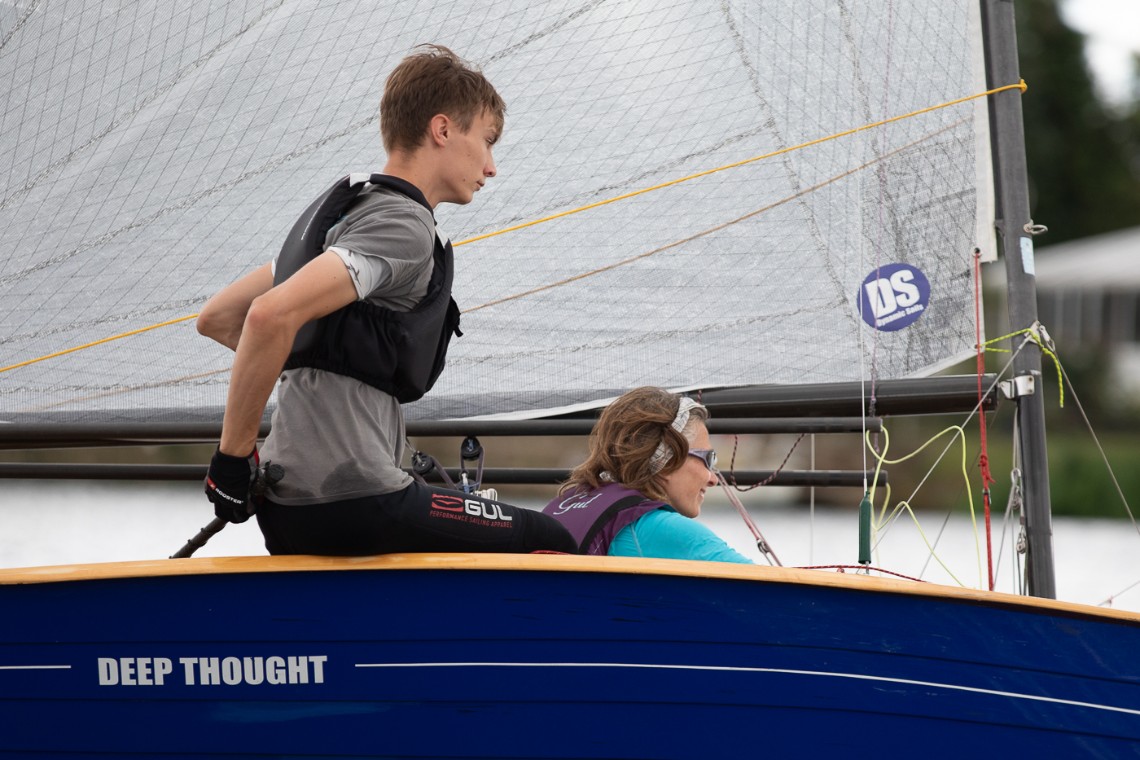 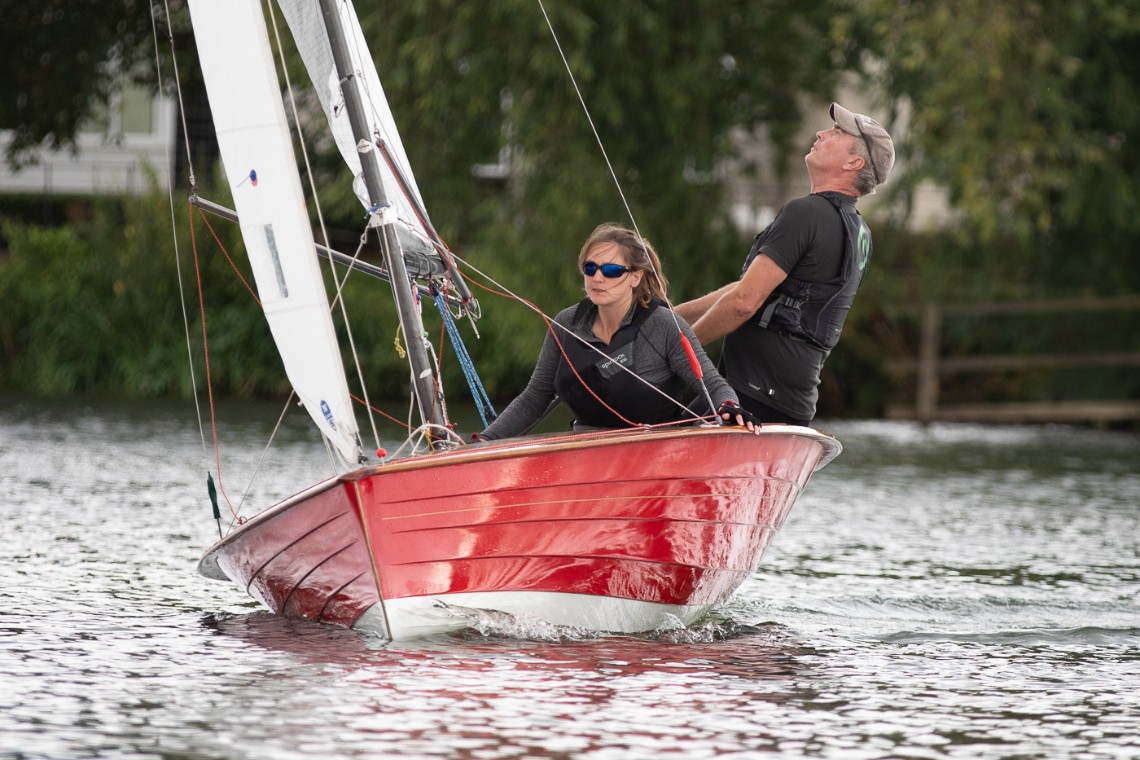 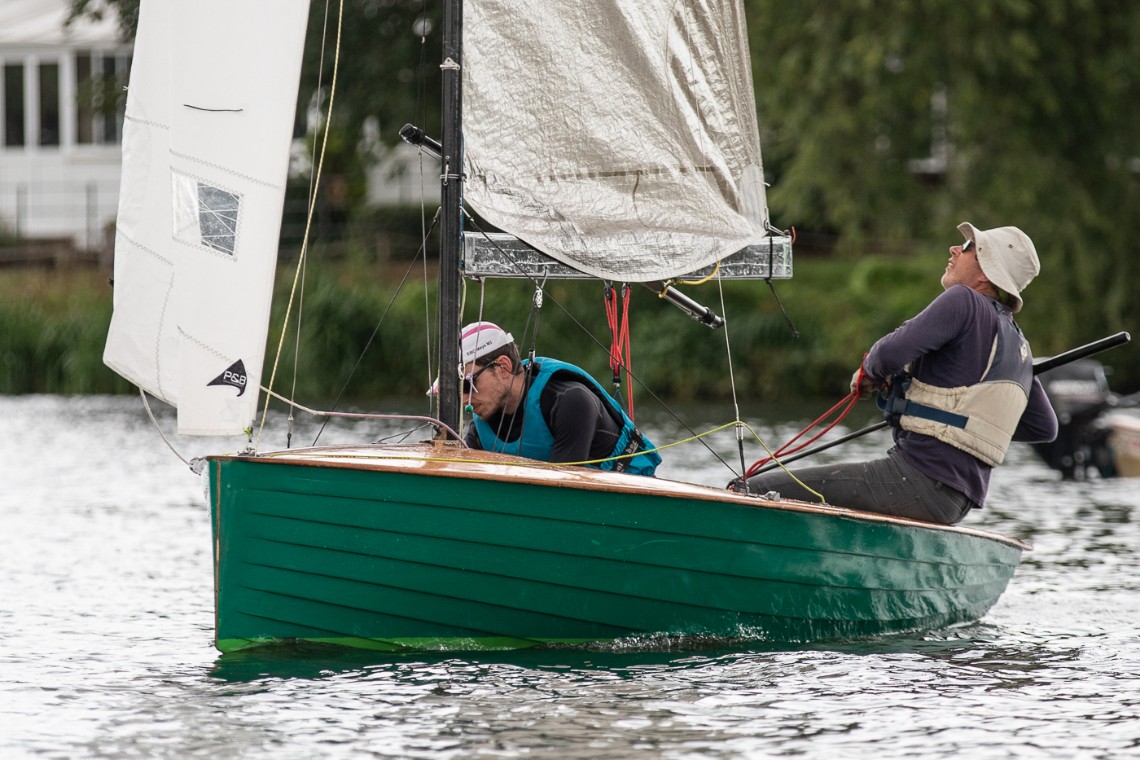 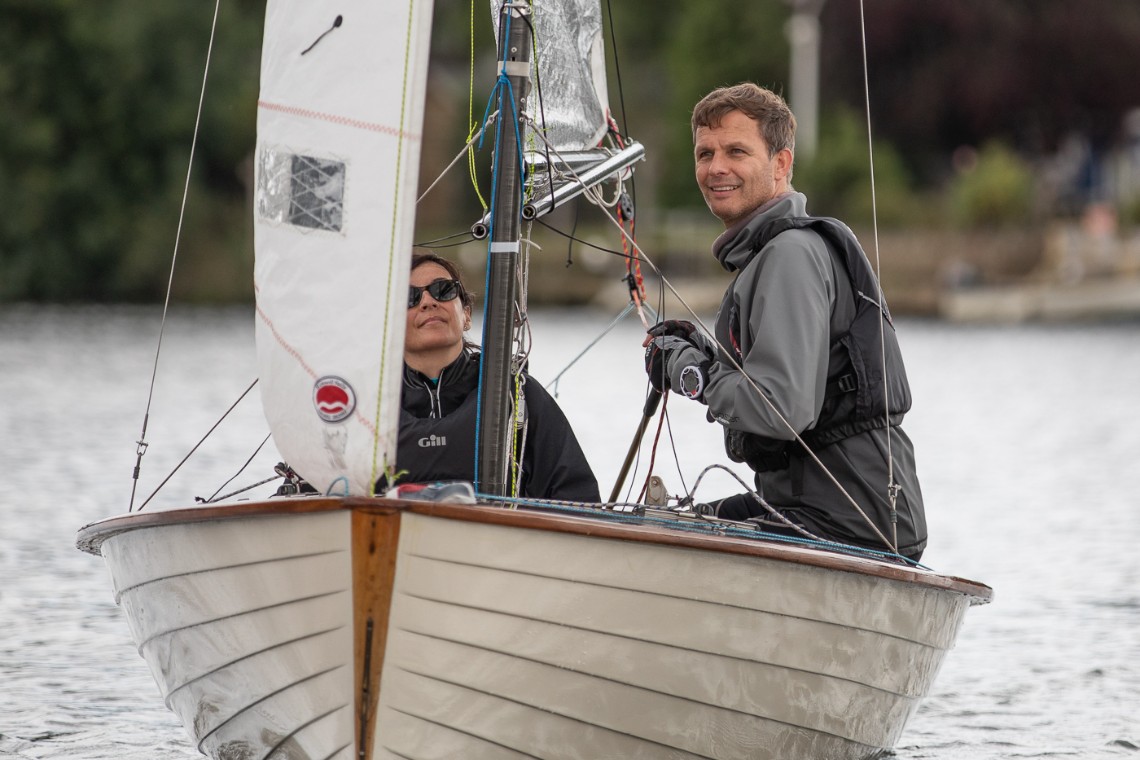 The De May Series and Thames Series are sponsored by Craftinsure.

The Merlin Rockets headed to Upper Thames for the weekend of 11 and 12 September, with the De May Vintage event scheduled for the Saturday and the Thames Series and Silver Tiller event on Sunday.

There was a good turn-out on Saturday, with 12 boats on the start line. Our Race Officer, Peter Brewer set a fairly long course to the end of Spade Oak Meadow, approximately ¾ mile upstream of the Club. With a westerly breeze this meant good sailing with a beat and a run. The favoured end of the line was the Berkshire bank, where the main contenders jostled for the windward position. On the first beat, Laurie Smart and Vanessa Pilon sailing Flipside moved ahead of Chris and Pippa Kilsby in Queen Phillipa, with Mark Addison and his son sailing Keto in third. When Mark lost his main sheet on the second lap, Pat and Jilly Blake sailing Tiersel moved into third place and the positions didn’t change for the rest of the race. Laurie Smart and Vanessa Pilon crossed the line first, closely followed by Chris and Pippa.

For the second race the breeze picked up a bit, and after the start, the Buckinghamshire bank became the favoured side of the river. Chris and Pippa led up the first beat, closely followed by Laurie and Vanessa, with Carl Mayhew and Mayra Vivo-Torres sailing Pooh, in third. On the second lap, Laurie and Vanessa retired from the race, and Miles and Susan Palmer sailing Dypsomania moved into third place. The positions didn’t change on the final lap, and the race was won by Chris and Pippa Kilsby.

The third race, in the afternoon, was also a cup-race for the Spade Oak Bowl. Laurie Smart, now crewed by Nicola Scaddan, set a good lead, but the breeze became fluky and he was caught by Chris and Pippa Kilsby on the second lap, who pulled ahead and eventually won the race. Pat and Jilly Blake stayed in third place for the duration of the five-lap race. There were plenty of other battles further down the fleet, which made for an entertaining day’s sailing.

The weather on Sunday dawned bright and sunny, but sadly with no wind. After two postponements, racing was abandoned for the day. Everyone spent an enjoyable morning in the sunshine, examining and discussing the set-up of other people’s boats, and after a good lunch and a few drinks in the bar, headed home.