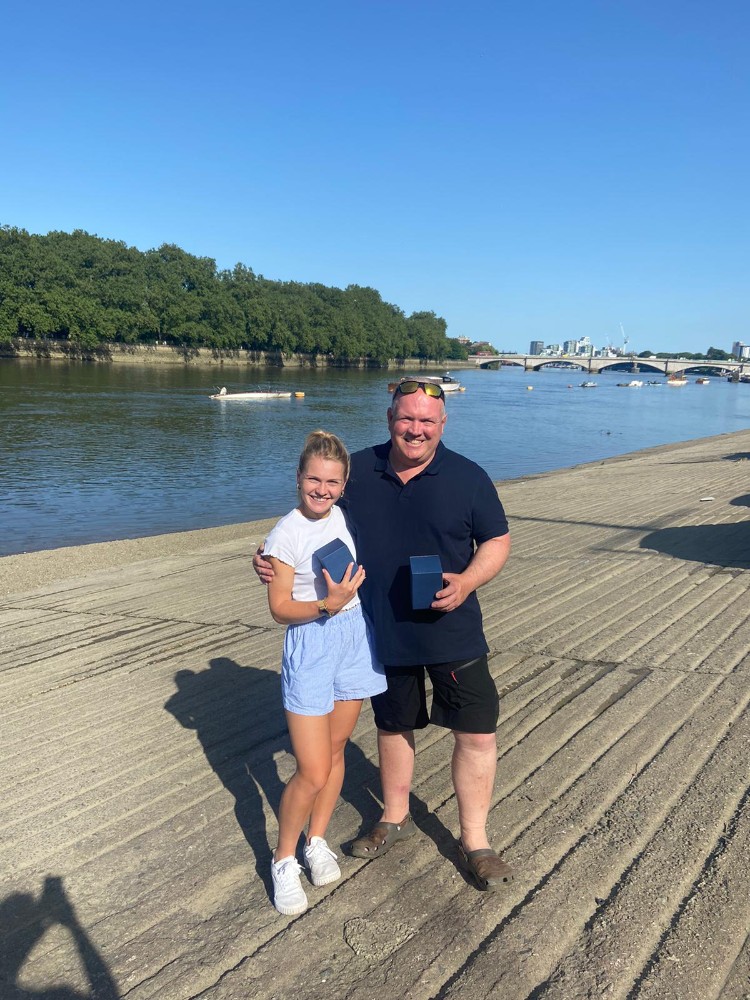 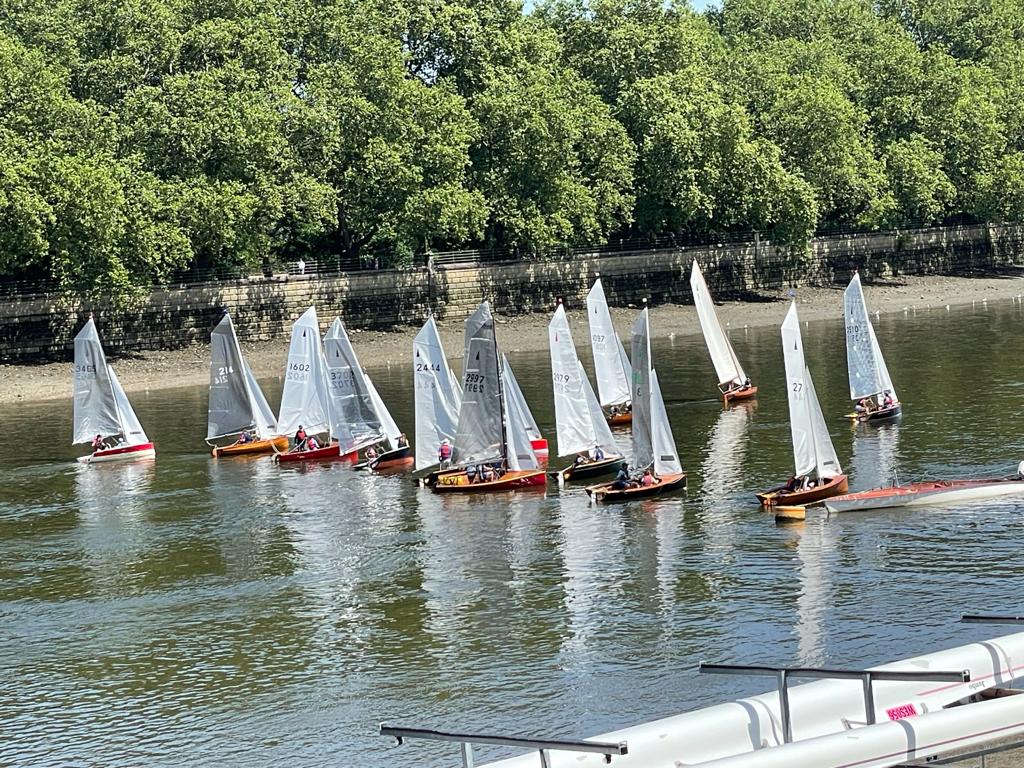 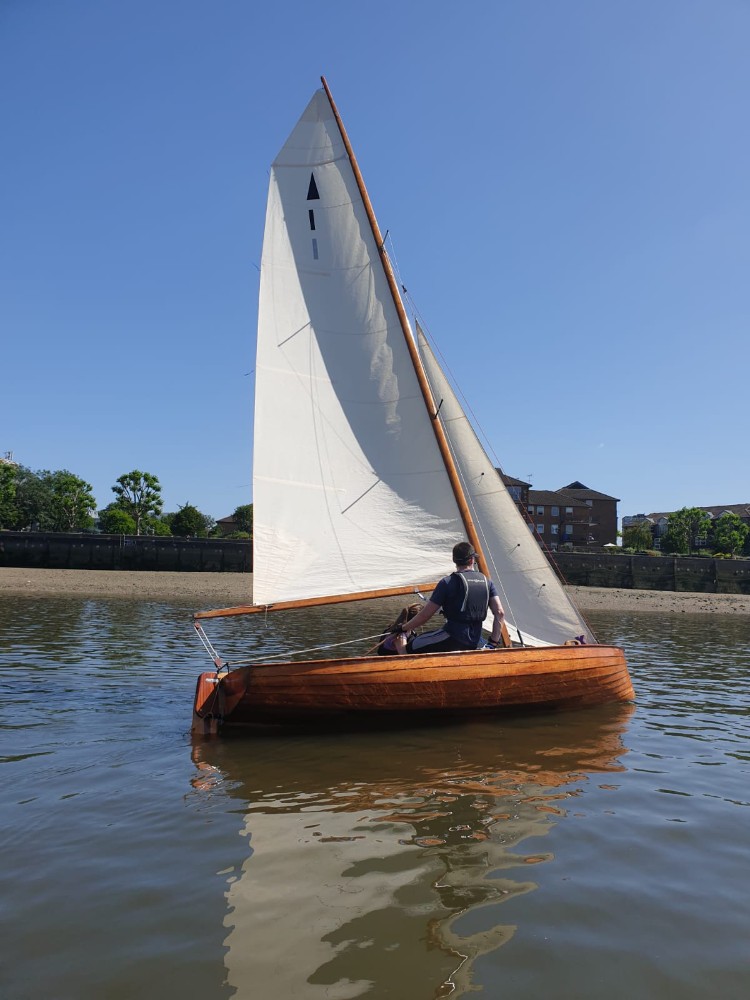 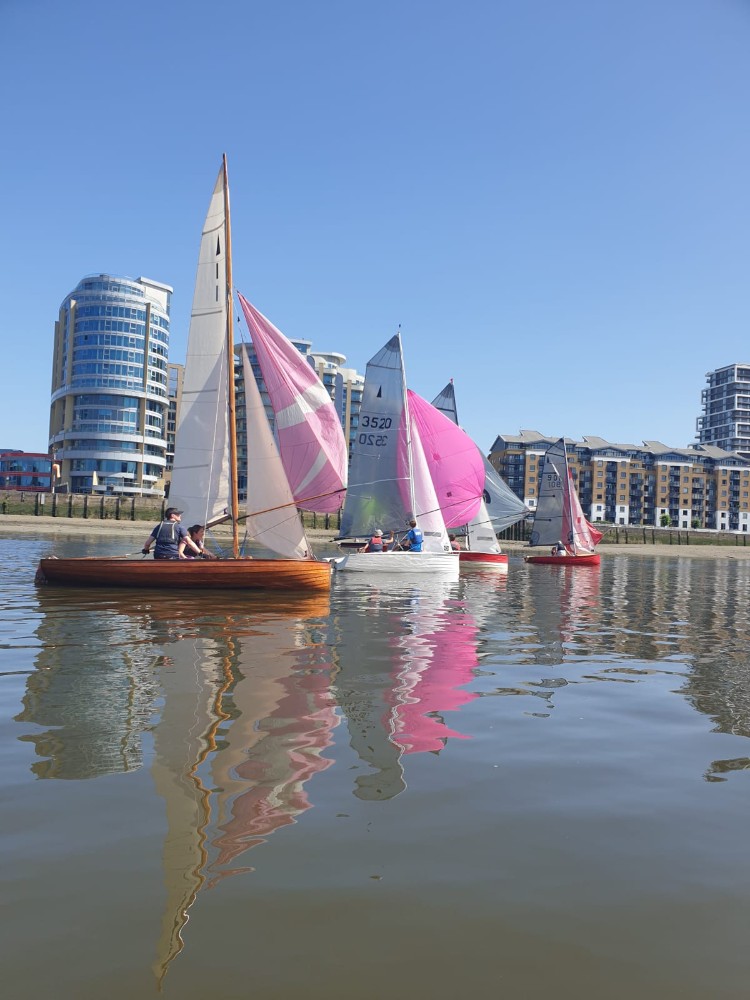 Saturday, the 17th of July 2021 saw the annual running of the Ranelagh Sailing Club down river race for Merlins. 16 competitors turned out on a glorious (if slightly windless) sunny day. The carnival atmosphere on the Putney embankment with pop-up eateries flying flags and milling sailors and rowers was something to behold.

The format of this race, which is one of the highlights of the Merlin Thames Series, is a race from Putney on the ebbing tide down to Battersea with one turning mark and then back to Putney on the flood.

Probably as a result of the warning during the briefing of the dire consequences of being over the line there was a clean start with Merlin number one Kate sailed by Arthur Henderson and Livvy Bell,  together with Flinkidink 1097 sailed by Stuart and Imogen Jenkins making the early running.

After some place changing under Putney road and railway bridges the order settled down to Stuart and Imogen chased by Duncan and Harriet Salmon in 3702. Stuart and Imogen gauged the current and shifting winds expertly, to pull out commanding lead leaving Duncan and Harriet fighting off a fast catching up Arthur and Livvy by the turning mark, which had been dropped by the pavilion in the adjacent Battersea Park.

Stuart and Imogen promptly sailed off into the distance never to be challenged again.

Following a close spinnaker run the Salmons drew ahead of Arthur and Livvy having split to go on the southern bank of the river at Lambeth Bridge. What appeared to be a comfortable second place however soon evaporated when the majority of the rest of the fleet came up the river line abreast on a breeze all flying their spinnakers. There ensued a lengthy battle between seven or eight boats any of which could have taken the second, third and fourth places. For a while Pat and Jilly Blake in 901 and Tim Metcalf and Matty Key in 3520 looked like they had taken those positions but Christian and Gabriel Hill in 2997 did a great job in calling the gybes and pulled out into second place with Duncan and Harriet somehow managing to sniggle their way back into third. Arthur and Livvy extricated themselves from the melee to come a creditable fourth in the oldest boat in the national fleet.

The members of Ranelagh Sailing Club organised a barbecue, salads and large tubs of cold drinks for a most enjoyable late lunch on the embankment. A wonderful afternoon messing about on the river (with some brilliant racing as well)!