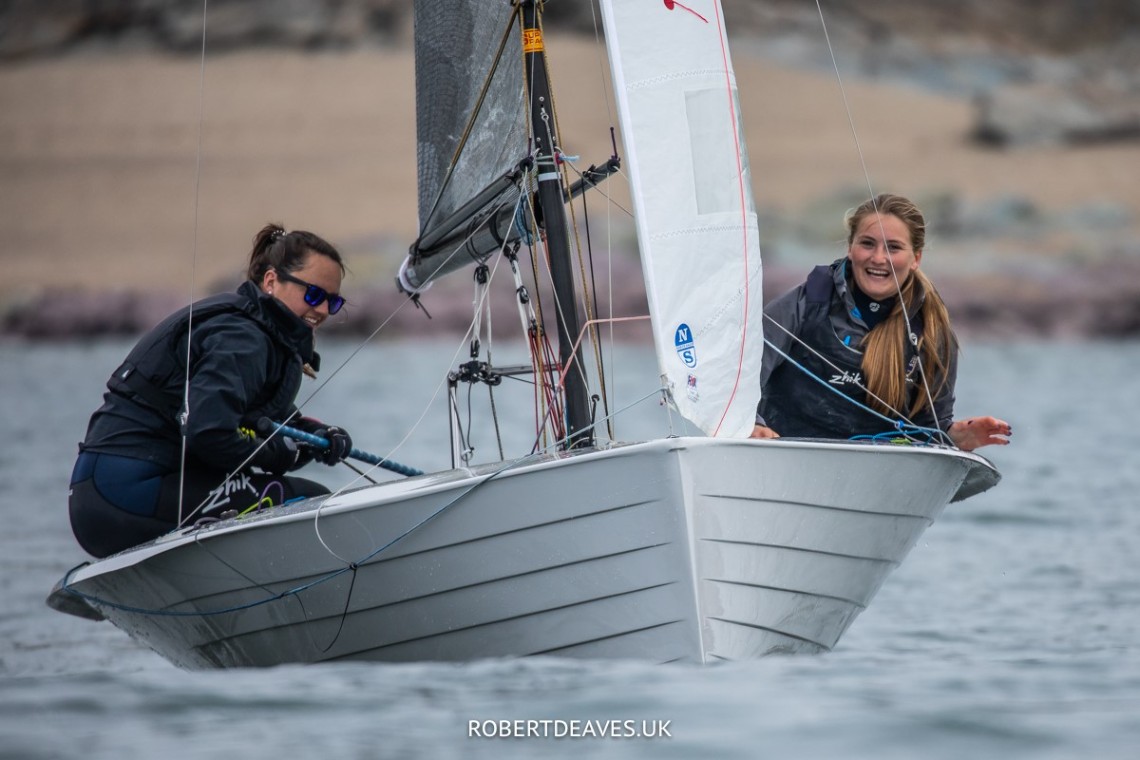 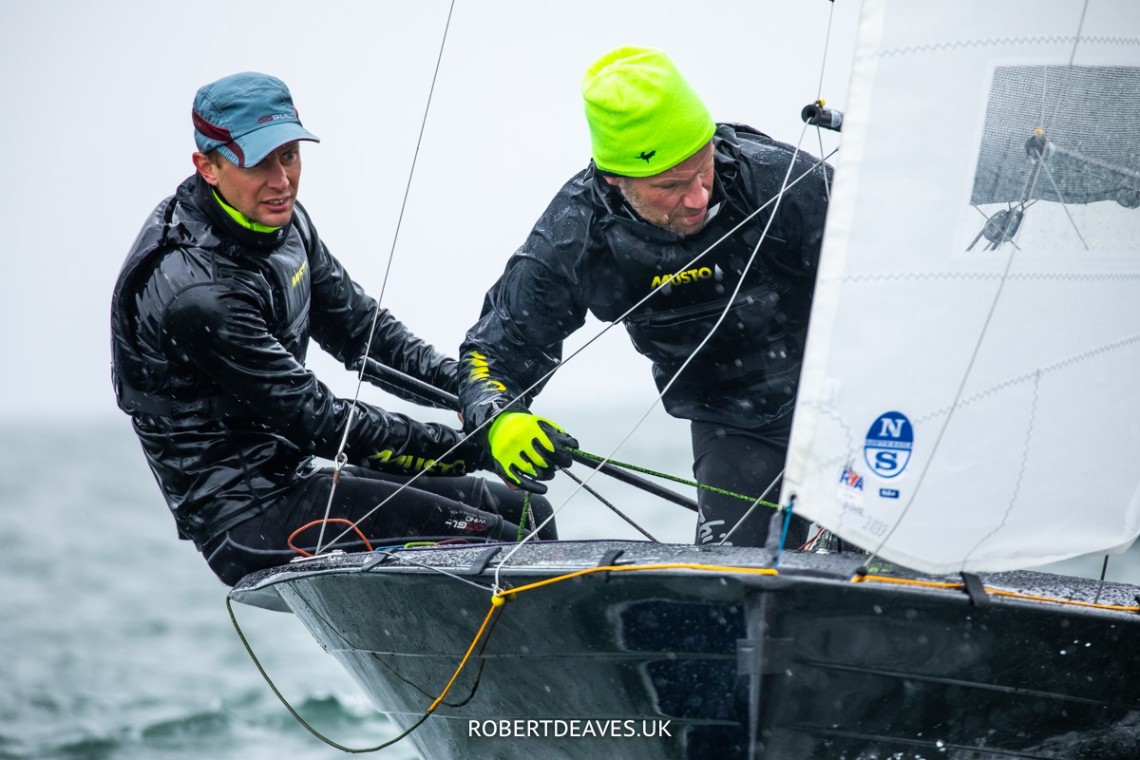 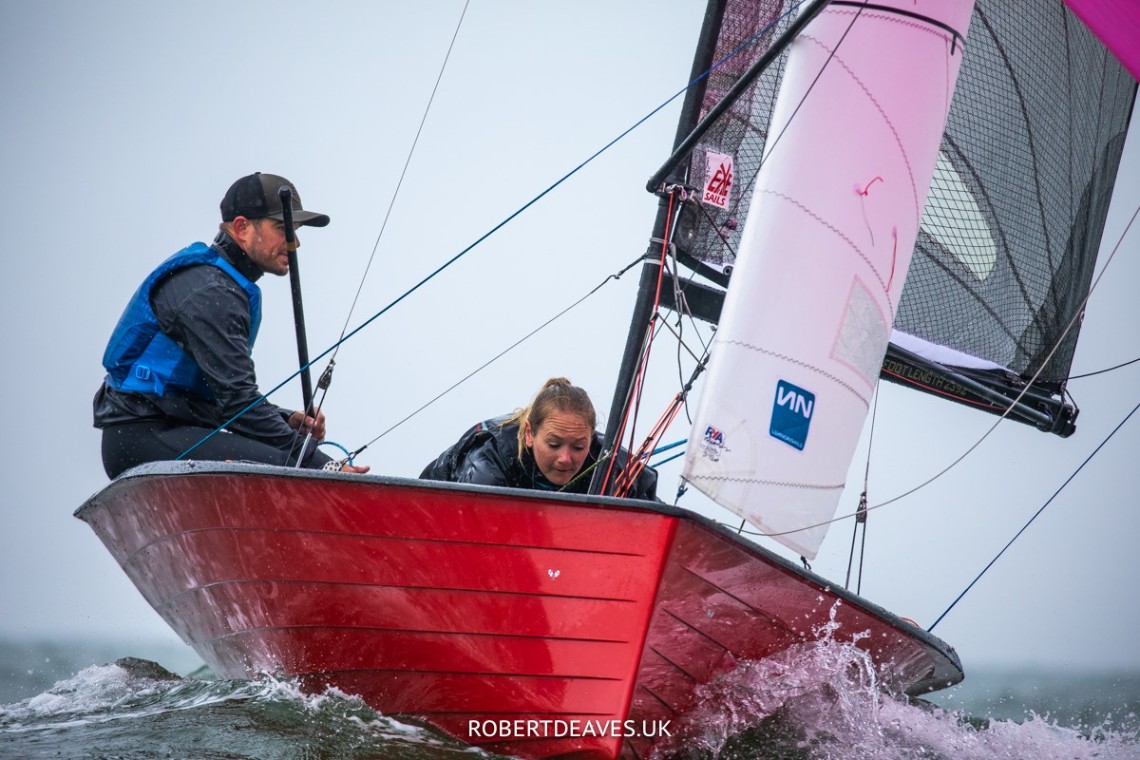 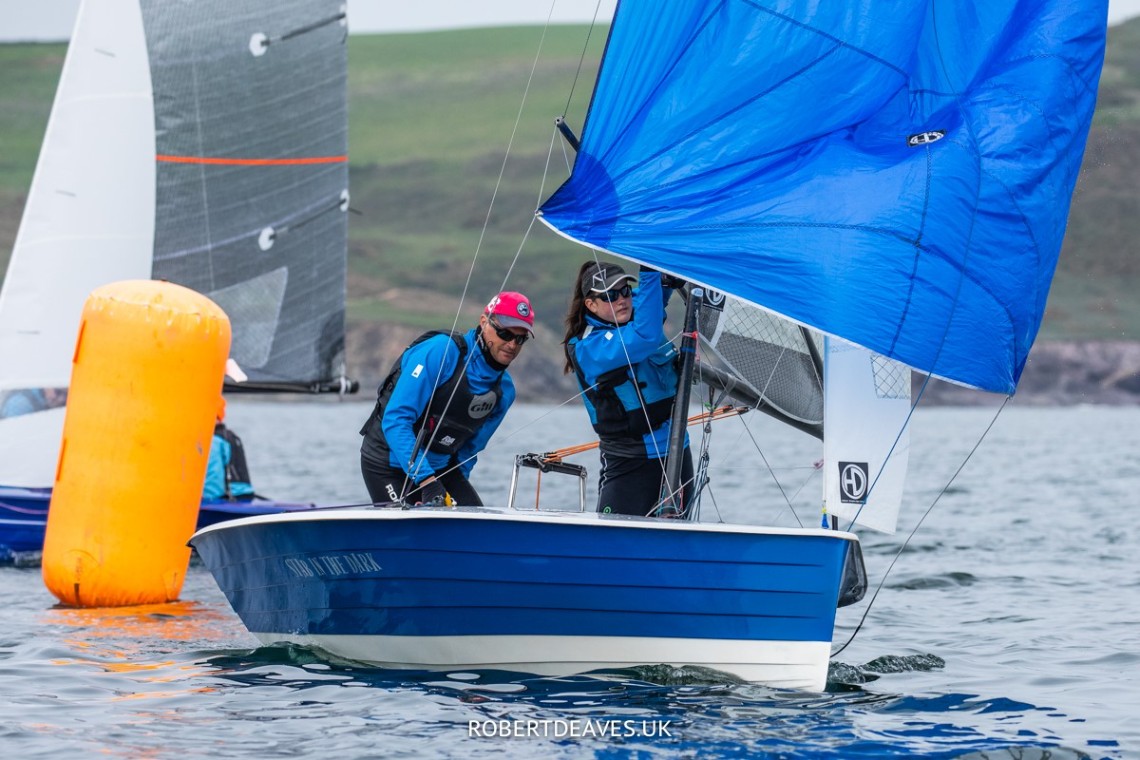 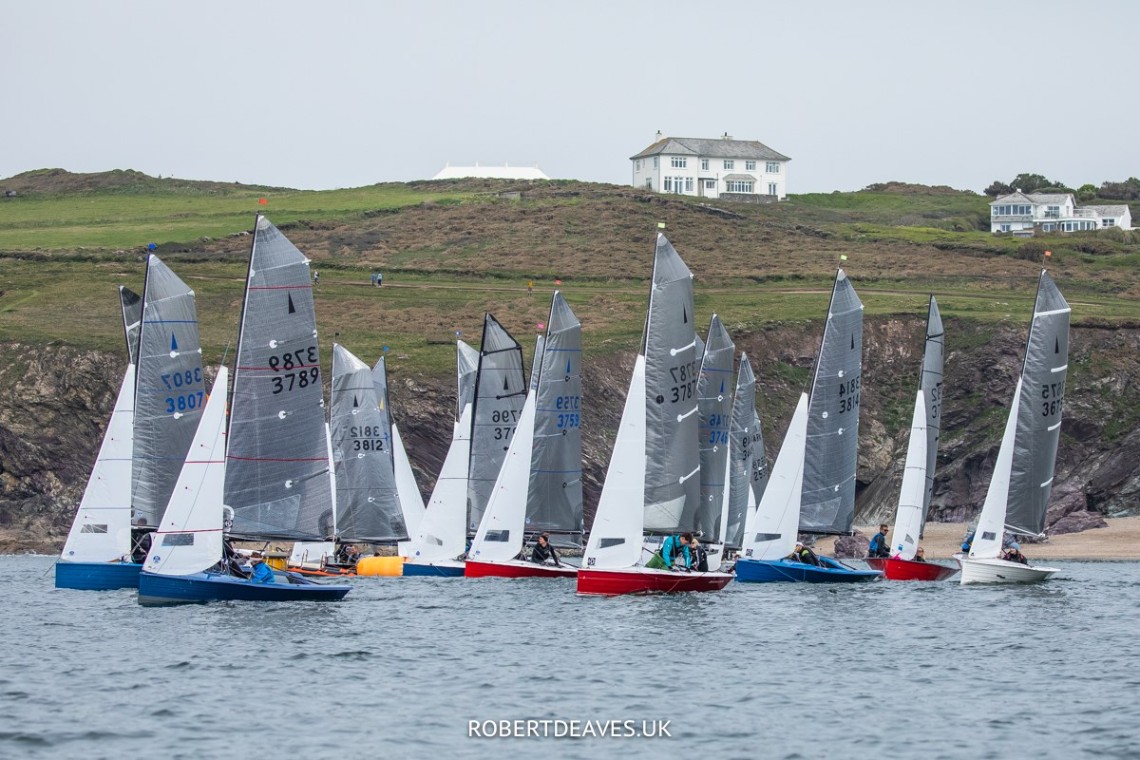 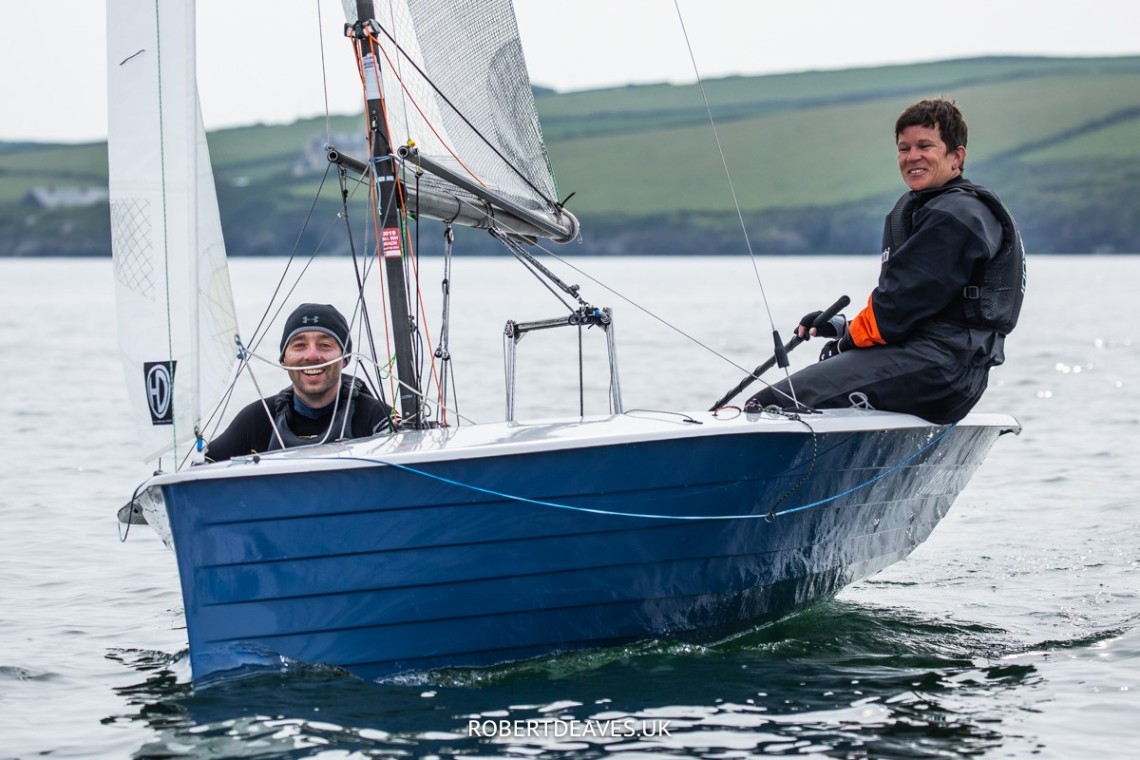 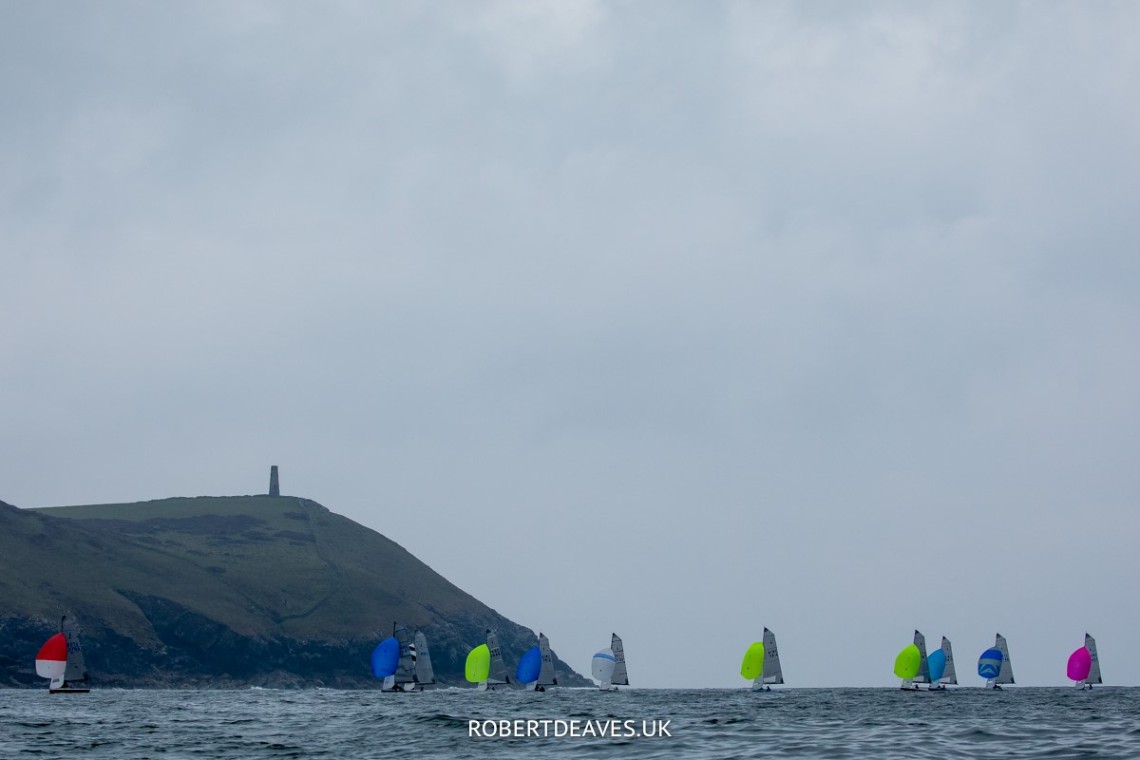 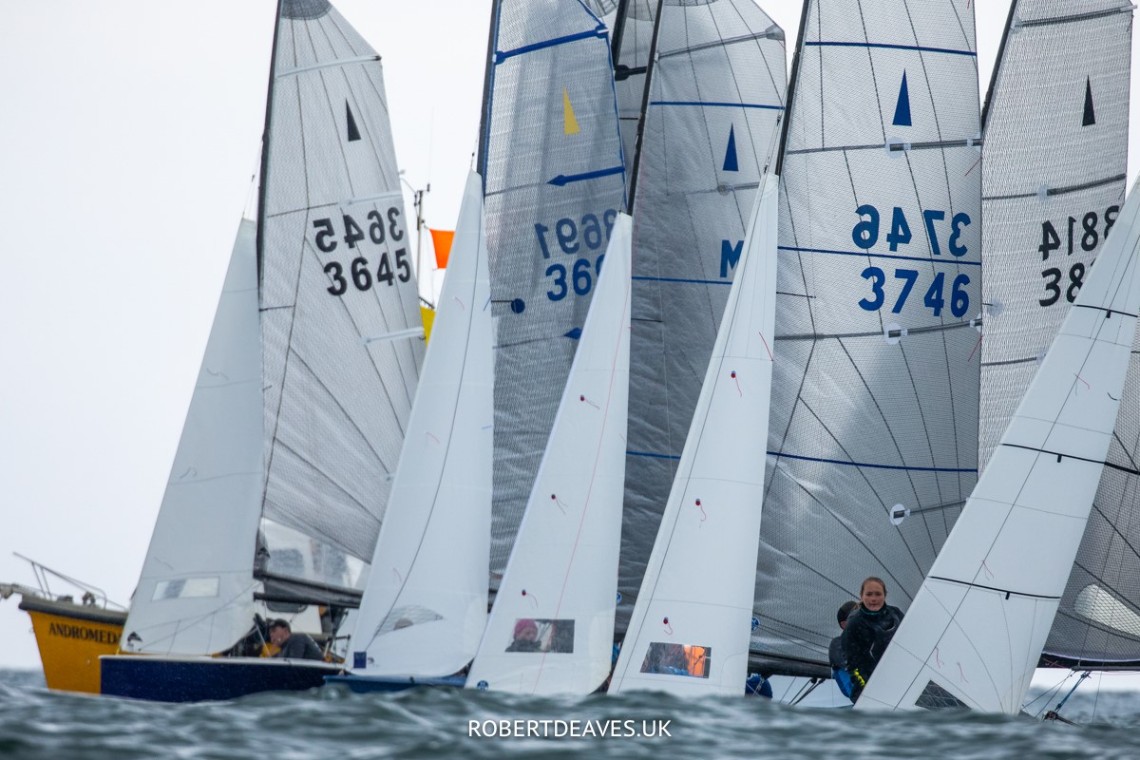 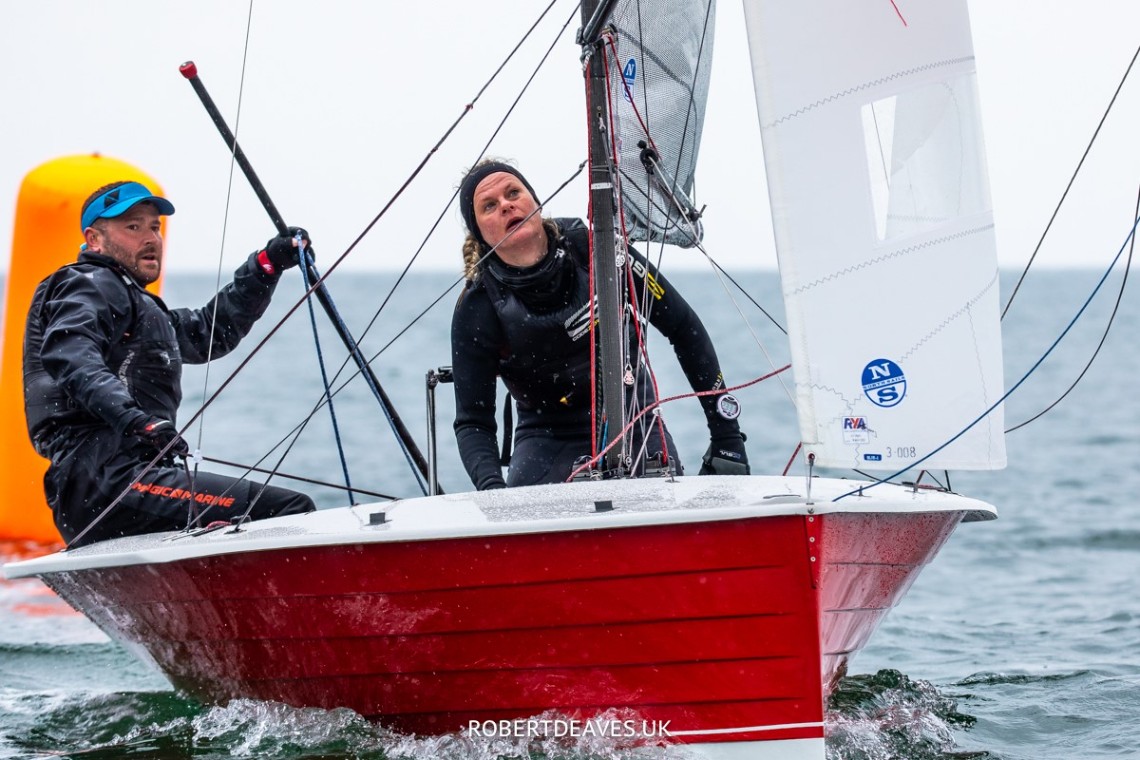 Seventeen Merlin Rockets made the long journey down to Rock for the May bank holiday even with a poor weather forecast for the inaugural Craftinsure Silver Tiller at Rock Sailing & Waterski Club. Those who had travelled down on Friday night were welcomed with a lie in on Saturday morning as briefing wasn’t until 1pm and the first race not before 3pm. As the fleet launched, there was major déjà vu as we were all fighting the tide and tacking up the shore. A few sailors decided it would be quicker to walk the boats out of the estuary for 2km rather than battling the tide and fighting for the inside lane around the sandbanks.

Racing was held out in Padstow Bay at the mouth of the Camel Estuary. Only one race was held on Saturday with a dropping wind strength. With the start being extremely tidal, pushing the fleet down from the committee boat, being on the line going forward was key! Several front runners miss judged the gap that they were hoping was going to appear at the committee boat and ended up bailing. Steve Hall and Simon Haighton nailed the start and managed to tack onto port and cross the fleet leading us all out to the right-hand side under the cliffs an out of some of the tide. With the wind coming round Pentire Point there were a handful of shifts to pick and Tom Gillard and Rachael Gray making the most of them rounding the windward mark first, followed by the rest of the pack. The second beat also had some challenging shifts and those opting for clear air over the right shift made losses. Finishing off the triangle sausage course, Tom and Rachael took the first bullet of the weekend followed by Steve and Simon, in third place Mike and Jane Calvert, fourth Tim Saxton and Beka Jones and fifth place William and Alex Warren. With the wind dropping and it getting late in the day, the fleet sailed for home and enjoyed dinner at the club in the evening.

Sunday dawned to constant rain and a grey feeling. The fleet launched at 10.30 and headed out to sea with the tide under them. With the wind swinging round to a south westerly direction, we had a different racecourse altogether compared to the day before. The windward mark was near to Stepper Point and the reach mark at the entrance to the camel estuary with the start line in Hayle Bay. The racecourse provided some tricky conditions with a relatively big swell and strong tide doing different things at different marks and a light wind where most crews were just up to windward but not sat on the side for most of the day. The first race got away with only one or two boats over the line. In very shifty conditions and odd wave combinations, it was hard to keep the boats moving. Tom and Rachael nailed the first beat and lead all the way to the finish with Caroline Croft and Faye Chatterton trying to chase them down in second. The race for the rest of the fleet was extremely tight, I think I saw third place change four times in the matter of three legs. However, James Goss and Chris White took third, fourth was William and Alex and fifth Steve and Simon.

Race 3 saw a very similar turn out for Tom and Rachael as they had the most boat speed all weekend and pretty much lead race 3 from start to finish. However the racing from second onwards was tightly fought. Chris Gould and Rob Allen found a fast route through the fleet and took second followed by Mike and Jane, Tim and Beka in fourth and Steve and Simon fifth. As you might start to gather, the fleet from second to sixth was changing all the time. Race 4 saw another stella performance from Tom and Rachael who led from start to finish building up an impressive lead. William and Alex were best of the rest in second and a tight battle was forming for the next bunch of boats and who would take third. Chris and Rob sneaked past Caroline and Faye on the last beat to take second and the girls took fourth. Mike and Jane rounded out the top five.

For most of us we thought the day was over, however we soon realised after the third race on Sunday that we had another two as we had to wait for enough water to sail back in the Camel Estuary. The constant rain was a bit miserable but with some crews taking out enough food, the fleet managed to fit in two more races without getting too cold. At one point, Sophie Mackley and James Ward decided to go and have a look at the surfers who were getting closer and closer to the racecourse with some pretty big waves hitting the shore. Soon enough they thought best not to get any closer and headed back to start race 5.

Race 5 got underway cleanly, and the wind had started to shift round to the right with the forecasted westerly. The tide was also slackening/changing at different areas of the course. Tom and Rachael were building the perfect scorecard as they took the lead from start to finish. Mike and Jane had emptied their bow tank (that was full of water) and found their speed in the light winds to take second followed by James and Chris. Fourth was Caroline and Faye and Chris Martin and John Tailby rounded off the top five.

Race 6 was starting to see some cold and tired sailors however the fleet started cleanly and were getting used to the weird conditions. Tom and Rachael lead from start to finish again with Mike and Jane trying to hunt them down. James Wells and Anna Aylward showed their talent after being promoted to gold fleet this year managing to keep Caroline and Faye behind as they took third place. Caroline and Faye finished in fourth after not managing to find a way around James and Anna. William and Alex rounded out the top five for race 6.

Congratulations to Tom Gillard and Rachael Gray for the perfect scorecard over the weekend with six bullets. Mike and Jane claimed second place with Caroline and Faye taking third. Winning the silver fleet was Ed Chapman and Hannah Peters who are newcomers to the class! And winning the bronze fleet was Simon Hardiman and Millie Hardiman. A big thank you to Rock Sailing & Waterski Club for hosting our Silver Tiller event and the Larks for sharing the weekend with us.

Next up on the Craftinsure Silver Tiller is Whitstable Sailing Club on the 14th and 15th May.

Thank you Caroline Croft for the report