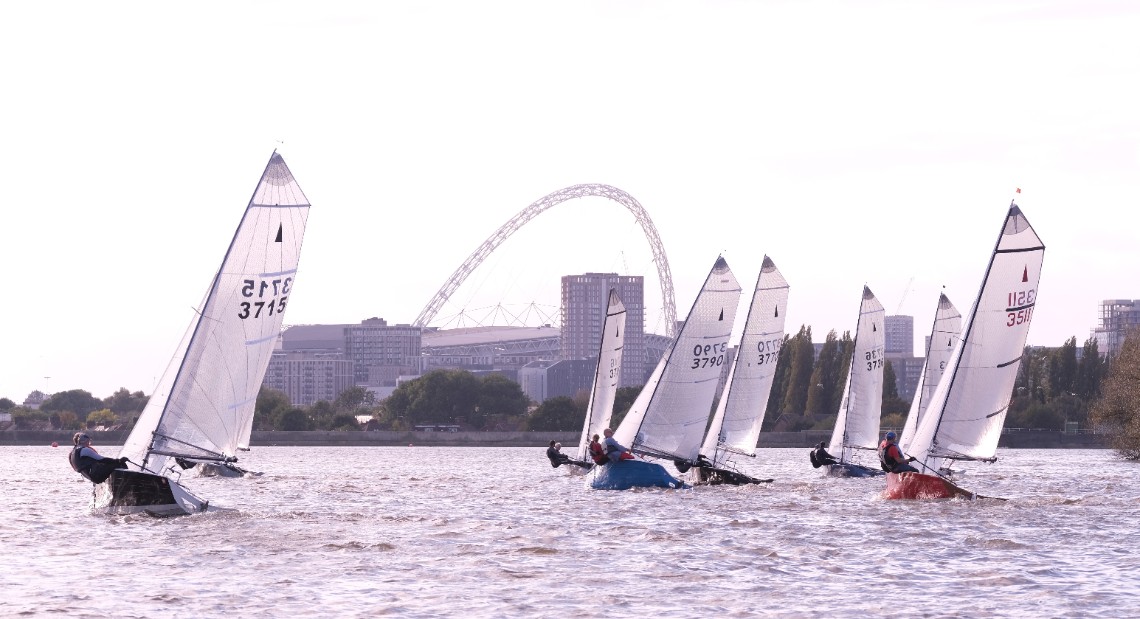 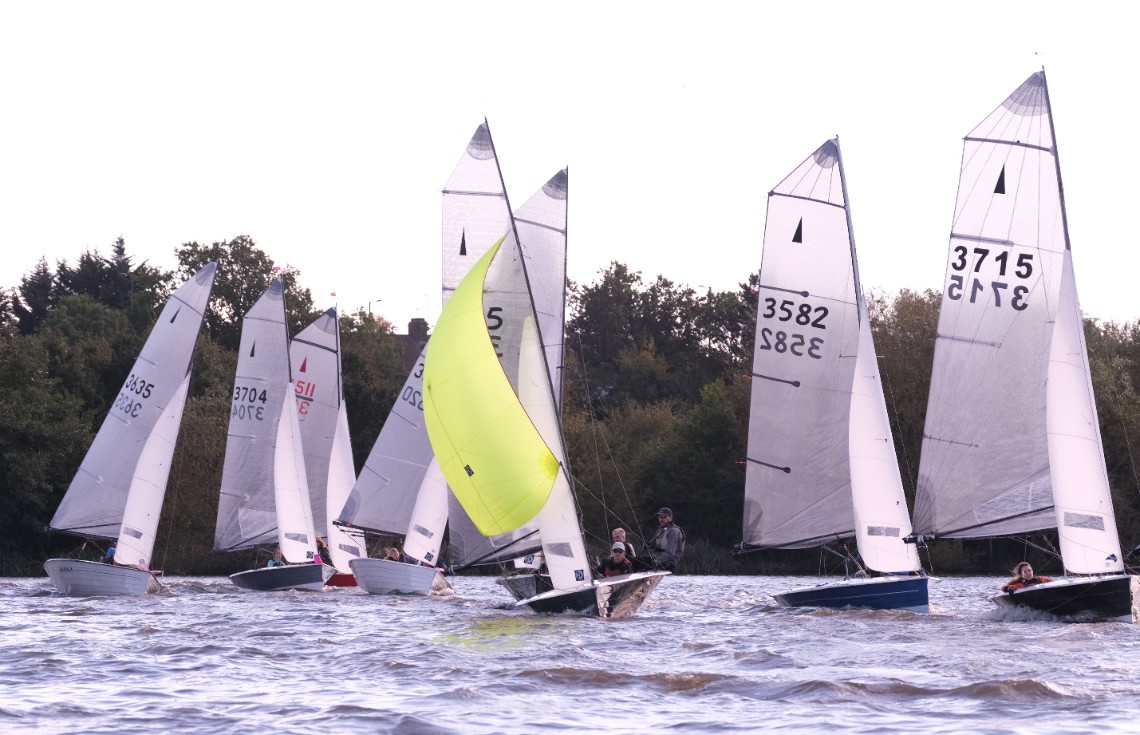 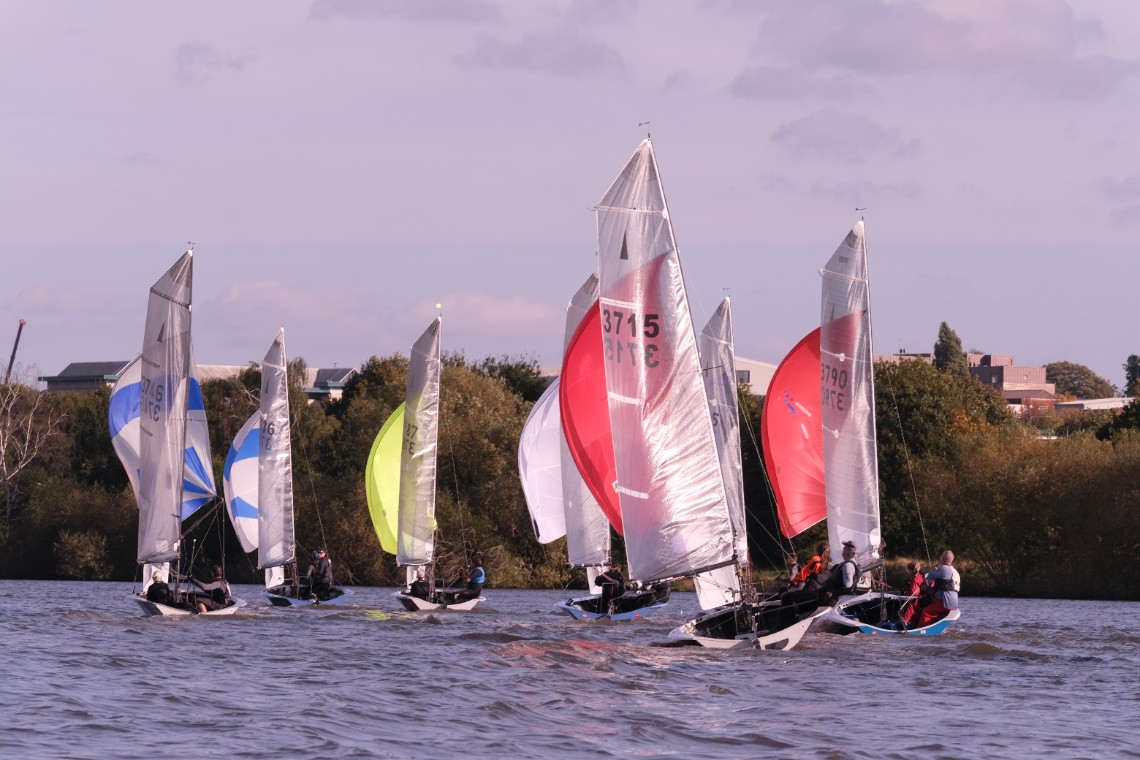 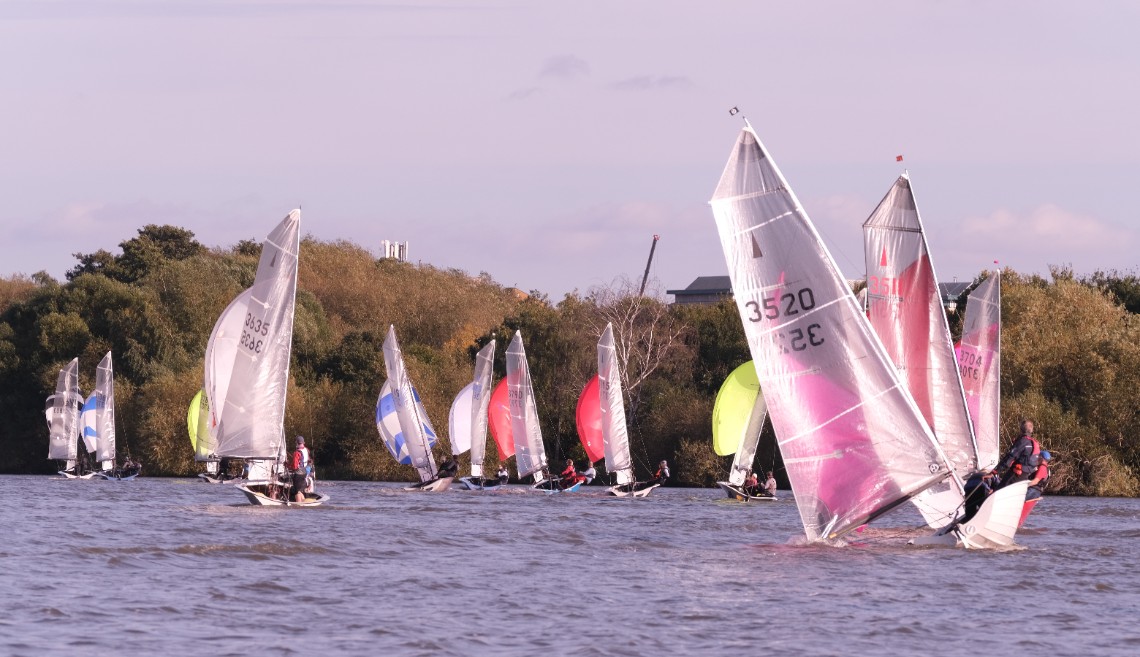 18 Merlin Rockets assembled at Wembley Sailing Club for the 2021 Merlin Rocket Silver Tiller Open Meeting sponsored by Craftinsure. Being the last ST before the lockdown in 2020, the host club were determined to put on a show for the 10 visitors including those from as far afield as Salcombe and Starcross.

The wind was generally Southerly around 10 kts gusting 17 kts with some shifty conditions just to keep the competitors on their toes.

In Race 1, the fleet got away cleanly and with the North Shore of the Welsh Harp Reservoir clearly paying, the top three emerged at the first windward mark as Matt Mee and Roger Phillips (Burghfield / Oxford) followed closely by James Wells and Anna Aylward (Starcross) with Paul Dean and Hannah Burt (Wembley) in 3rd. These three teams opened up a reasonable gap to the pack and despite Paul and Hannah using their local knowledge to nip inside James and Anna at the end of the first lap, James and Anna soon retook the position and then closely chased Matt and Roger to the finish with Paul and Hannah coming in 3rd. Arthur Henderson and Livvy Bell (Salcombe / Hampton) were solid in 4th for the entire race.

Race 2 and the fleet got away cleanly again in similar conditions to Race 1 with the same course as before. Chris Martin and Samuel Bailey (Midland) blasted off from the pin end of the line, caught the first two shifts and opened up a commanding lead from a pack of the following three or four boats where the racing was tight and the places were always up for grabs. At the end of lap 1, Chris and Sam’s lead seemed unassailable, James and Anna rounded 2nd with Chris Jennings and Pete Nicholson (Burghfield / Brightlingsea) in 3rd. Laps 2 and 3 saw Chris and Sam continue to dominate with Matt and Roger moving into 2nd place and starting to whittle away Chris and Sam’s lead with Arthur and Livvy moving into 3rd. By the final lap the lead had diminished sufficiently for ice-cool Chris to break out into a mild sweat as Matt and Roger applied the pressure to make the race interesting to the end. It finished Chris and Sam 1st, Matt and Roger 2nd and Arthur and Livvy 3rd.

By Race 3 the wind had, as predicted by the forecast, tracked South Westerly and the PRO’s John and Judy Gill decided to change the course slightly to take account of the revised direction. With the overall meeting still wide open and up to four teams still able to win the trophy, the Merlin fleet reverted to type and two general recalls ensued. The black flag was deployed for the 3rd start which made sure the eager beavers held back and the fleet got away cleanly.

Caroline Croft and Hannah Bristow (Lymington Town) took the early lead closely followed by Matt and Roger and a pack of around six other boats. Approaching the bottom mark the front pack were covering each other and no one could get away as they approached for a port rounding before the turn back to the first beat of lap 2. Caroline and Hannah and Matt and Roger clearly disagreed with the course as set by the PRO’s and decided that attempting a starboard rounding was more appropriate. The rest of the fleet disagreed and rounded to port as per the course on the committee boat. Caroline and Hannah then had to un-wind and Matt and Roger having spotted the error at the last minute executed a fast tack and gybe just before the mark to correct themselves without infringing.

Chris and Sam were the initial beneficiaries of the melee ending Lap 1 in 1st and looking good for the overall event win. They were followed by Arthur and Livvy in 2nd and Matt and Roger, having regained their composure, rounded 3rd. The race remained close and no team was able to get away and dominate. Lap 2 saw Arthur and Livvy move into 1st and they continued to lead until the they sailed into a hole allowing Matt and Roger to catch up.

The fleet returned to shore for a fantastic curry prepared by Wembley’s excellent galley team. Matt and Roger took the overall prize with their two wins, Chris and Sam finished 2nd overall with Arthur and Livvy making up the podium in 3rd. James and Anna finished 4th and first in the Silver Fleet, with Paul and Hannah keeping the flag flying for the home club in 5th and first Wembley Boat. The Bronze fleet was won by Richard Cooke and Arabella Suchy (Wembley) and the Century Cup (everyone’s favourite – helm and crew over 100 years old) was won by Colin Brockbank and Vana Vlastaki (Wembley).

It was great to see five classic boats (sail no 3600 or older) in attendance and 1st place in this category was won by Ed Chapman and Guy Breary of Thames SC.

Thanks to all the competitors and organisers. Wembley Sailing Club looks forward to seeing everyone again in March 2022. Next up the Craftinsure Silver Tiller heads to Chichester Yacht Club on Sunday 6th November.