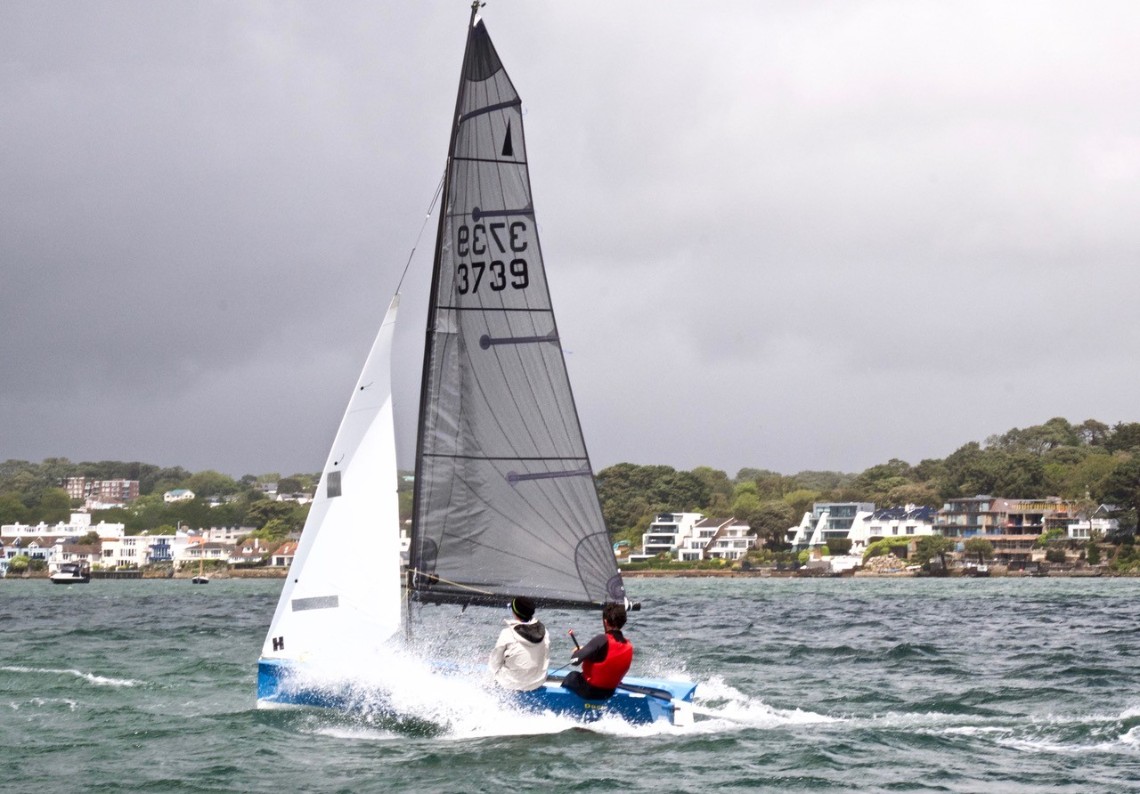 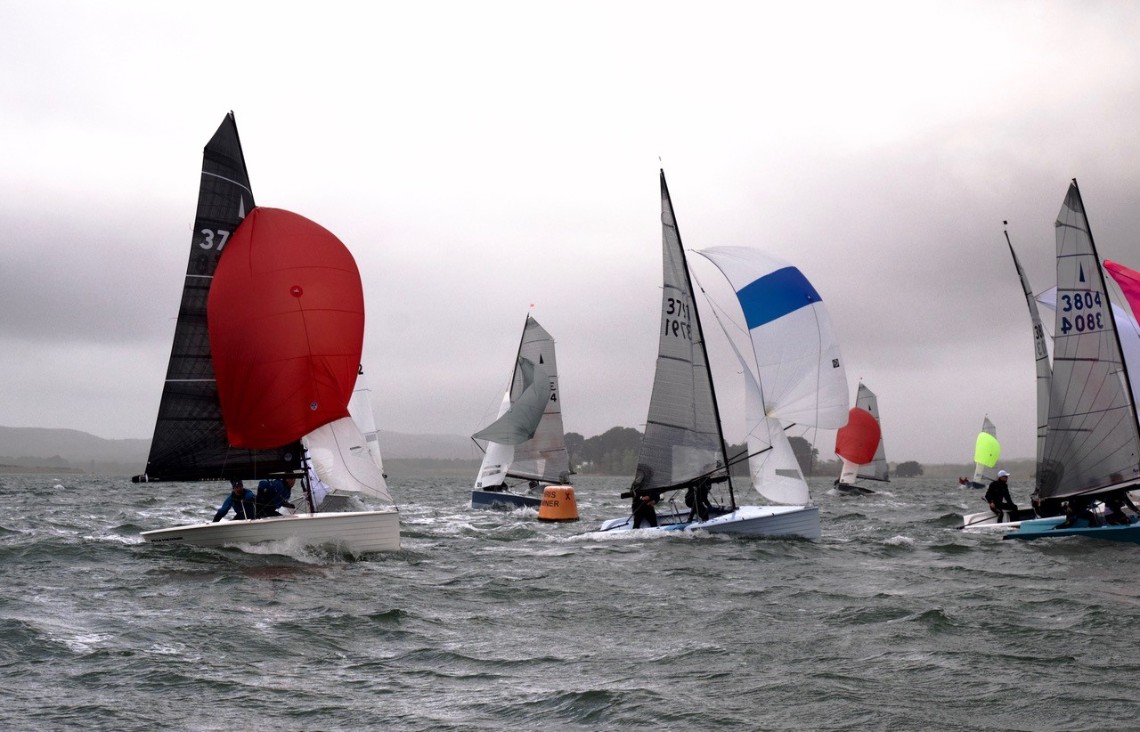 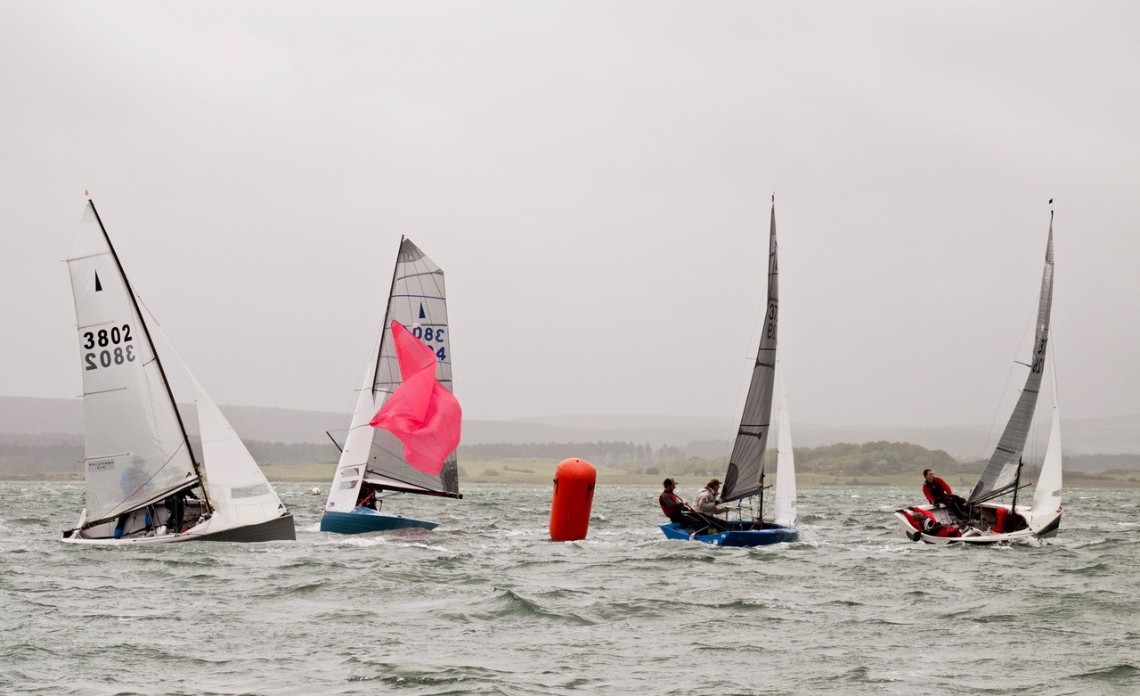 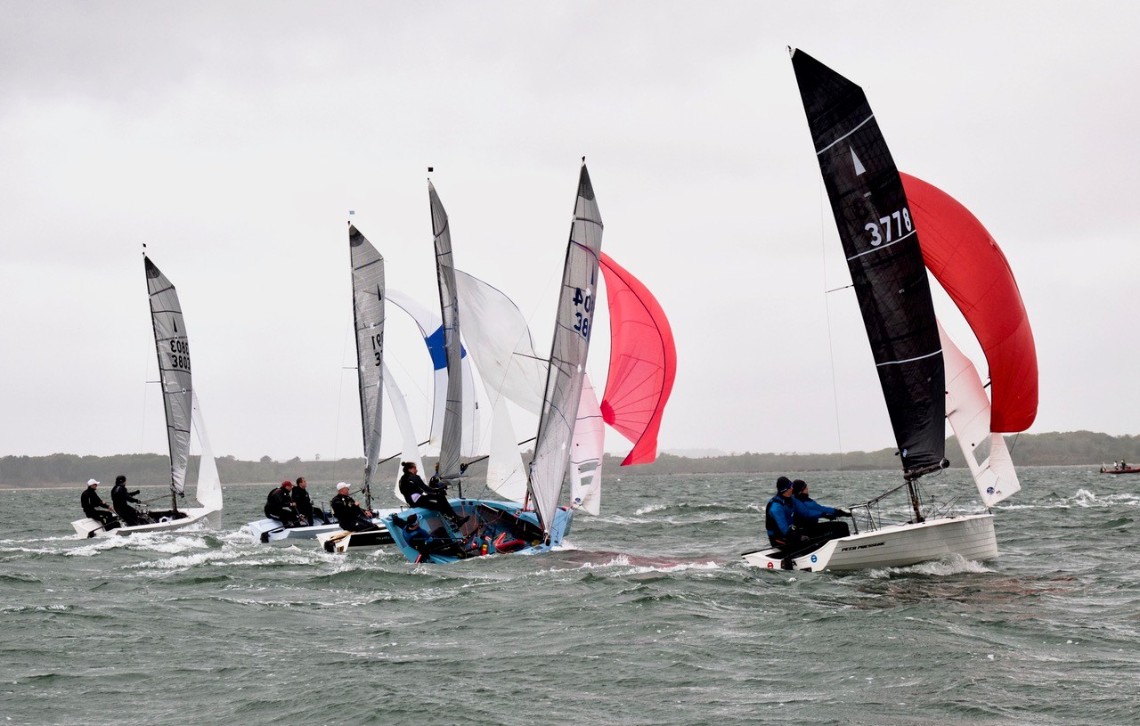 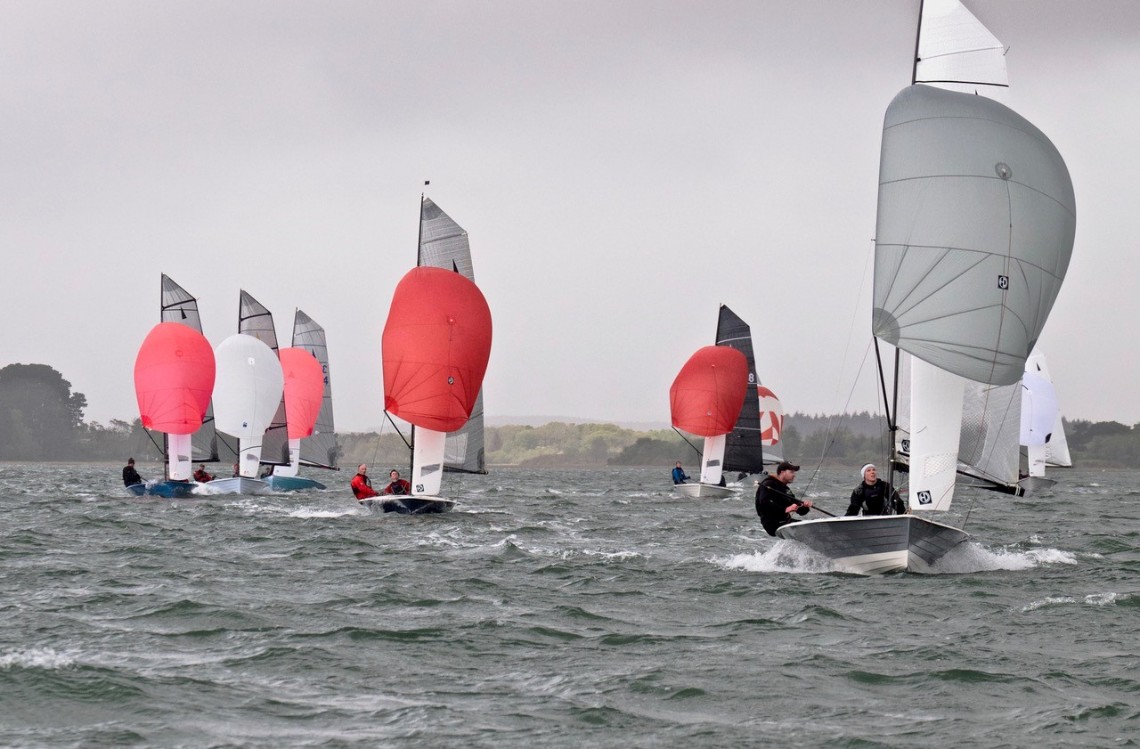 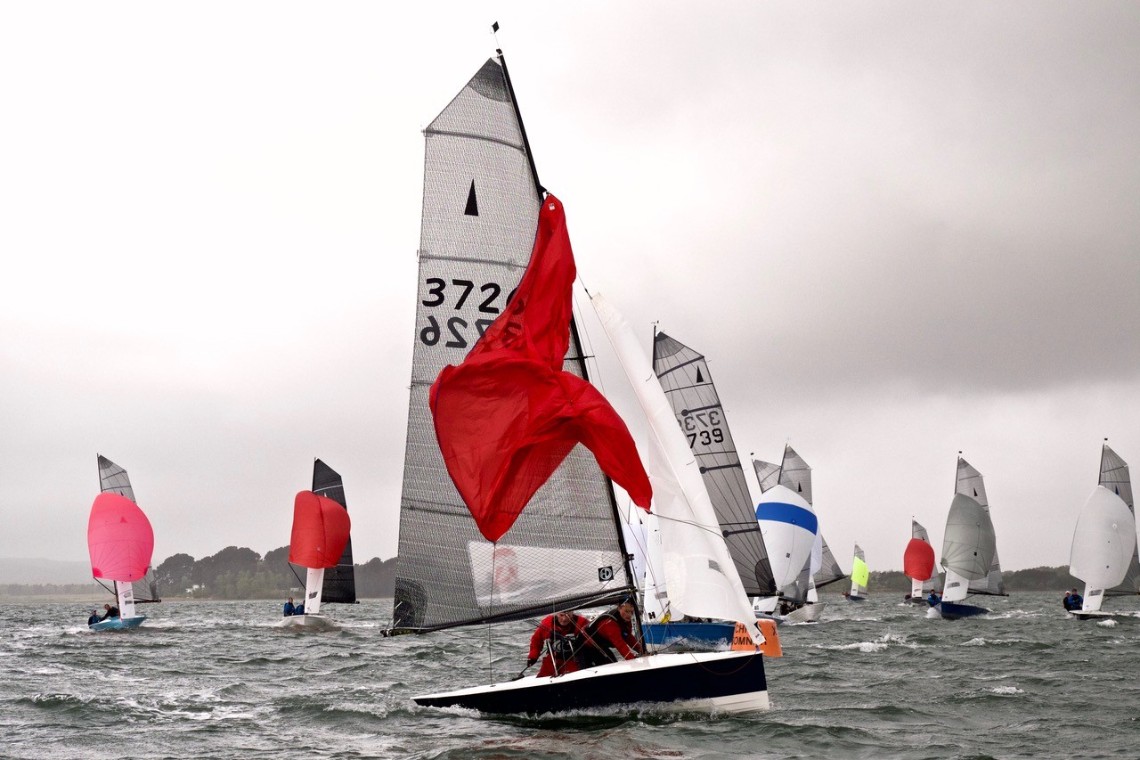 Parkstone Yacht Club welcomed the Merlin Rocket Class for an open meeting on Sunday 16th May 2021. The forecast was a fresh to frightening south-westerly with frequent rain showers to wash the salt out of our eyes. It was good to have an early briefing and no faffing around on shore to question our sanity as the race team was keen to get us out on the water for 3 back-to-back races. The plan was for two 45-minute triangle-sausage-triangle races to the west of Brownsea Island, followed by a scenic harbour tour race round the cans to finish.

A strong line up of 20 boats were pre entered, but I’m guessing a few were deterred by the forecast as only 14 of those made it to the start line.

The fleet got away first time under the U flag for race one. Christian Birrell who was being ably crewed by a handy lever in the form of Chris Kilsby, sailed a great race, extending their lead on every leg and taking the bullet while making the rest of us look like a bunch of amateurs. Taxi and Pip were in a close second until they were hit by a big squall and capsized on the kite hoist of the final triangle, allowing Jon Gorringe and Matt Currell who had no worries about hoisting the kite to sail into second, while the rest of the fleet were a bit more cautious with their hoists, and several opting for a two sail reach. Ian and Charlotte couldn’t resist the thrill of a three sail mach 10 reach in Rockatross to sail into third, but only until the gybe mark where all the fun ended very abruptly. Team Lenz and Will and Arthur Henderson cruised round the gybe mark smugly with no spinnaker in third and fourth respectively while the rest of the fleet were racing to get their boats back upright.

Race two was a general recall, but got away second time, however Christian was just a bit too keen to get course side and was penalised by the U flag unfortunately. This time Taxi and Pip kept their boat upright and the fleet behind them to take the win, followed closely by Ben and Roz, and then Jon and Matt. Another big gust hit on the final triangle which saw Tim and Mary in fourth drop the kite and tack round at the gybe mark, and Ian and Charlotte decided to follow suit whilst all kinds of carnage ensued behind.

The fleet was somewhat smaller by the start of race three after several gear failures and tired crews, but the hardy were equipped with course maps and were keen for some orienteering of Poole harbour. The first leg was an almost identical beat to the previous races which Taxi and Pip got to the windward mark first, followed by Ben and Roz. There was some shouting at Jon and Matt who did a 360, so David and Vicky sailed into third. It was then a two sail fetch to a mark just off Brownsea Island which saw Rockatross rapidly close in on the leaders and steam into second by the gybe mark where we bore off onto a run and hoisted. Not sure what happened to Ben and Roz as they suddenly death rolled and capsized to windward. Ian and Charlotte pulled ahead of Taxi and Pip on the run and then gybed round another mark to starboard and reached off to the other end of the harbour in pursuit of the lead rib who didn’t seem too certain of where they were going either. I’m not really sure what happened behind us from there to be honest, but it was windy, and fast. Once safely round the correct mark it was a fetch back up towards the starting platform where my arms were thankful that the course had been shortened. Ian and Charlotte took line honours, followed by Jon and Matt in second, Taxi and Pip in third and David and Vicky in fourth.

Huge thanks to Parkstone Yacht Club for the warm welcome as always, the efficient race team for some great courses and the rescue crews who got everyone home safely, and well done to Taxi and Pip for taking the overall win.